The Fine Line Of Funny

Nurse for Kate Middleton ‘commits suicide': cops
When does funny become offensive beyond funny?
Obviously the prank above backfired on the two morons behind the microphone in the above You Tubes, but whilst a rather thoughtless and disrespectful invasion of privacy, I can think of other comedians who have really stepped over the line looking for cheap laughs.
This above You Tube is a classic example of going WAY too far.
Every time I see Michael Richards on TV I think to myself, "there's that racist pr#ck that lost it on stage".
But there are other comedians who I think are funny most times, but just have to go and push the envelope until they deeply offend people for cheap laughs.
This is a prime example for me personally.
Here we have John Safran, who is Jewish himself, going to Israel and eating a ham sandwich at the Western Wall in Jerusalem.
Why not just take a piss on it while your at it Jon?
That's got to be worth a few laughs, too.
I'm not a religious Jew, but I choose not to eat pork out of a sense of respect to my fellow Jews, even though I don't observe Kosher laws most of the time, one thing I don't do is eat pork or pig meat.
It's just something I personally chose to do decades ago, and if other Jews like Jon wish to eat pork, it doesn't worry me, in fact  I'm the only one in my family who doesn't eat pig meat.
Of course, I would break that rule if I was starving to death and pig meat was the only food available, it's not a life or death rule to me, but to take a ham sandwich to the Western Wall and think that you are being smart by eating it on TV is just the height of disrespect. 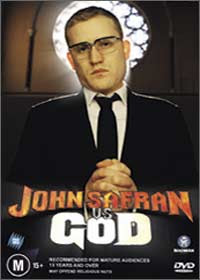 Don't get me wrong I still think Jon is a funny guy and goes to personal extremes to get a laugh, 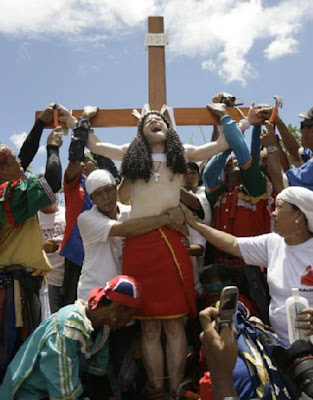 but the pork sandwich sketch I find personally offensive and not funny at all.

WARNING: THIS YOU TUBE BELOW SHOWS SOME REAL GRAPHIC SCENES OF COWS BEING SLAUGHTERED IN A MEAT FACTORY.

I really like John Safran, and if it wasn't for him I never would have met Jon Ronson at the Brisbane Powerhuse the same night I went to see Jon Safran with my kids -
The Men Who Stare at Goats and The Daughters Who Lift Cars Off Their Dads Sync 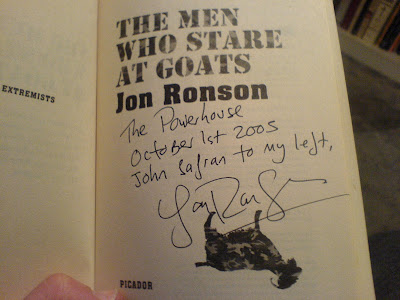 WARNING: GRAPHIC SCENE IN ABOVE YOU TUBE.
Some gags are just offensive and truly stupid and could end with you on the end of a beating by some irate person who gets offended and some pranks could end very badly indeed.
I don't know if this was a real video above...I doubt it, but the message is clear....
THINK ABOUT THE PRANK YOU PLAY, AS IT COULD BE YOUR LAST.
Or if not, one that you may never forget.
Posted by Brizdaz (Darren) at 12/09/2012 08:08:00 AM