Archerfish Dreaming embodies the metaphorical arrow,
an ancient symbol of truth, protection and fate.
Arrowheads were apparently given to Native American youths as tangible representations of the warrior spirit, as tokens to inspire clarity guidance and support. 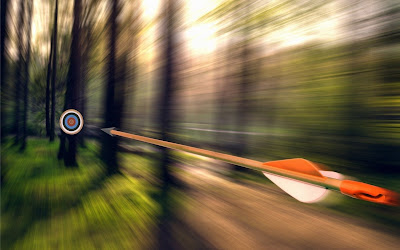 Arrows are imbued with the blessings of Spirit according to the book Animal Dreaming. 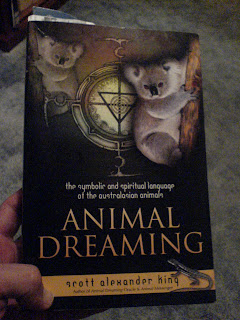 "They protect us from temptation and emotions that threaten to taint and blur our judgement.
To witness an Archerfish  take down prey is indicative or receiving the arrowhead of truth.
It confirms and blesses our life path, clarifies our destiny and guides us to spiritual enlightenment."
All well and good I thought while reading the chapter on the archerfish, but where am I going to see an archerfish sync around here?
Turns out that it might have been in front of me all along.
I've been using this bookmark (above) I bought from the post office a while back, while I have been reading the Animal Dreaming book.
It's from a range of items by a photographer named Steve Parish.
I've been buying Steve's stuff for years, especially his yearly calendars of Brisbane and surrounding areas, but I thought surely he didn't photograph this monstrous shark up close in real life?
So I turned the bookmark over to read the fine print to see where the photo was taken.
Turns out that he didn't take it at all.
It was snapped by the famous shark husband and wife team,
Ron and Valerie Taylor.
Who I wrote about in this post -
"Mental" Syncs
Had to laugh when I saw the scuba diver over the freedom sign,
which I took a shot of on the day. 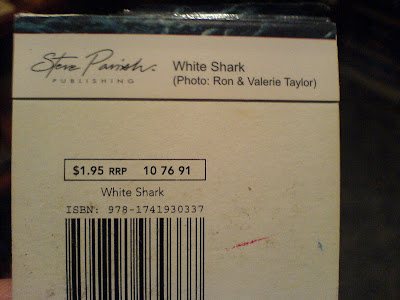 Anyway, apart from that sync in my life with Ron Taylor, at the bottom of the bookmark there is an address for Steve Parish which has the Brisbane suburb of Archerfield as his place of address.
My memories of Archerfield took me back to my first soccer club I ever played for, Acacia Ridge Soccer Club.
Acherfield Airport is pretty much next to the soccer club, and light planes would fly over the playing field all the time.
At training nights we would try and kick our footballs high enough to see if we could hit one as it came in to land.
Not much chance of that though when you only have the legs of a ten year old;-)
Planes still fly over my house today from that airport, as we are right under the flight-path, though miles away from the airport.
I lost contact with the guy who introduced me to playing for
Acacia Ridge and tried Googleing his name to see if I could find a picture of him.
He moved back to England when he was about 11, which is the last time I saw him.
We tried to stay in touch, but life just got too busy and we lost contact.
http://www.nashtackle.co.uk/nash-strikes-again-at-dreamlakes-for-alan-grainger.newsArticle#.UbPNKZzAHK5
This could be him, as he likes fishing and is an Arsenal supporter as well, but I'm not so sure it is him. 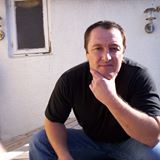 Because this guy in a picture from another search looks more like the Alan I used to know.
I might have to follow up and see? 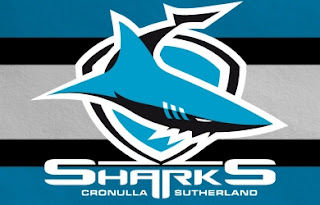 The only reason I bought the shark bookmark is because
I'm a sharks fan, I don't see the shark as a totem animal, nor the stingray.
I bought this doll just before Steve died, I think, which is spooky looking at the bookmark, since it has a stingray on it as well. 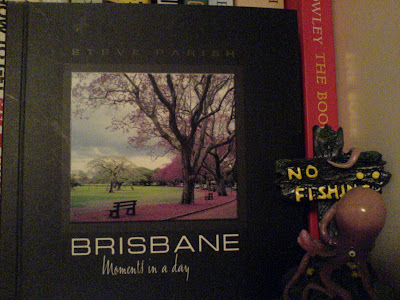 Even my Steve Parish book of Brisbane is right next to a 'No Fishing' sign on my bookcase.
And yes, that is a copy of Aleister Crowley's 'Book of the Law' behind the octopus, but I can assure you that I'm not a Satanist
(not that I think Crowley was either, by the way). 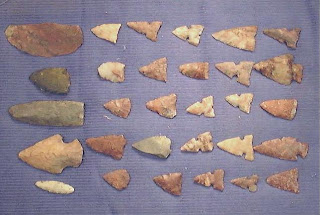 
So I hope something wonderful is about to happen with the syncs that came while reading about Archerfish.


Cricket Dreaming is meant to be a representation of good luck, so let's hope the above clip is a sign of that as well.

"When celebrated, the the chant of the Cricket delivers us into a place of beauty and inner harmony.
It helps us find the inner silence so that whatever we put our minds to while in this state, will surely come to fruition.
If nothing else, we will be gifted with unexpected good fortune." 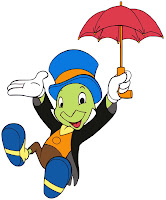 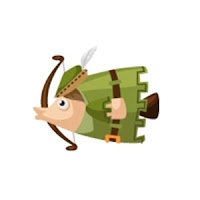 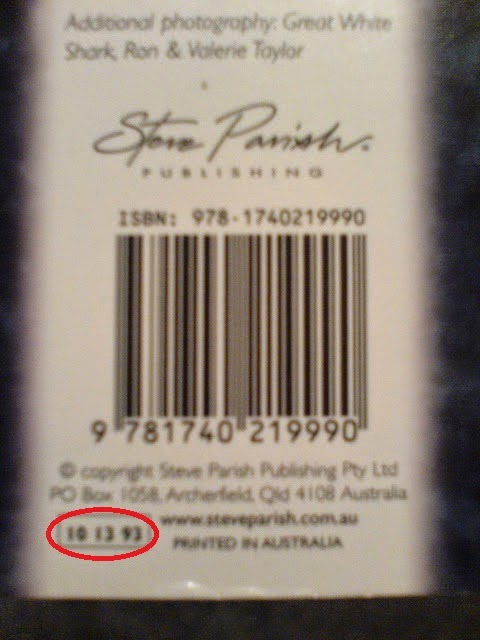 I was re-reading this old post last night and realized that there was six numbers down the bottom of my old bookmark, which I no longer have anymore, as it got all dog-eared, so I threw it out.
The six numbers 101393 I find quite relevant in my life from the bloggers that I have tendered to follow over the years.
While I've never watched much of the X-files TV shows,

Christopher Knowles at his blog The Secret Sun was always writing about the X-files production company 10 13.

The X-Files is an American science fiction drama television series created by Chris Carter, which originally aired from September 10, 1993 to May 19, 2002 on Fox.
And of course, 93 is the Thelemic greeting among followers of
Aleister Crowley's philosophy of Thelema.
1013 Occurrences in the X-Files.
October 13 is Fox Mulder's birthday.