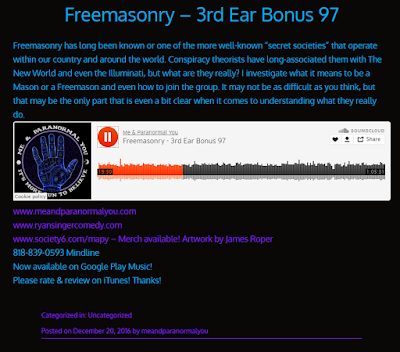 which was posted on December 20th, 2016 and then I see a news story about a stonemason who was crushed between 300 kg granite slabs on the 20th of December in the bay-side suburb of Cleveland, just outside my hometown of Brisbane.
Man dies after being crushed by granite slabs at Cleveland near Brisbane
"A stonemason has died after being crushed by two slabs of granite at a business on Brisbane's bayside.
The stonemason was killed when the 300-kilogram slabs fell off the back of a truck while it was being unloaded at Cleveland."

The weird thing apart from the date of December 20th was that Ryan says in the podcast that he recorded the episode in the state of Ohio.
Ohio is the state that the city of Cleveland is in and the stonemason was killed in the suburb of Cleveland in the Redlands Shire, just out side Brisbane, my hometown.
Eerie stuff...not the podcast, just the synchronicity.
For the record, my grandfather was a Master Mason, but I'm not a Freemason...yet;-)
Posted by Brizdaz (Darren) at 12/22/2016 05:22:00 PM