"Fortune Used to Hide in the Palm of His Hand."

"Fortune Used to Hide in the Palm of His Hand."
Bradman - Song Lyrics by Paul Kelly 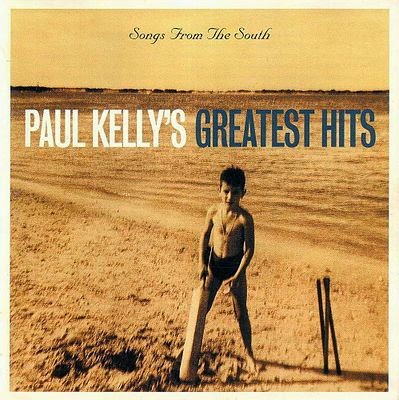 Yesterday when I went to pay for a drink I decided to get rid of my small change out of my coin wallet, so I poured out the coins into my hand and tried digging out five twenty cent pieces.
One of the coins looked strange (top photo) and at first I thought someone had slipped a game token into my change at some earlier point.
It turned out to be a 2001 special Sir Donald Bradman 20 cent coin, which I don't recall ever having had one in my possession before seeing this one.
Now in this post I did about Paul Kelly -
"... And There's So Much Water So Close to Home" Paul Kelly
I mentioned  how on page 53 of Paul's book, Paul talks of riding in a taxi with Sir Donald Bradman as a five year old.
I remember thinking after I had written the post, as to whether I should cut out the section about Donald Bradman, because I thought Bradman really had no real synchronicity to offer the story other than Paul riding in a taxi with him as a five year-old and the
"Six Degrees of Separation" thing.
That nagging little voice told me to keep it in because it would be more relevant down the track.
So I left it in against my better judgment.
What I failed to mention in that post was that Paul had written a song called Bradman, the You Tube and the lyrics appear below.
BRADMAN

Sydney, 1926, this is the story of a man
Just a kid in from the sticks, just a kid with a plan
St George took a gamble, played him in first grade
Pretty soon that young man showed them how to flash the blade
And at the age of nineteen he was playing for the State
From Adelaide to Brisbane the runs did not abate
He hit 'em hard, he hit 'em straight

A team came out from England
Wally Hammond wore his felt hat like a chief
All through the summer of '28, '29 they gave the greencaps no relief
Some reputations came to grief
They say the darkest hour is right before the dawn
And in the hour of greatest slaughter the great avenger is being born
But who then could have seen the shape of things to come
In Bradman's first test he went for eighteen and for one
They dropped him like a gun
Now big Maurice Tate was the trickiest of them all
And a man with a wisecracking habit
But there's one crack that won't stop ringing in his ears
"Hey Whitey, that's my rabbit"
Bradman never forgot it

England 1930 and the seed burst into flower
All of Jackson's grace failed him, it was Bradman was the power
He murdered them in Yorkshire,he danced for them in Kent
He laughed at them in Leicestershire, Leeds was an event
Three hundred runs he took and rewrote all the books
That really knocked those gents
The critics could not comprehend hsi nonchalant phenomenon
"Why this man is a machine," they said. "Even his friends say he isn't human"
Even friends have to cut something

Summer 1932 and Captain Douglas had a plan
When Larwood bowled to Bradman it was more than man to man
And staid Adelaide nearly boiled over as rage ruled over sense
When Oldfield hit the ground they nearly jumped the fence
Now Bill Woodill was as fine a man as ever went to wicket
And the bruises on his body that day showed that he could stick it
But to this day he's still quoted and only he could wear it
"There's two teams out there today and only one of them's playing cricket."

He was longer than a memory, bigger than a town
He feet they used to sparkle and he always kept them on the ground
Fathers took their sons who never lost the sound of the roar of the grandstand

Now shadows they grow longer and there's so mush more yet to be told
But we're not getting any younger, so let the part tell the whole
Now the players all wear colours, the circus is in town
I can no longer go down there, down to that sacred ground

Interestingly,repeated over and over are the lyrics,
"... cause fortune used to hide in the palm of his hand".
Which got me to thinking about the coin in my hand of Bradman, and to what significance that was to me as a sync.
Cricket is the equivalent of Baseball to us Aussies.
It's played in the summer months and is as similar as it is different to Baseball in terms of meaning.
Both sports are played on a large grass field, both have batsmen who try to score "runs" after hitting a ball ... and both sports can be pretty boring at times;-)
Now, oddly enough I had ordered two books and a DVD from Amazon a few weeks ago (see photo above).
One was The Book of the Hopi, a book I had read at 16 years of age, but had since given away, or lost, and the other book was
Shoeless Joe by W.P.Kinsella, the novel which the movie
Field of Dreams was based on.
I had not read it and something (that little voice, again) told me I should.
Having seen the movie a few times, I tossed the book in the "to read" pile and promised "one day I'll make an effort" to the voice.
But while trying to figure out this coin sync and the connection to Paul's song about Bradman, I realized that to Paul, Bradman is a bit like "Shoeless" Joe is to Kinsella.
So, I pulled the book out of the pile, and strike me pink.
Looking at the photo of Joe on the cover of the book and pictures of Paul Kelly sent chills through my spine.
Not only that, I came across another Paul Kelly who is a real baseball player who was with the Minnesota Twins baseball team!?
Then I thought,"give me another sign as to whether I should read this book now, and it's a deal".
So, I started reading the first few pages to see if there was a sync ... and on page nine of Shoeless Joe I read this passage, "The second spring, on a tooth-achy May evening, a covering of black clouds lumbered off westward like ghosts of buffalo, and the sky became the cold color of a silver coin."
Can you guess which book I'm reading Now?-) 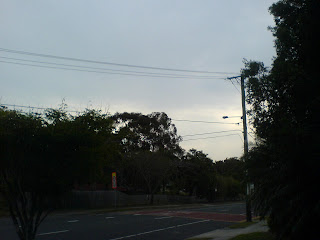 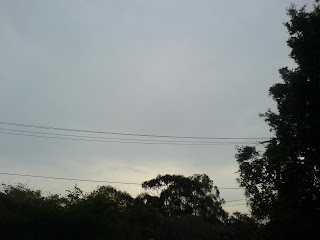 Oh, and I just stepped out to get my mail and what colour do you think the 4 o'clock sky was?
Silver coin colour springs to mind for some reason;-)
And it appears "black clouds lumbering off westward like ghosts of buffalo" seem to be building also.
Posted by Brizdaz (Darren) at 9/28/2011 04:23:00 PM