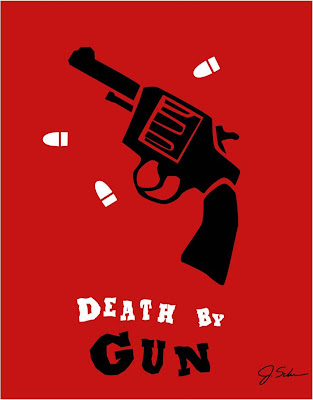 It was about this great idea of starting a "Death Cafe" in Columbus,Ohio, USA.
The first "Death Cafe" night was held on the 19th July, 2012.

As a reward for Kickstarter donators the four above T-shirts were designed.
As Lizzy explains on her blog;
Mirror Synchronicity: Death Cafe & Death By Gun

"Death By Gun art is now the thorn in my side.
I should have trusted my instincts.
Only one person ordered the t-shirt, but there was a minimum order of 12 per image.
My vendor suggested that maybe I might want to ask the donor if they would be willing to switch to another shirt.
I said I didn't want to ask that because they donated the money already and I did not want to put them on the spot.
I also happen to know the person who requested the shirt and I know that he really likes video games.
Other than that he is a liberal.
So I resigned myself to buying 11 extra Death By Gun t-shirts, thinking that I'd have to figure out a way to sell them.
Here's where I see the synchronicity with the shirt.
Our first Death Cafe in the U.S. was July 19.
We talked about all sorts of subjects related to death, dying and living.
Then later that evening, after midnight, the Aurora shootings happened.
Sadly, this event re-focused America on the subject of death.
It also re-opened the whole gun debate in America."
The synchronicity I found the darkest here though was that Lizzy was forced to buy 12 designs, as that was the minimum order for each T-shirt design.
And the Aurora shootings ended with 12 fatalities.
But here is another comment that turns out to be a sync on this dark night - on Lizzy's Kickstarter page she said;
"Death By...I do have a wry sense of humor and I thought it would be funny to have my artist friend J. Schuh draw the worst deaths… kind of as a “face your fear” philosophy.
He drew me four styles that you will be able to select from for t-shirts, postcards, and prints.

But my fears may not be yours, and for $1,000, he will create custom art for people who have…unique fears, such as Coulrophobia. 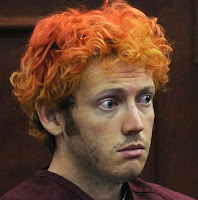 Strange and dark synchro, for sure.

Holmes looks demented in that photo, the dark trickster who lost his way.

How do I get a Death by Gun shirt?

and try to contact Lizzy the blog owner,she's the one selling the shirts.