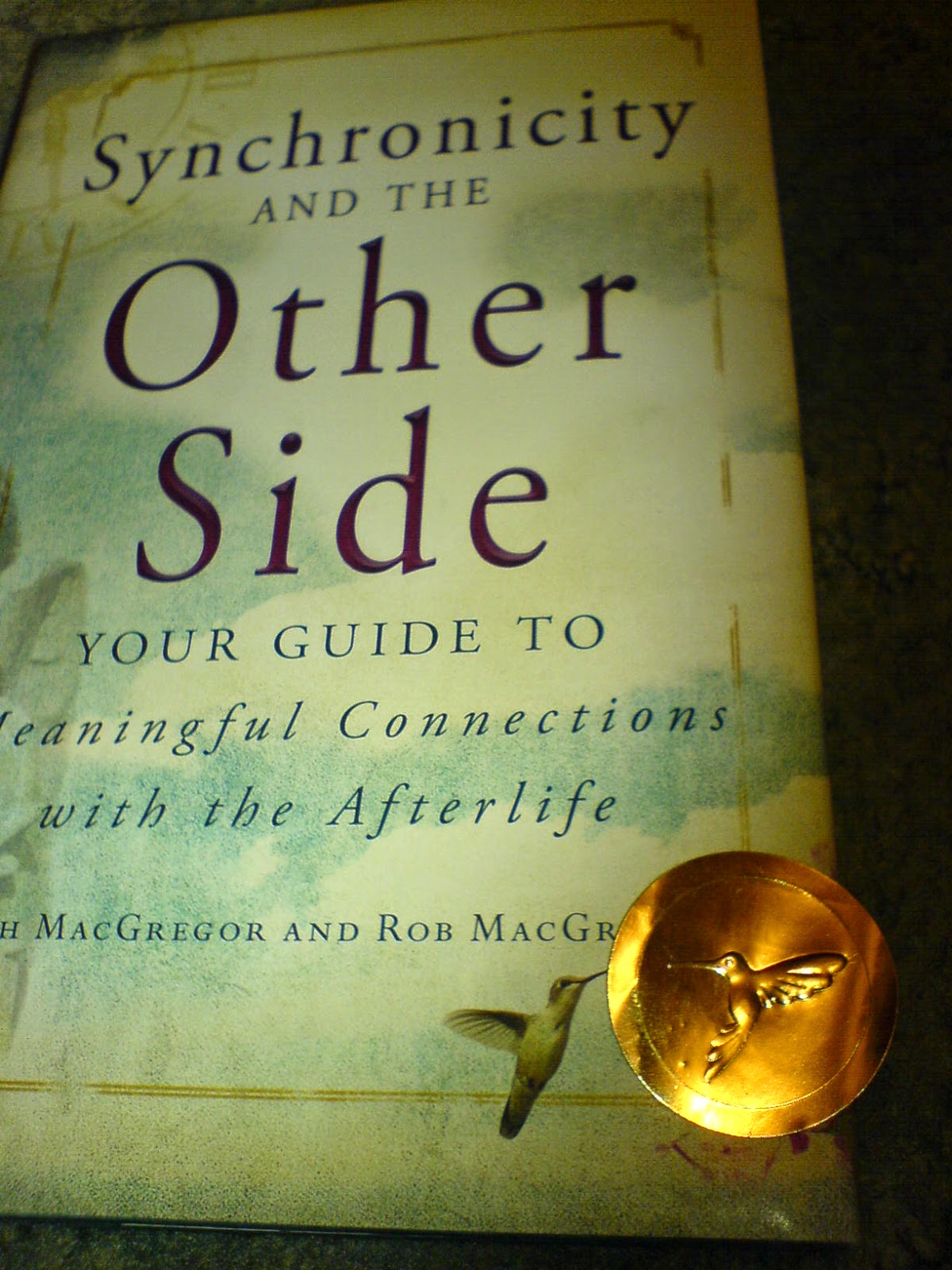 I read a news story the other day about Zelda Williams getting a tattoo of a hummingbird on her hand to remind her of her father.
'For Poppo': Robin Williams' daughter Zelda pays tribute to late actor with hummingbird hand tattoo 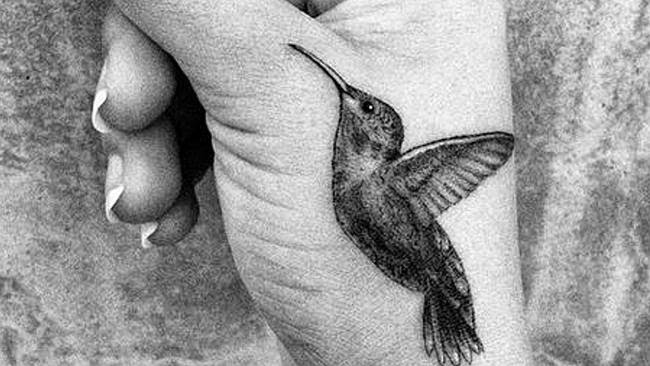 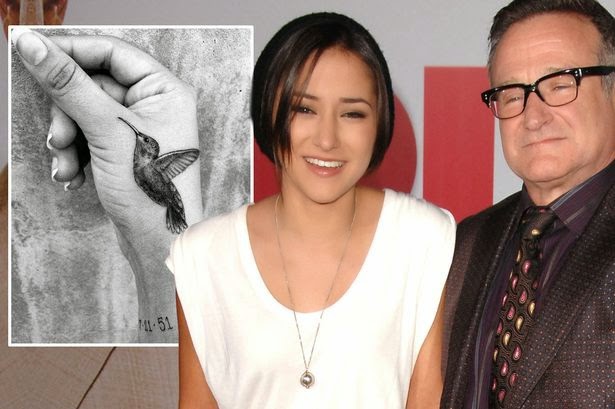 It reminded me of the hummingbird on the cover of a book that featured two of, what seemed to me anyway, my unearthly experiences after spirits of earthly beings I recently knew had departed this earthly realm.
With one of those experiences featuring a bird message,although it was a Rainbow Lorikeet instead of a hummingbird. 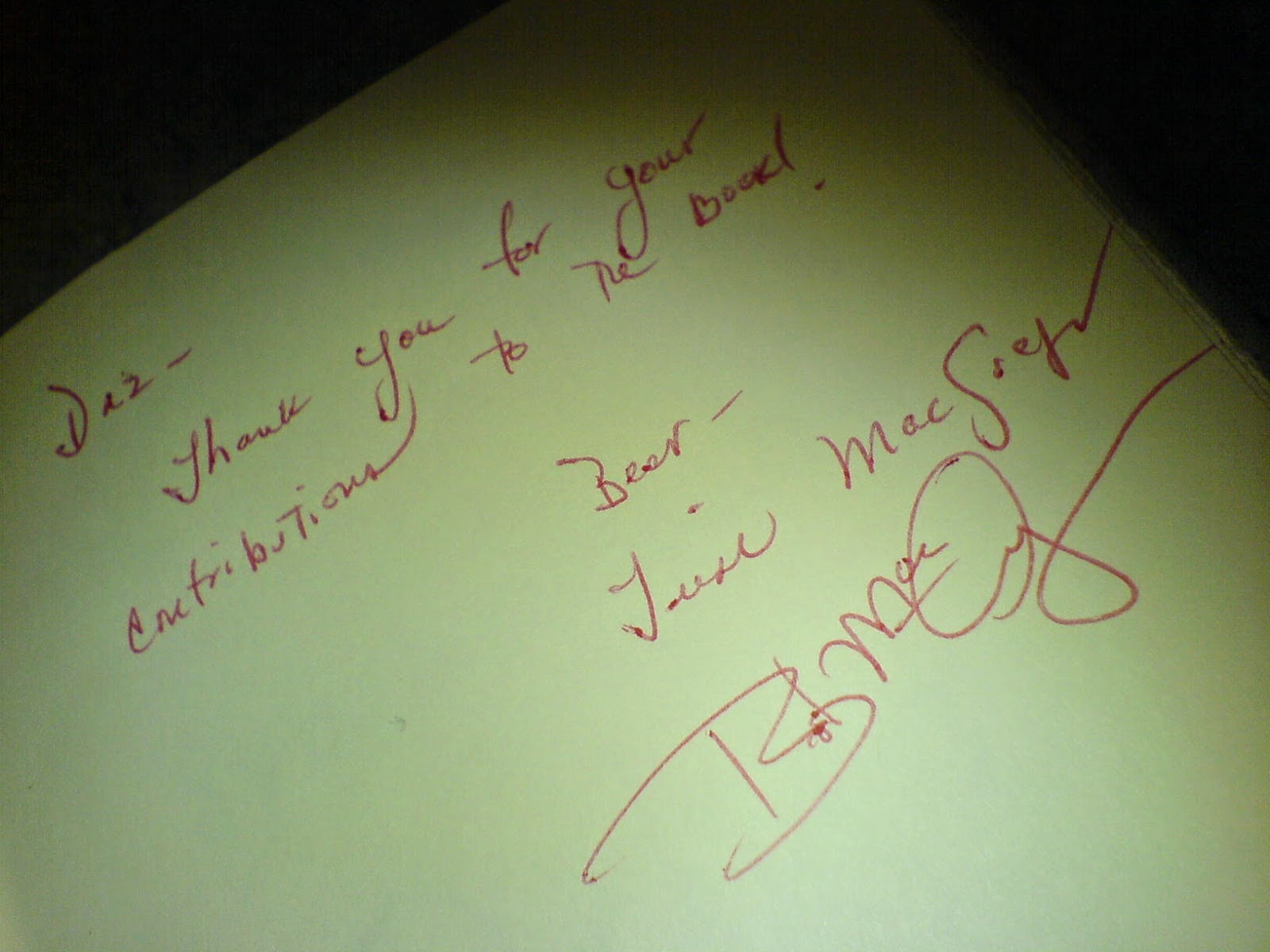 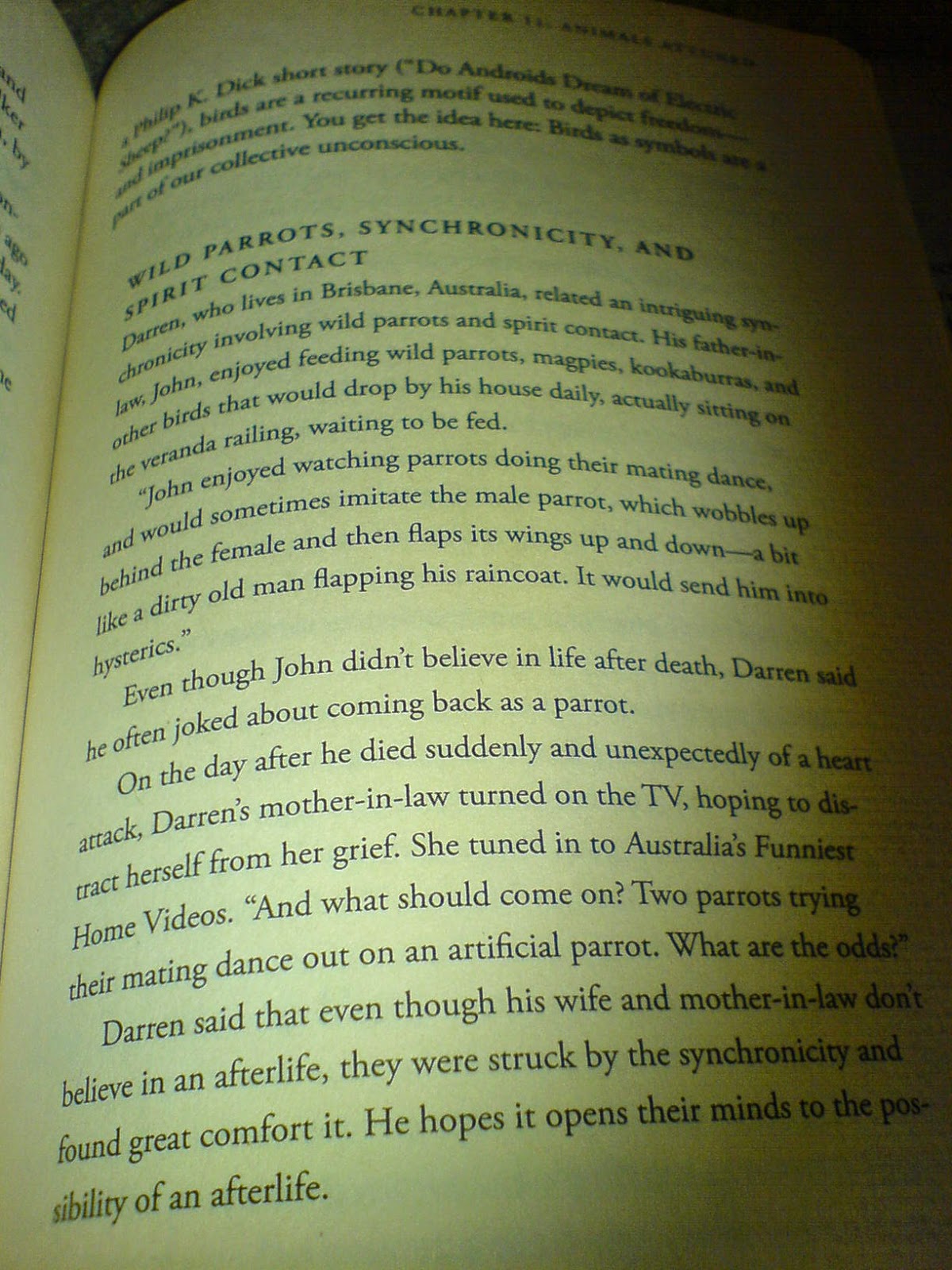 I also thought about the Sacred Kingfisher hitting my window the weekend that marked my dead father-in-law's birthday anniversary (something I failed to realize for quite some weeks after the Kingfisher hit my window).
The Bird that Flew into the Window 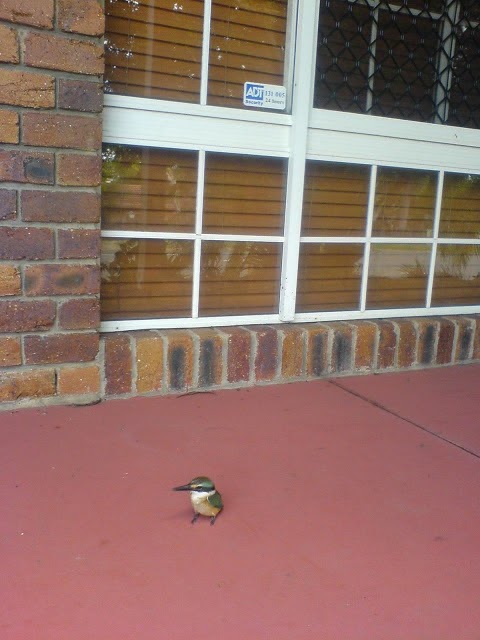 That post really kick-started my blogging off, something I never would have considered doing until then.
I only started this blog to reply to other bloggers I was following at the time, who required that you be a blogger if you wanted to reply to their posts, or comments.
I never even considered writing my own posts, until the day I had photographed a bird species, that till this day,  I have never seen flying around my home again. 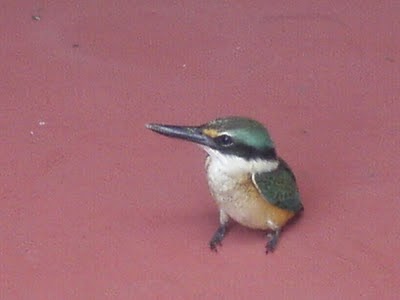 I thought if a hummingbird were to appear in my yard like the Sacred Kingfisher did then that would have to be a sign of something beyond trying to send me a message.
The next day when I arrived home and stepped out of my car, I saw what I thought was a gold coin laying on the driveway. 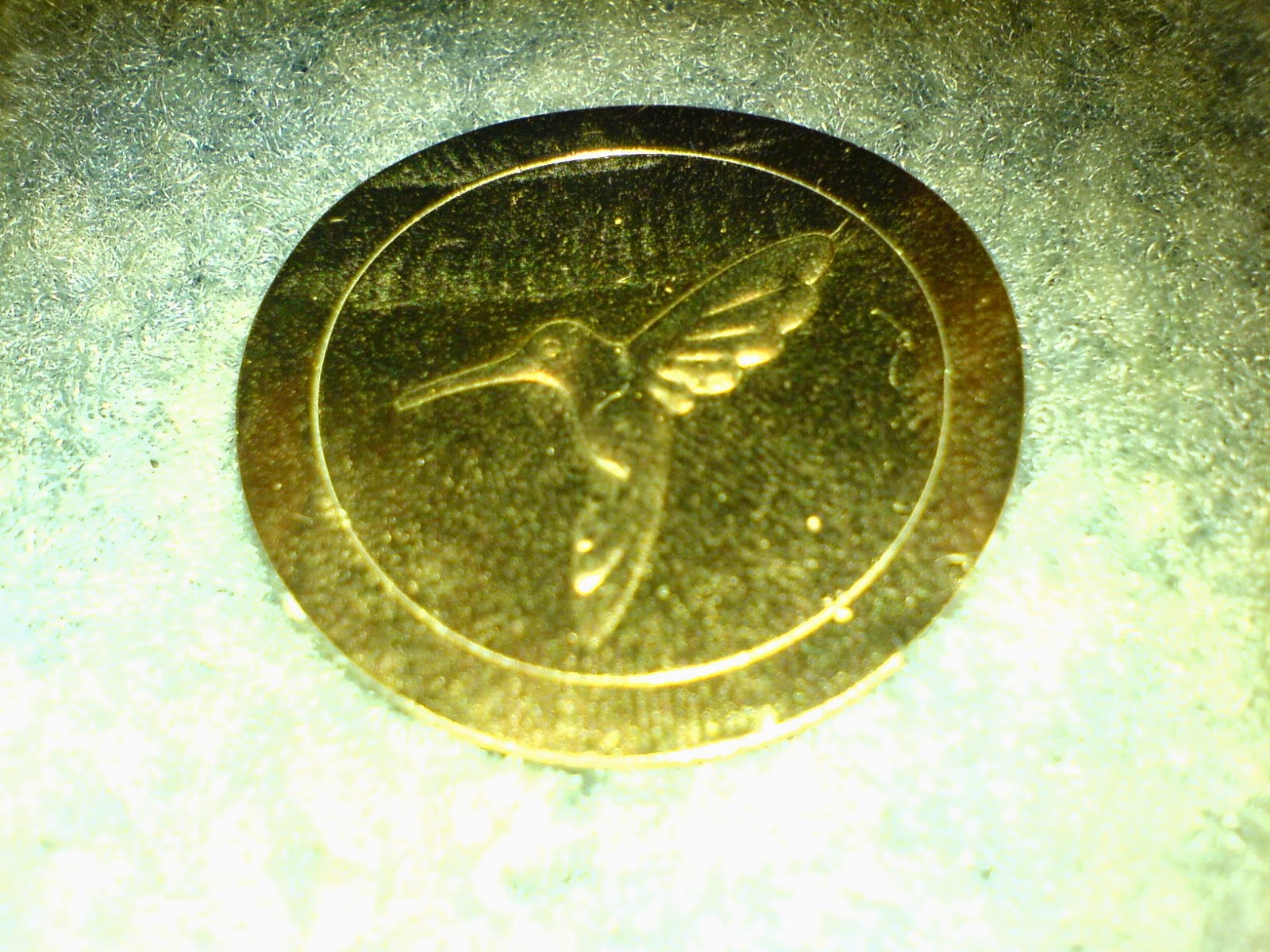 It turned out to be some kind of golden foiled wrapper, or seal of something with a hummingbird image on it.
How it came to be on my driveway, I hadn't a clue.
I've never seen anything like it in my groceries and no one in the house knew what it was off, so I assume the wind blew it from up my street somewhere and to my driveway.
I took this as a sign, to be the next best thing to a hummingbird being in my yard, as in Australia we don't have hummingbirds in the wild.
Looking up the symbolical meaning of the hummingbird I found this passage -
"The hummingbird also possesses an unusual hovering pattern, and is able to move its wings in a figure of eight pattern, a symbol for infinity.
This holds a message for us – often we find ourselves stuck in time, regretting or longing for the past, or hoping that the future will bring better things, building castles in the sky.
We are shown how to view the past and then let go, rather than be continuously caught up in it, we learn how to appreciate that the past creates are future, and that even at the time some lessons were harsh and hurtful ones, we wouldn’t be who we are without these lessons today. We need the past to create the future, but mustn’t dwell in it, yet we may reflect on it but not in a bitter cant-let-go manner.

If we become the observer of our lives by moving back a step, our lives will be viewed differently.
Hummingbird teaches us to go beyond time and to see that what happened in the past and what may happen in the future is not nearly as important as what is occurring now.
Remember to hover in the moment, and to appreciate its sweetness.
Drink deeply of the nectar of life."
Hummingbird Power Animal Messenger Of Joy
I thought no more about the hummingbird image until I went to Rob and Trish MacGregor's blog that night and read their latest post -
Synchros with the dead
"Ian Rozario of Prague, Czech Republic, asks this question:
Does anyone have synchronistic messages from friends or family who have passed away?
Well, we’ve heard some stories.
In fact, we gathered them together in
Synchronicity and the Other Side: Meaningful Connections with the Afterlife
(Adams Media, 2011).
But maybe if we’d heard Ian’s own story about his friend, we would’ve included it.
Especially because of the name and nickname of Ian’s friend.
But I’m getting ahead of myself.
Ian began by saying that he was convinced that his father was repeatedly contacting him over the past two years.
He was doing so through the medium of music.
There’s a popular song from 1988 that Ian associates with his father.
He has been hearing it again and again.
He even saw someone on the street performing the song.
He also noted that he doesn’t listen regularly to the radio limiting his expose to music.
“The first time I affirmed a request to hear from him, I literally picked up the phone to call a company, was transferred to the other side of the world to a customer service centre, and was placed on hold.
The song playing whilst I sat waiting was the song from 1988. Subsequently, I have had the same synch with other friends and family here in Prague.
And on one occasion sat down with some ‘informed’ parties at a a cafe, to hear a street performer singing it live .”
Then Ian went on to talk about his late friend.
“The other day I thought about one of my closest friends who sadly died in his early 30s.
I wondered why I had never had any messages from him.
His name was Darren.
As I finished that thought, I was entering a park with my dog.
I turned a corner, and there in huge letters (5ft by 5ft) was the name ‘Daz’ spray-painted on the wall.
Daz was Darren’s nickname.”
So, besides the synchro for Ian  with his deceased friend, there’s the oddity that we know another Darren, who visits here frequently, who has the exact same nickname—Daz.
Is this a common nickname for people named Darren? we wonder.
If not, then it’s really a peculiar synchro."
So, all these weird synchronicities seem to have flown to me reading about Zelda Williams' hummingbird tattoo...pardon the pun. :-) 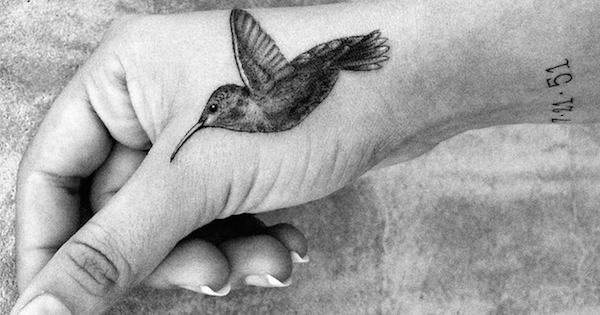 Wow, what a personal sync! Earlier today, I was looking over my paper ephemera for my art journal, and thought about using my gold foil hummingbird stickers on my next page! I like your site.