Synchronicity: It's NOT All Good 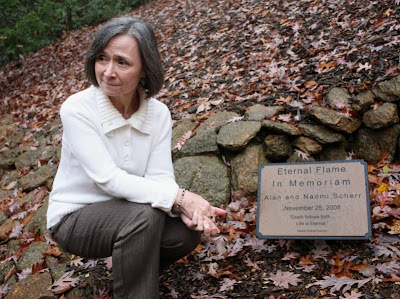 "Two Americans killed in the Mumbai terrorist attacks and several others who were injured had been traveling together in India on a pilgrimage with the
Synchronicity Foundation, a meditation group based in Virginia.
Bobbie Garvey, the vice president of Synchronicity, said today at a press conference that two members of the group, Alan Scherr, 58, and his daughter, Naomi, 13, were killed in the attacks.
Among the 25 people from the group who had traveled to Mumbai, four were Canadians, five were Australian, and 16 were American, said Garvey.
In addition to the two reported deaths, four other members were injured, including two women from Tennessee.
Synchronicity was founded by Master Charles Cannon in 1983 and is based in Nellysford, Va. Cannon had led the trip to Mumbai, said Garvey, after group members had asked him to include them on his frequent trips around the world.
"This is the first time [this pilgrimage] has occurred," Garvey said.
"Master Charles, in his own right, travels the world and teaches high-tech meditation.
"So, when he goes to India, everyone wants to go with him and they all say they want to see what he's always talking about," said Garvey.
"He finally said, 'OK.'"
The group arrived in Mumbai on Nov. 14 and was scheduled to leave on Dec. 1 --
just five days after terrorists attacked the Oberoi Hotel where Cannon and his followers had been staying.
"We thought this was the trip of a lifetime," said Garvey.
"And it was -- until Wednesday."
Garvey reported having received several calls from the travelers excited about what they had seen and learned during their trip.
At the vast 450-acre sanctuary in Virginia, 12 monastic monks live on the property in addition to Cannon.
About 30 other members of the community -- including Scherr's family -- live in nearby homes, said Garvey.
Scherr had moved his family to the sanctuary when Naomi was just two months old, said Garvey.
The foundation profits from products and programs they offer throughout the year -- including CDs recorded by Cannon that are designed to help at-home meditation.
At the press conference, with one of the group's CDs playing in the background, Garvey said quote books and biographies are also available for purchase.
People travel from all over the world several times a year to attend Synchronicity programs, including seminars that teach people meditation and conscious living.
Mentoring is also offered.
Cannon, who, on the Synchronicity Web site, calls himself a "master of meditation," describes his early years as being "marked by spontaneous, metanormal experiences of expanded, heightened and holistic states of awareness."
Having studied in India for several years, Cannon says he was trained in mysticism and intitiated as a Vedic monk under the name H.H. Swami Vivekananda Saraswati.
The recordings by Cannon use binaural-beat technology to induce meditative states, according to the site.
A local Charlottesville newspaper reported in 2007 that, according to Cannon, the Virgin Mary had been making daily visits to the Virginia sanctuary for more than a year.
"Her basic message, which she says every time she appears is, 'I appear that you might know the truth of who you are and what life is.'
Then she goes on to say, 'Life is divine, you are alive, you are divine, all and everything is divine,'" Cannon told the paper."
Synchronicity Members Are Victims in Mumbai
Expanding Mind – The Politics of Synchronicity – 10/27/13
Congressional exorcism, magical thinking, and the technology of serendipity: Erik and Maja talk about divination today.
Posted by Brizdaz (Darren) at 11/12/2013 08:36:00 AM