"There are complexities and wonderment in life we simply cannot explain.
When we look to science and religion, we can't always find the answers.
Have you ever experienced deja-vu, coincidences, or dreams that may have seemed real?
Have you ever wondered what exactly qualifies as human consciousness?
Reality vs. Abstract?" 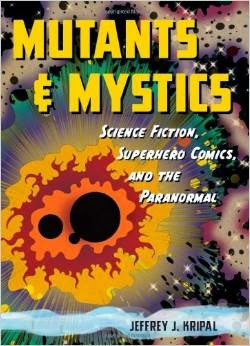 "In Mutants and Mystics, Kripal offers a brilliantly insightful account of how comic book heroes have helped their creators and fans alike explore and express a wealth of paranormal experiences ignored by mainstream science.
Delving deeply into the work of major figures in the field—
from Jack Kirby’s cosmic superhero sagas and Philip K. Dick’s futuristic head-trips to Alan Moore’s sex magic and Whitley Strieber’s communion with visitors—
Kripal shows how creators turned to science fiction to convey the reality of the inexplicable and the paranormal they experienced in their lives.
Expanded consciousness found its language in the metaphors of sci-fi—incredible powers, unprecedented mutations, time-loops and vast intergalactic intelligences—and the deeper influences of mythology and religion that these in turn drew from;
the wildly creative work that followed caught the imaginations of millions.
Moving deftly from Cold War science and Fredric Wertham's anticomics crusade to gnostic revelation and alien abduction, Kripal spins out a hidden history of American culture, rich with mythical themes and shot through with an awareness that there are other realities far beyond our everyday understanding." 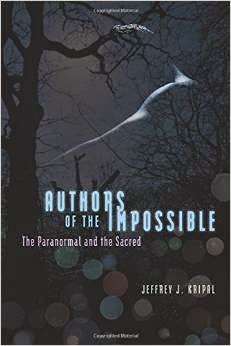 Most scholars dismiss research into the paranormal as pseudoscience, a frivolous pursuit for the paranoid or gullible.
Even historians of religion, whose work naturally attends to events beyond the realm of empirical science, have shown scant interest in the subject.
But the history of psychical phenomena, Jeffrey J. Kripal contends, is an untapped source of insight into the sacred and by tracing that history through the last two centuries of Western thought we can see its potential centrality to the critical study of religion.
Kripal grounds his study in the work of four major figures in the history of paranormal research:
psychical researcher Frederic Myers; writer and humorist Charles Fort; astronomer, computer scientist, and ufologist Jacques Vallee; and philosopher and sociologist Bertrand Méheust. Through incisive analyses of these thinkers, Kripal ushers the reader into a beguiling world somewhere between fact, fiction, and fraud.
The cultural history of telepathy, teleportation, and UFOs;
a ghostly love story; the occult dimensions of science fiction;
cold war psychic espionage;
galactic colonialism; and the intimate relationship between consciousness and culture all come together in
Authors of the Impossible, a dazzling and profound look at how the paranormal bridges the sacred and the scientific.