You're Never Weird on the Internet (almost): A Shining Example...Maybe? 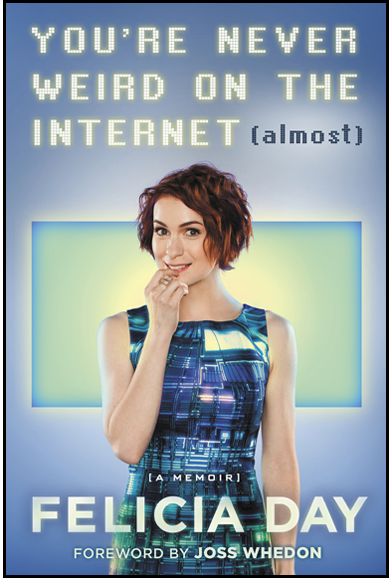 I just finished reading Felicia Day's new book
You're Never Weird On The Internet (Almost): A Memoir.
Funny thing was that I had never heard of Felicia Day, or her show The Guild before I started reading her book.
I picked it up because being a weird blogger myself in a way, I just wondered how weird a blogger she was compared to my work.
Now I've finished watching the whole 6 seasons of The Guild in a few days.
I stumbled over her book when I went looking for a copy of
King's The Shining (which I have never read before), but I couldn't find it in any bookstore I looked in that day, so I sent away for a copy over the internet and it arrived in the post today, as I just finished Day's book.
I thought it was time to read King's book, as I have watched Kubrick's movie version of King's book many times, and thought it was time to see what the difference between the two are and see why King was so pissed off about the movie Kubrick made.
This post here (if you finish reading it) is bound to keep my blog in the "almost" category of her book title, I'm sure most readers here will be thinking.
I couldn't help thinking how funny (or synchy) it was that on page 217 of Felicia's book (217 was the number of the infamous room in King's novel, although it was renumbered 237 in the movie) she complains basically that all work and no play makes Felicia a dull girl.
Hmm.
But check out page 237 of Felicia's book, remembering the nightmare room in the movie version is 237.

On page 237 of her book Felicia tells of one of the biggest nightmares of her career she encountered with internet bullies and trolls after making a song clip titled Gamer Girl, Country Boy.


On the subject of trolls and Eastwood (watch BTTF3 for the Eastwood connection here) I was involved with the narrator and some other guys in putting together a clip that went moderately
viral thanks to Chris Hardwick trying to take the piss out of it on his comedy show, but I get the impression that Chris was secretly impressed by our little video with the amount of exposure he gave it.

BACK TO THE FUTURE predicts 9/11

@Midnight Facebook page with 9/11/BTTF rant
What's Chris Hardwick got to do with Felicia Day you might be asking, but it's a small world, because I found this bowling showdown on You Tube between Felicia's Geek & Sundry team and Chris Hardwick's Nerdists team.
Sync Quick News 21: After Midnight

I also thought it was rather synchy that in our BTTF/9/11 video Joe puts a lot of emphasis on the TWIN PINES becoming the LONE PINE and when Felicia makes a video of her Aussie trip on The Flog, she visits LONE PINE koala sanctuary.
Now, I'm not suggesting that Felicia and Chris are involved in some type of conspiracy with Bob Zemeckis and have insider information on the events surrounding 9/11, or anything like that, I am just showing you the cosmic coincidences involved linking things together in some weird life undercurrent, or cosmic joke, depending on your POV.
Not to say that there aren't real life conspiracies, such as may be the case with 9/11, I'm just saying none of the people mentioned in this post had insider information on the events of 9/11. 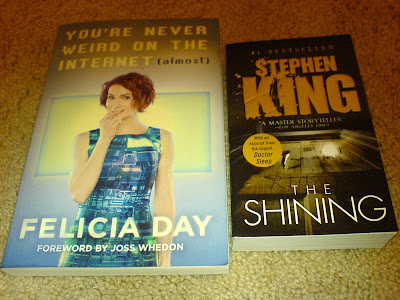 The thing I find weird is that I go into the book section trying to get a copy of The Shining and end up coming out with a great book buy someone I had never heard of before, who created a funny show about Gamers that I had not heard of before either, and yet even though I'm not a Gamer I do a lot of web surfing, so I'm amazed that I have never run across any of Felicia's work before. 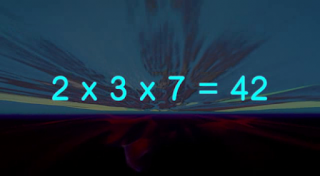 It's a small world, but it's a big internet, or so it seems.
It's a great book whether you are into gaming, or not and Felicia's message seems to hark back to a message out of this old blogpost of mine,
The Message...Just Be Yourself
Aren't you sick to death of seeing shows like the above where three "experts" tell you how you should perform to please the general public?

Maybe we should ask ourselves what Jesus would do in this situation?-)

If Joe Hill needs a little help with set design for the TV version of his book, I noticed Felicia has experience in Christmasland set design, going by the picture on page 151 of her book.
Christmasland: A Psychedelic State?
And my message is that everything seems to be connected.
Too weird you say?
Almost?-)
Posted by Brizdaz (Darren) at 12/09/2015 11:45:00 PM