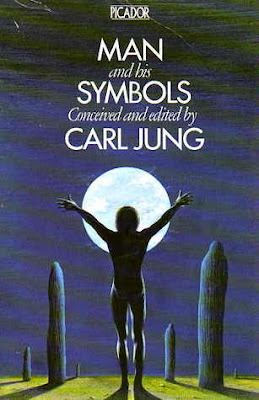 Man and His Symbols
"Man and His Symbols is the last work undertaken by Carl Jung before his death in 1961.
First published in 1964, it is divided into five parts, four of which were written by associates of Jung: Marie-Louise von Franz,
Joseph L. Henderson, Aniela Jaffé, and Jolande Jacobi.
The book, which contains numerous illustrations, seeks to provide a clear explanation of Jung's complex theories for a wide non-specialist readership.
Jung wrote Part 1, "Approaching the Unconscious," of the book in English.
The last year of his life was devoted almost entirely to this book, and when he died in June 1961, his own section was complete (he finished it, in fact, only some 10 days before his final illness) and his colleagues' chapters had all been approved by him in draft. . . . The chapter that bears his name is his work and (apart from some fairly extensive editing to improve its intelligibility to the general reader) nobody else's.
It was written, incidentally, in English.
The remaining chapters were written by the various authors to Jung's direction and under his supervision.
John Freeman, editor, page viii of the Introduction, Dell Publishing, 1968"
"In spite of the fact that the Catholic Church admits the occurrence of somina a Deo missa (dreams sent by God), most of its thinkers make no serious attempt to understand dreams.
I doubt whether there is a Protestant treatise or doctrine that would stoop so low as to admit the possibility that the vox Dei might be perceived in a dream.
But if a theologian really believes in God, by what authority does he suggest that God is unable to speak through dreams?
I have spent more than half a century in investigating natural symbols, and I have come to the conclusion that
dreams and their symbols are not stupid and meaningless.
On the contrary, dreams provide the most interesting information for those who take the trouble to understand their symbols.
The results, it is true, have little to do with such worldly concerns as buying and selling.
But the meaning of life is not exhaustively explained by one's business life, nor is the deep desire of the human heart answered by a bank account. 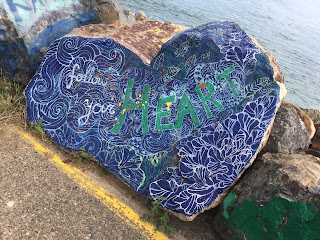 In a period of human history when all available energy is spent in the investigation of nature, very little attention is paid to the essence of man, which is his psyche, although many researches are made into conscious functions.
But the really complex and unfamiliar part of the mind, from which symbols are produced, is still virtually unexplored.
It seems almost incredible that though we receive signals from it every night, deciphering these communications seems too tedious for any but a very few people to be bothered with it.
Man's greatest instrument, his psyche, is little thought of, and it is often directly mistrusted and despised.
"It's only psychological" too often means: It is nothing.
Where, exactly, does this immense prejudice come from?
We have obviously been so busy with the question of what we think that we entirely forget to ask what the unconscious psyche thinks about us.
The ideas of Sigmund Freud confirmed for most people the existing contempt for the psyche.
Before him it had been merely overlooked and neglected; it has now become a dump for moral refuse.
This modern standpoint is surely one-sided and unjust.
It does not even accord with the known facts.
Our actual knowledge of the unconscious shows that it is a natural phenomenon and that, like Nature herself, it is at least neutral.
It contains all aspects of human nature - light and dark, beautiful and ugly, good and evil, profound and silly.
The study of individual, as well as collective, symbolism is an enormous task, and one that has not yet been mastered.
But a beginning has been made at last.
The early results are encouraging and they seem to indicate an answer to many so far unanswered questions of present day mankind."
Carl Jung from 'Man and His Symbols'.
Posted by Brizdaz (Darren) at 6/04/2016 09:25:00 PM