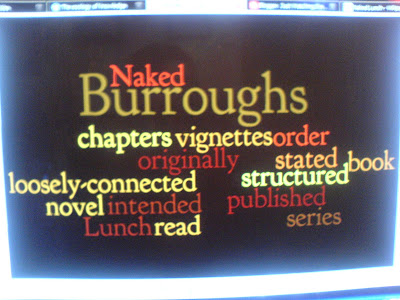 I'm slogging my way through William S Borroughs' Naked Lunch at the moment, because it was on a list of books that I came across synchronisticly and have been working my way slowly through.
It's one of those books I have to push myself to read, to see what all the fuss was about.
While reading most of the book is like swimming through a toilet, occasionally I find something that doesn't deserve to be flushed, but all in all I would have to recommend pulling the chain on the book as a whole.
When I was trying to find out about Burroughs on the net I came across this You Tube of him talking about "Cut-ups", and the subject intrigued me.
So then I Google-ed "Cut-Ups" and came across this website;
The Ecology of Knowledge

Wordle
"Wordle is a toy for generating “word clouds” from text that you provide.
The clouds give greater prominence to words that appear more frequently in the source text.
You can tweak your clouds with different fonts, layouts, and color schemes.
The images you create with Wordle are yours to use however you like.
You can print them out, or save them to the Wordle gallery to share with your friends."
I thought I would have a go and see what happens, so I typed this paragraph in;
"Naked Lunch is a novel by Burroughs originally published in 1959.
The book is structured as a series of loosely-connected vignettes.
Burroughs stated that the chapters are intended to be read in any order."
and got this little "Cut-Up", and variations of it. 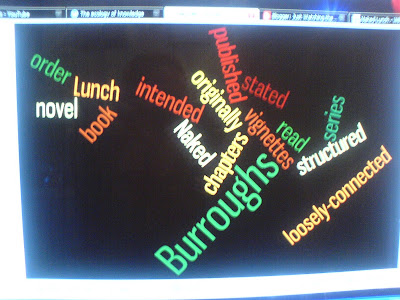 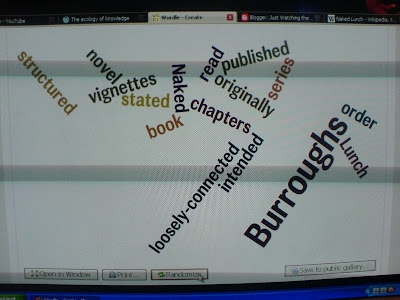 Then I entered the following information from Wikipedia on
Naked Lunch in popular culture
* The British science fiction magazine Interzone takes its name from the novel.
* The band Steely Dan takes its name from a dildo featured in the book.
Alt-country band Clem Snide is named for a character in Naked Lunch, who reappears in other works by Burroughs.
* The band Showbread titled one of their songs "Naked Lunch" in their 2006 release Age of Reptiles.
* In the 1984 Alex Cox film, Repo Man, there is a hospital scene in which Dr. Benway and Mr. Lee are paged. The two are also paged in a hospital scene in the 1998 film Dark City.
* The instrumental post-rock band Tortoise included a song entitled "Benway" on their 2001 album Standards.
* The post-punk band Joy Division's debut album Unknown Pleasures featured a song called "Interzone."
* In 2006, the British electronic band Klaxons released a track called "Atlantis to Interzone."
and got this; 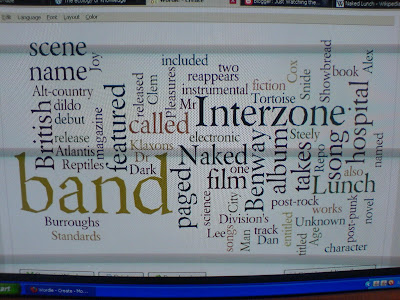 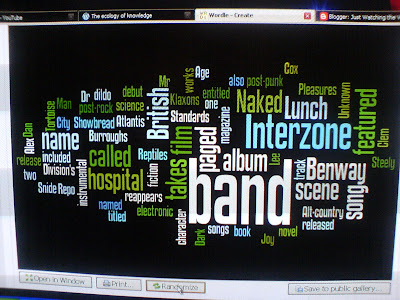