Manning and Malthouse and The Dead End (Drive-in) 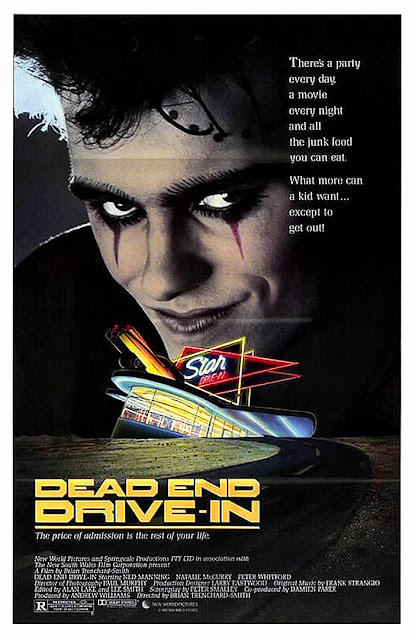 The first talk I attended at the Byron Bay Writers Festival was called, "Creating Words for Physical Space"and it involved
Brendan Cowell, Joanna Murray-Smith, Louis Nowra, and
Ned Manning as the chairperson.
I went mainly to see Brendan Cowell, because I had seen him in Beneath Hill 60 on a DVD I rented during the week before the BBWF.
Creating Words for Physical Space was more interesting than I thought it would be, and I was quite impressed with the chairman, Ned Manning.
I had never heard of Ned before, but he was in a little Aussie movie in the eighties called Dead End Drive-in.
Dead End Drive-In is a 1986 Australian New Wave film about a teenage couple trapped in a drive-in theatre which is really a concentration camp for societal rejects.
The inmates, many of whom sport punk fashion, are fed a steady diet of junk food, New Wave music, and movies.
Running time 88 minutes!?
Here's part one to get you started (below);
The other parts you should be able to get on You Tube also.

Now here come the synchronicities.
When I saw Ned Manning all I could think was how much he reminds me of Mick Malthouse, the coach of the
Collingwood Magpies AFL football team.
Now, if you click on part 1 of the You Tube of Dead End Drive-in, you'll see a young Ned Manning jogging through the streets in a very similar track suit as to what Mick Malthouse is wearing  in the photo above.
Same colours, anyway.
Black and White.
Now Mick Malthouse's team just lost the AFL grand-final today to the Geelong Cats 18.11 (119) to 12.9 (81) (119 is 911 backwards ... and 18.11 is 1+ 8.11 or 9.11;-) and he has run into a dead end at Collingwood, with today marking his last game as the Collingwood coach.
When I looked up Ned Manning's Wikipedia page I found out;
"Manning re-married to theatre director Marion Potts, with whom he had two children. In 2010, they relocated from Sydney to Melbourne when she was appointed director of the Malthouse Theatre."
Also me being a Brisbane Lions supporter, this line synced with me as well;
"Last One Standing" was performed at Sydney theatre the Old Fitzroy in 2007.
Manning played lead character Joe in the Old Fitzroy production."
The Brisbane Lions is a uniting of two older AFL teams.
The Brisbane Bears and Fitzroy Lions ... or old Fitzroy.

In the last 21 years of AFL grand-finals that Collingwood has come out the loser it has always been to a team bearing a cat as their mascot. 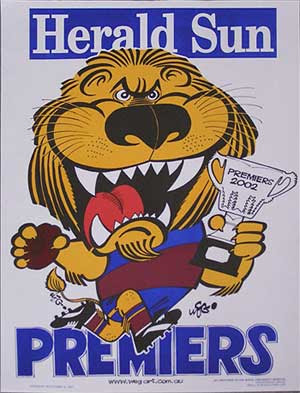 Also Manning's first wife was Bronwyn Bancroft, an
Indigenous Australian artist and that will be a synchronicity that will be discussed further in my next post.
Manning's character in Dead End Drive-in is billed in the movie  by the name Crabs, and it was written by Peter Carey who attended Geelong Grammar School, Geelong, Victoria, Australia.
The Geelong Cats being the winning team in this years AFL grand-final.

Update: 02.10.11
I have just finished watching Dead End Drive-in on You Tube and just as I thought I couldn't squeeze another sycnro out of this post, I noticed as the credits were rolling that an actress by the name of
Lyn Collingwood played a character called Fay in the movie.
She's the waitress taking orders behind the counter in the
"Ezy Eatin" diner in the drive-in.
Australian (and British) viewers of Home and Away (I'm not one of them, by the way ... although my wife is) the TV show would know Lyn Collingwood as the character Colleen Smart.