The World (Wide Web) is a Circle

I was just surfing around a few of my favourite blogs and thought it was funny how certain themes play out all around the world at the same time in quite unrelated ways that add just that little touch to the bigger puzzle of life and ideas.
The song in that film clip above, The World Is A Circle, is from a movie, Lost Horizon I saw at the cinema with my Grandmother when I was a young boy.
I have always had a soft spot for that song and movie, although I can't remember seeing the film in it's entirety since that trip to the cinema.
I remember catching bits and pieces of it when it has screened on TV, but never the whole lot from start to finish.

I had meant to track down a copy of it on DVD so that I could watch it when I wanted to, but I had forgotten about it until yesterday, when I read a post about Pi at the Synchrosecrets blog,
A Slice of Pi
run by my friends Trish and Rob MacGregor.

The post was about the ratio of the circumference of any circle to its diameter ... or the number 3.14 as it is more commonly known, although it goes on for quite a bit past the 4.
The next blog after this was Mike Perry's blog 67 Not Out.
He had a post called,
Memories of Bambi

about his memories of the first trip to the cinema that he could recall and seeing the movie Bambi with his mum.

Bambi held no special memories for me, but Mike mentioned a line out of the movie he remembers before Bambi's mother dies, "Faster! Faster, Bambi! Don't look back! Keep running! Keep running!".
I was playing my Steve Winwood CD Revolutions, that I had purchased after seeing Steve play at my local winery a few weeks back,
Higher Love?
but had just taken it out and replaced it with an instrumental CD before I had gone over to read Mike's post.

The song that I was listening to before I decided to take the CD out was Keep on Running.
Mike mentions a cheeseboard his mother made with a scene from Bambi on it, where a little bird is sharing a message with the deer, which is funny, because in the post I wrote about me seeing Steve play at the winery, there is a bird message where the birds flying overhead made a V, then a Heart, then a guitar (which I captured on my phone ... see the photo on that post; Higher Love).

Then I went off to work and during the day found out from a work mate that Big Arthur (Artie) Beetson had passed away from a heart-attack at the age of 66 (same age as my father-in-law when he died of a heart-attack last year in October).
Artie was the coach of my favourite Rugby League team, the Cronulla Sharks (which I have been a life member of for the last 23 years) in the years 1992-93.
It just struck me tonight when I had written the post below about Arthur's passing and when I went back to Mike's blog 67 Not Out, that neither Arthur or my Father-in-law made it to 67.
Then it struck me again that the Sharks were admitted into the National Rugby League competition in 1967, hence the reason they put the number 67 on a lot of their supporter gear.
When I attended the Byron Bay Writers Festival I only took down my two Sharks polo shirts to wear.
One is sky blue, similar to the background colour this writing is on and with a big 67 on the sleeves, the other one is white with an LG (life's good) logo on it, because LG were our major sponsors the year that I bought that polo shirt.
And  who should be major sponsors at the
Steve Winwood/Steely Dan concert???
Apart from Sirromet which is the name of the winery it was staged at.
And what colour is the front part of the stage roof?
I believe that's the colour of my favourite Rugby League football team, and this is Bribane in this photo, not many Cronulla supporters up this way.
Cronulla is just south of Sydney, about 450 miles away from here.
A few coincidences flying around here ... and that's apart from the bird coincidences which were flying around also at the concert.
Anyway, back over at Mike's web tonight he had up a post called, 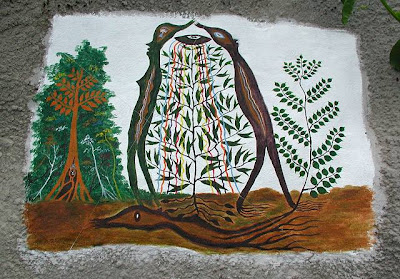 The Winds of The Shacapa at Eden
which was about Shacapa (or Chacapa) leaves, and the painting above from the Eden Project somewhere in Cornwall, near where Mike lives.
I had never heard of this project before reading about it tonight.

Then I decided to go take a peak at a blog by an artist named
Vanessa Valencia, a site I haven't visited for a while.
Her blog is called  A Fanciful Twist  and I did a post on her in May this year,
Vanessa Valencia is One Talented Artist, Living Through Her Wonderful Creativity

Vanessa is a very talented artist and I own quite a few of her prints,
which now hang on our walls.
The first thing I saw when I got to her blog was this picture below, 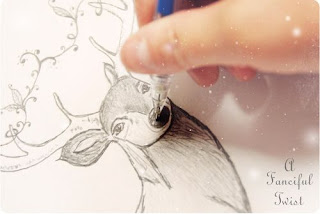 and the finished card here - 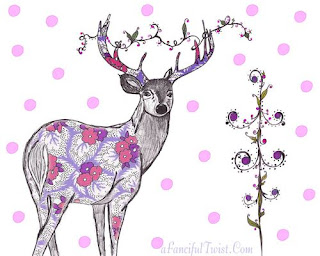 Then I think, do those leaves look like Shacapa leaves?
Then I went back and wrote a comment at Mike's post on the Shacapa leaves, then had the hunch to go see what Paulo Coelho was blogging about tonight.
Paulo had a post called, The Circle of Joy about a winemaker that knocks on a monks door to give him a bunch of grapes from his vineyard as a gift of gratitude.
You can read the story yourself by clicking on the link above, if you want to.
He had an image of a Yin/Yang with birds in the middle, deer down the bottom and grape leaves near the top.
The colours of this Yin/Yang are predominantly blue, black and white.
The Sharks colours.
I liked the Yin/Yang so much that I thought it should be the first photo of this post, as it sums up what I'm trying to convey here with this story - that all the bloggers mentioned here live in different parts of the globe.
Mike lives in England, Rob, Trish and Vanessa live in the United States, I live in Australia and Paulo lives in Brazil.
So for some of us it's night time, while for the rest it is day time.
For some of us it's the first day of Summer, and for others it's the first day of Winter.
Hot/Cold, etc, etc, etc.
It's the perfect symbol for us bloggers as a group,
and the differences and similarities that connect us. 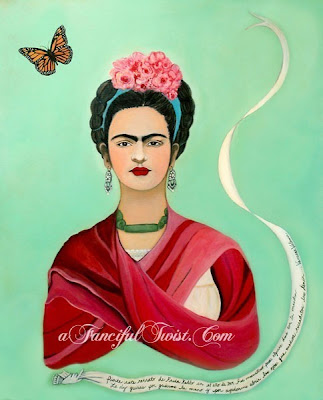 One more coincidence, this painting of Vanessa's called,
Frida Kahlo and the Butterfly seems to link a lot of things mentioned on this post as well.
Look at the photo of the A Day on the Green concert again.
Do you see that butterfly anywhere?
That painting could even be renamed,"Frida on the Green", considering the background of the picture that she is painted on; - )
And Kahlo isn't that far away from Coelho in pronunciation either.
And at the Byron Bay Writers Festival what person was represented in sculpture? 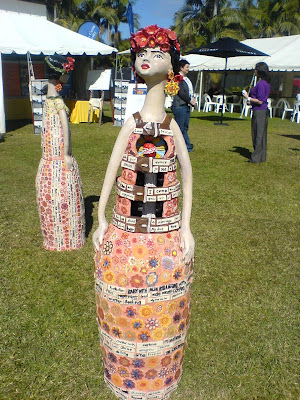 Oh and I finally got a copy of Cars 2 on DVD at grocery shopping last night ... not a place I buy DVDs from at all, but I made a promise to myself when I saw this movie at the cinema that I would grab a copy at the first opportunity I got when it was out on DVD.
That was the first time I had seen a copy of it available on DVD, so I grabbed it.
Blue Cars Too