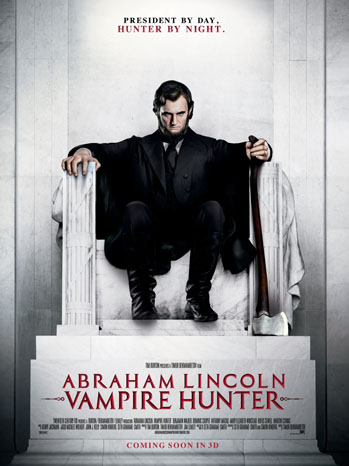 I went to see the movie The Grey again the other night, as it's cinema run is nearing the end and I wanted to take my boys to see it
(don't worry, they are 20 and 17 years old, not children, as some of you readers may have been thinking;- ).

Before The Grey started a trailer came on the screen for
Abraham Lincoln Vampire Hunter.
My first reaction was
"What crap is this that they are trying to serve up as entertainment?".
But then I saw Tim Burton's name was attached to it, so I thought there must be more than meets the eye here.
And maybe there is?
Abraham Lincoln's "Bank War"

It has been widely rumoured among...oh, how would I put it if I was a Bankster?...Oh,yeah...conspiracy theorists, that Wilkes Booth was just a paid assassin for the Bankers, who saw Lincoln as a thorn in their backside, anyway.
And probably not a theory without some justification, when you do a little history digging. The movie is based on a book (above) by Seth Grahame-Smith, who also wrote...or mashed up, might be a better word...
Pride and Prejudice and Zombies.
I thought it was interesting that Rufus Sewell also stars in the movie as Adam.
Perhaps his most famous acting role was playing John Murdoch in Dark City, but take a look at all of the other interesting roles in his acting portfolio;
*Tom Builder inPillars of the Earth - Set against a backdrop of war, religious strife and power struggles which tears lives and families apart. .
* Seth Starkadder in Cold Comfort Farm.
*Ross in At Sachem Farm - Ross, a self-absorbed and determined young man, plans to sell off his family's priceless wine collection to finance his purchase of a substantial mining interest which promises to make him rich.
However, standing in his way is his eccentric Uncle Cullen, who has much different and much more bizarre plans for the family estate.
*Eric Stark in Bless the Child -  Omens and concepts of good vs. evil have no place in Maggie O'Connor's well-ordered, practical universe.
Her life revolves around her job as a nurse at a busy New York hospital, until one rainy night, her sister Jenna abandons her newborn, autistic daughter at her home.
Maggie takes the baby in, and she becomes the daughter she never had.
Six years later Jenna suddenly re-appears with a mysterious new husband, Eric, and abducts Cody.
Despite the fact that Maggie has no legal rights to Cody, FBI agent John Travis, an expert in ritual homicide and occult-related crime, takes up her cause when he realizes that Cody shares the same birth date as several other recently missing children.
The little girl, it soon becomes clear, is more than simply "special."
She manifests extraordinary powers that the forces of evil have waited centuries to control, and her abduction sparks a clash between the soldiers of good and evil that can only be resolved, in the end, by the strength of one small child and the love she inspires in those she touches.
*Count Adhemar in A Knight's Tale - After his master dies, a peasant squire, fueled by his desire for food and glory, creates a new identity for himself as a knight.
*Ian in Extreme Ops - While filming a advertisement, some extreme sports enthusiasts unwittingly stop a group of terrorists.
The catchphrase for the film is "Fear is a Trigger".
*Plus many other roles worth looking into. 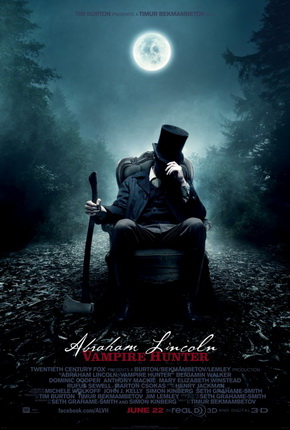 Vampires / Banksters / Parasites...whatever his fighting in this movie.
It looks like it will be one worth seeing on whatever level you want to view it, I guess.
But I'll be viewing it from the perspective of the last paragraph from this website entry;
Abraham Lincoln's "Bank War"

"The present, chaotic tyranny of unregulated international banking creates, in Lincoln's words, a "great volcano at Washington, aroused and directed by the evil spirit that reigns there, belching forth the lava of political corruption."
Have we the courage, and can we revive the cultural and political heritage of Lincoln's day, to restore freedom to our country?"
In that spirit, how can you not cheer him on?
Now what's that coming out across the water?
A Bankster?-)