The Cosmic Egg and the Dragon 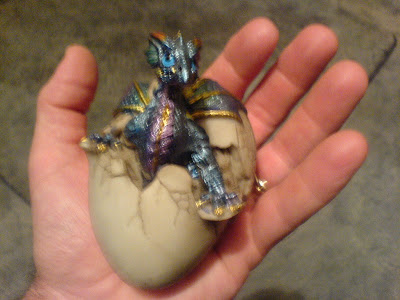 I bought this statue of a dragon bursting out of what I saw as a cosmic egg at the Crystal Castle in the Byron Bay hinterland last year, as I thought it was a good representation of the year that was approaching 2012: The Year of the Dragon.
I guess it reminded me of Wolfmother's album Cosmic Egg, which I was fond of at the time. 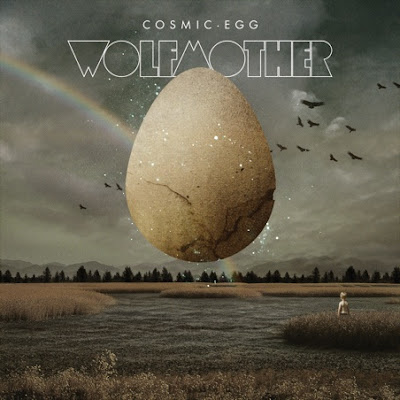 Looking at the above album cover reminded me of the drive from Byron Bay to Mullumbimby (the crystal castle) where I saw the first double rainbow that I ever recall seeing in my life.
I tried to take a picture of it, but I could never get a good enough view from the car as we were driving and the conditions made it too dangerous to pull over to the side of the busy winding road.
By the time I could get a clear shot the rainbow had disappeared.
I had never heard Wolfmother play live before, so I was pleased when I heard earlier in the year that they would be playing River-stage in Brisbane on March 24th, 2012, supporting
The Cranberries and Lenny Kravitz. (March 24th just happens to be my brother's birthday, as well. That's his hand on the wheel in the photo above.).
March 24th also fell pretty much on the New Moon, which was a bit of a coincidence, as my favourite song on the album is
New Moon Rising, which was one of their opening songs on the night.
Now, here's where the cosmic egg of synchronicity cracks wide open in my world.
The next day I was going to write up my night out at the
Lenny Kravitz, Cranberries, Wolfmother concert on this blog...but first I popped in to have a read at Mike Perry's blog and found this post that he had just put up that day;
Attracting Birds Coincidence,
which helped me to chose one of about ten books I had on my desk to start reading, as I had asked for a guiding sync from the universe to help me decide which one would be the right one to start reading. 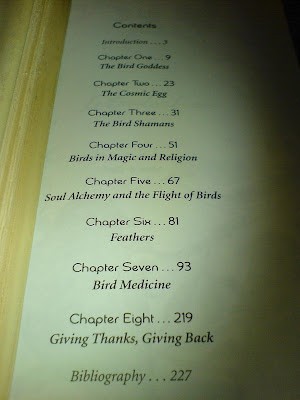 I had just finished reading Daniel Pinchbeck's book
2012:The Return of Quetzalcoatl, which had as one of it's main themes, the adoption of a lunar calendar to replace the current solar based calendar.
New Moon Rising? 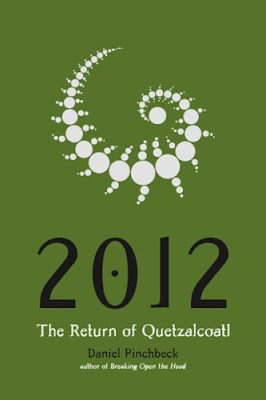 Pinchbeck also wrote an earlier book called
Breaking Open the Head, which I found quite interesting, too.
And if you look at the two pictures above of the
Cosmic Egg you might notice it looks a bit like the top of the skull viewed from above?
Breaking open the head?

The title of the album comes from a position in yoga described by frontman Andrew Stockdale as "like the fetal pose". 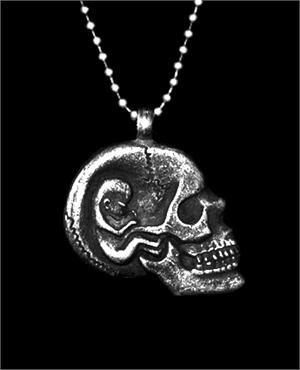 I have only recently received a Skull/Fetus necklace from Alex Grey's New York shop in the mail...not that I  will wear it, I just like admiring it as a work of art.
It reminds me of Kubrick's Starchild from 2001. 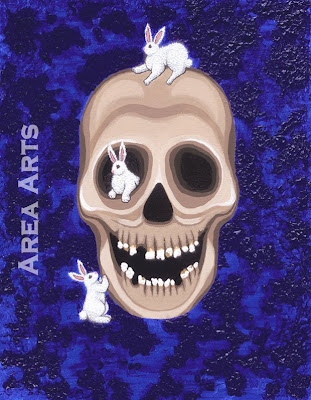 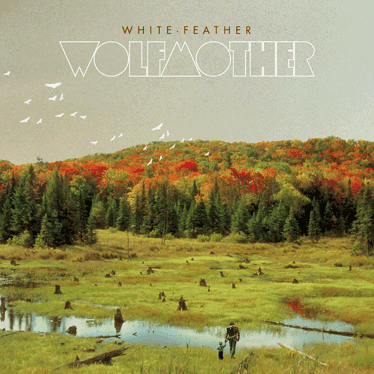 Now, time for some sync weaving.
As I said, I chose to read the book The Healing Wisdom of Birds by Lesley Morrison because of Mike's bird post.
The second chapter in this book starts on page 23 (my birth-date) and is titled The Cosmic Egg!?!
But get this, Mike...chapter 5 starts on page 67 and is titled,
Soul Alchemy and the Flight of Birds.
Mike's main blog is titled 67 Not Out, by the way.
Also, Andrew Stockdale, the lead singer of Wolfmother was born on 20 July, 1976.
Mike also wrote about the numbers 67 and 76 in this post,
The Coincidence Of Numbers
Where he says, "so 67 and 76 referrals when the name Perry is mentioned - coincidence?
Or is there something more meaningful about numbers and how they appear in our lives?"

Wolfmother also have a song on Cosmic Egg titled White Feather, which I always thought was called, Dancing Feet, because those seem to be the main words in the song, but it turns out it is called White Feather, something which Mike writes a lot about on his blogs.
White Feathers Comfort The Bereaved
If you can't understand the words Andrew is singing, here are the lyrics to
White Feather
You wanted love, you wanted love but its not what she was thinking of.
You step to the left, you step to the the left on your dancing feet, now.
Dancing feet, I cant compete now with with your dancing feet.

Dancing feet, I compete now with your dancing feet now.
Some people say, they cant compare, when your not over here your there.
You see coz girl, she say oh no, another boy would you like to know

Somebody gotta try and to get to know now,
Somebody gottsa try and say its all right now, that its all right now.
The first new original material, since the release of
Pleased to Meet You in 2007, appeared during the band's first performance in nine months at the Queensland Gallery of Modern Art (QGMA) on 12 April 2008 in the form of four new songs: Back Round, The Violence of the Sun, Monolith and Inside the Mountain.
With increasing discussion of Wolfmother's second album, rumours began to emerge in August 2008 that the band was due to split up.

On Saturday night I had parked my car virtually under the
Queensland Gallery of Modern Art and walked to Riverstage from there.
It took nine months for them to release new material
(some which would appear on Cosmic Egg),nine months being the gestation of a fetus and they birthed a song called
Monolith (2001:A Space Odyssey?) Skull/Fetus?

My very first post on this blog,
BRISBANE (Sign Outside of the Gallery of Mordern Art,Southbank [the BEST ] side of the River),
was about a sign outside the Queensland Gallery of Modern Art, which I was going to use as my blog avatar, but you couldn't make out what it was when it was icon size, so I didn't use it.

Since I bought the dragon coming out of the Cosmic Egg at the Crystal Castle, I thought it was funny that there was also a song called In The Castle on Cosmic Egg, as well.
After a number of rumours regarding new members, Wolfmother re-appeared in February 2009, performing under the alias
White Feather with new musicians accompanying Stockdale.
A new song called Pilgrim was mentioned.
Other songs debuted at the two low-key comeback performances included
White Feather, Phoenix, Far Away and 10,000 Ft., complemented by the previously performed Back Round and The Violence of the Sun.
Transmissions From The COSMIC EGG - Episode , revealed to be,
"The first of a series of behind-the-scenes looks at the forthcoming Wolfmother opus" in which "Episode 1 travels the open high-way to Byron Bay where much of the record was born and pre-production took place". 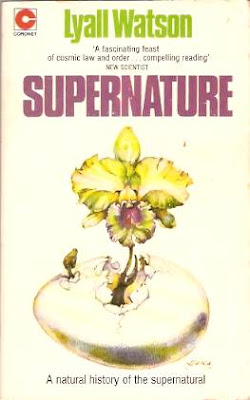 I also just recently purchased a secondhand edition of Lyall Watson's book Supernature after reading about him and the book in
The Holographic Universe.
I did a post about the book here,
Supernature Syncs
On the front cover is an orchid bursting out of an egg (Cosmic Egg?) with the catchphrase,
"An unprecedented look at strange phenomena and their place in nature."
(my cover is a slightly different one to the one pictured above, which doesn't carry that catchphrase) 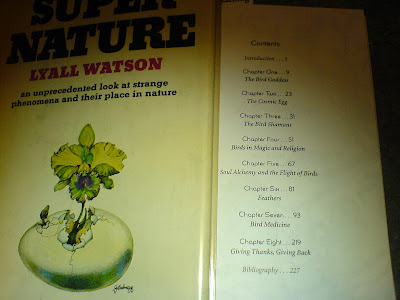 And on the back cover says, "...living things are involved in an open dialogue with the universe,a free exchange of information and influence that unites all life into one vast organism that is itself part of an even larger dynamic structure."
Just to hit home Mike's Mother/Bird visitation theme,
The Cranberries were the next band on stage after Wolfmother and they played most of their big hits like Zombie, Linger and
Ode to My Family.
Page 76 of The Healing Wisdom of Birds mentions a pelican meditation where the pelican 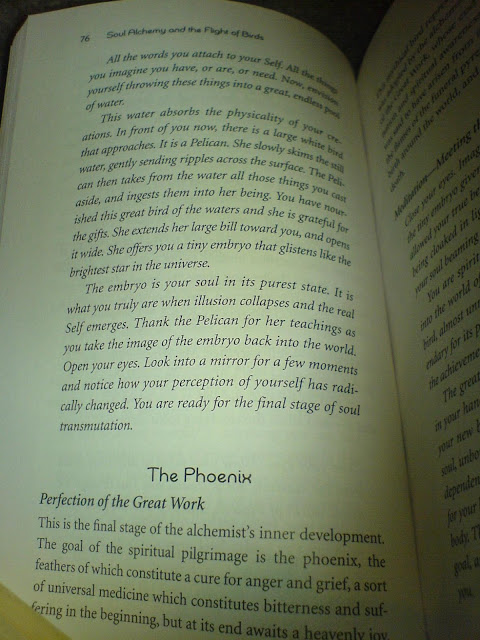 "offers you a tiny embryo that glistens like the brightest star in the universe.
The embryo is your soul in it's purest state.
It is what you truly are when illusion collapses and the real Self emerges."
Page 76 also mentions the phoenix,
"The goal of the spiritual pilgrimage is the phoenix, the feathers of which constitute a cure for anger and grief, a sort of universal medicine which constitutes bitterness and suffering in the beginning, but at it's end awaits a heavenly joy.
The mythical bird represents immortality and rebirth, and was adopted by the alchemists as a symbol of the final stage of the Great Work, whose end resulted in complete illumination and spiritual awareness.
In mythology, the phoenix was said to have arisen from it's own ashes after burning in the flames of the funeral pyre.
This is the classic symbol of rebirth around the world, and of coming forth renewed after death."
Regarding, "The goal of the spiritual pilgrimage is the phoenix."
There are also songs on the Cosmic Egg album titled Phoenix and Pilgrim.

I like the expression: 'sync weaving' that sort of sums it up. And as for "But get this Mike...chapter 5 starts on page 67 and is titled,
"Soul Alchemy and the Flight of Birds", that's quite an impressive weave.