For those of you out there wondering what Bluesfest is like, I found somebody who has posted four You Tube videos of a summery of Bluesfest 2012, as they saw it ... and some of how I saw it ... even though recording of Bluesfest is prohibited as a condition of entry on the ticket.
All I've got to say to the person who broke this condition laid out by the organizers is ... thanks mate, because I was wondering what some of these other acts were like.
I was at some of these gigs, but a lot of them I missed because I only had tickets for Good Friday and Easter Monday.
Whilst it is nothing like being there to witness it in person, it will give you some idea of the atmosphere of Bluesfest.
Out of all the performers in these clips, I was there at Steve Earl's show (the person filming must have been quite close to my location).
I wish I had of been at Seasick Steve's show, but I wasn't
(maybe next year?).
I was at Ashleigh Mannix's show, way over on the left-hand side of the tent.
And in the John Fogerty section of the clip I was in front of the right-hand side-screen, with nobody between me and the band, but a security guard.
That is probably me you can hear singing with what sounds like the dying cat's voice;-)
I was way outside the tent, sitting on the grass (not smoking it;-) during the Zappa plays Zappa set, and same again when YES took to the stage.
I was sipping on a wonderful chai tea drink and eating a
New York style pizza that I was glad my son suggested I should try.
I'll be back next year for the food, just as much as I will be for the music.
And if it's one thing I learned from it all, it's that if you have a doughnut stand you will make a killing in sales
when the weed smokers get the munchies.
The line up for  doughnuts was insane, later on in the night, and whilst I was one of those in the line up, it was only from the effects of all the passive smoking I had done on the night. 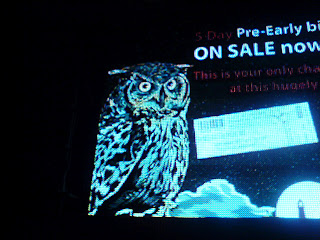