I was over at the Synchrosecrets.com blog-site checking out the latest post this morning which was a post about wine syncs where Rob wrote-
"An e-mail Sunday night from a friend mentioned a synchro about wine.
That startled me because a few hours earlier I had also experienced a meaningful coincidence related to wine.
My friend, Kevin, wrote:
“Weird synchro last night. I popped a movie in the DVD player.
Went to the kitchen to pour a glass of wine and my wife was opening a bottle, a Carmenere from Chile.
It had a reference to the grape being from the Jurassic period on the label.
Guess what movie I put in just before that?
Uh huh, Jurassic Park. Pretty weird.
This a bottle we’ve been saving for some time so neither of us remembered the Jurassic reference.
No idea what it is supposed to mean.”
I wrote back, “Wow! I had a wine synchro today. I was watching the Dolphin-Ravens game, and when Trish came home from the grocery story the score was tied 6-6.
I walked into the kitchen and saw that she had bought a bottle of cab labeled, Ravens.
I knew right then that the Dolphins were going to lose.
Sure enough.
Final score: Ravens 26, Dolphins 23.
Trish has no interest in football and had no idea the Dolphins were playing the Ravens.”
I wouldn’t have written a post about a wine synchro if it had only been my story or only Kevin’s.
But when we both had wine synchros, well, that’s a double synchro.
I guess somehow he and I are on the same wave length."
Wine Synchros I left this comment after reading the post -
"Seeing Megan’s painting was a bit of a sync for me, as my artist friend Starr just sent out a Facebook feed of her new 30 paintings, most of which are of our favourite Brisbane bridge, which she gave me permission to use on my blog for posts about that bridge.
But she also paints a lot of pictures of wine and wine glasses as well.
There are a few wine paintings among her new ones, but she seems to have a thing for Paris now in her paintings since she has been holidaying over there."
Kaleidoscope After posting that comment I went back to reading the book I had just started reading called Shock Waves, a book about the Bali bombings that happened nearly 11 years ago on the 12th of October.
I bought the book at the Byron Bay Writer's Festival this year after meeting the author, Hanabeth Luke, and I wanted to get it read by the 12th October. 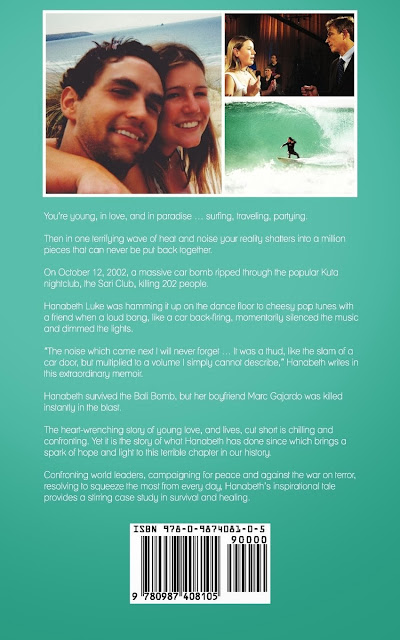 “Lilac Wine started to play through the speakers,
’Oh! I love that song!’
I said smiling to Marc.
‘It’s my favourite he replied excitedly, smiling back at me.”

Marc was Hanabeth's boyfriend, who was killed instantly in the bomb blast 11 years ago, and this was a recalling of their first romantic exchange.
I wrote about meeting her that day at the BBWF here -
Unknown Things?
There are some photos of Hanabeth next to Steve Bisley on stage at the BBWF

The weird thing also is that Hanabeth has spent her life living between Mike Perry’s Cornwall and my part of the world, Byron Bay/Brisbane, as her parents were surfers chasing the endless summer.

Looking at Megan’s painting it looks like surf’s up in the wine glass, which is appropriate as Hanabeth Luke is a mad keen surfer.
I also found a Miley Cyrus version of ‘Lilac Wine’ which I have to grudgingly admit is quite good.

And Mike Perry might find this stat interesting,there are 767 likes for Miley’s version at the You Tube site, so far.

So, with Rob's football score of Ravens 26, Dolphins 23.
I thought it was synchy that the lilac wine reference in the book was on page 26 and Miley's new song has 23s all through her new film clip. 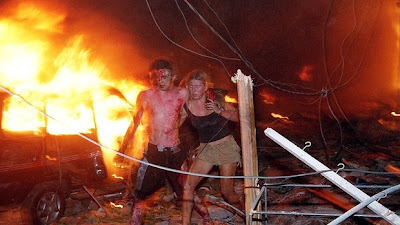 On the cover of the book is a photo that was used in papers all round the world of Hanabeth rescuing a 17 year old boy, who had burns to 70% of his body.
Music stops amid ribbons of fire
His mother’s name is Megan, but sadly Tom ended up dying from a stroke a few weeks later.
Also Hanabeth and friends held a memorial surf for Marc at Dolphins Beach, Byron Bay and they could hear whale-song when they stuck their heads underwater.
And when they got out of the water, one lone dolphin was seen frolicking in and out of the water where they had just held the ceremony. 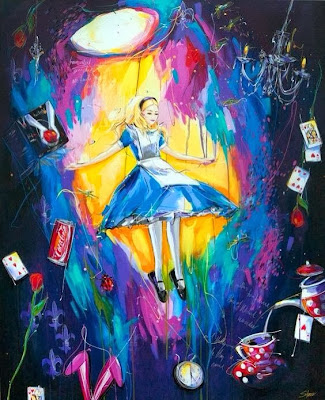 And looking at Starr's painting of Alice falling, Hanabeth made references to having a dream where she was falling from a building and hitting the ground hard, which she did 3 days later, getting out of the burning nightclub.
She also said when she met Marc that she thought he was drinking Coke but it turned out he was drinking Coke mixed with Jack Daniels whisky and she often makes references to falling cards and teapots.

Now where did I see the name Jack Daniels recently?-)
Being John Lennon and Synchronicity
After all of that syncing I think I need a drink.

UPDATE: 10 October, 2013
You can see an interview that aired on a national Australian network where Hanabeth talks about the Bali bombing and their prophetic dreams a few days before it happened in real life at this link -
Saved For Good
Posted by Brizdaz (Darren) at 10/09/2013 12:03:00 AM

I saw the surf in Megan's painting too - very much a Cornish activity. Lots of surfing here in the summer, especially at places like Newquay.

(Still can't watch the videos as broadband too slow - British Telecom say they will have to dig up the road to find what is causing the problem!)

I think you would find this book an interesting read Mike.I'm only half way through,but the book is is set between Cornwall,Bali and Byron Bay,where Hanabeth has spent most of her life traveling between.There are some very psychic dreams and visitations mentioned in this book and for me personally having met Hanabeth,talked to her and looked into her eyes almost like on a soul to soul level,the book takes on a tone to me of a friend telling a very personal life changing story.
As I have said before elsewhere,I would have had no interest in reading about the Bali bombing if I had not have had to sit through Hanabeth's story while listening to Steve Bisley.It's a bit like the Byron bay Writer's Festival version of a library angel throwing a book at your feet to make sure you pick it up and read it.Life is strange.

@Mike
Another thing I learned while reading "Shock Waves" was that Hanabeth's birthday is one day after my son Sean's.Sean is the son mentioned in my post "Unknown Things" who traveled to Bali this year visiting the bombing site and bringing me the Balinese mask home which hangs on my wall.His birthday is July 5th and from what Hanabeth writes in the book I figure out her birthday is July 6th.

Thanks for putting up Megan's painting! This is an intriguing series of synchros. The books sounds like a must read. Onto my list it goes. Mike, hope your internet gets fixed!

Thanks for the recommendation Darren. I remember you mentioning the Balinese mask. A friend of mine went to Bali recently - quite a trek from here.