When I was down at The Byron Bay Writers Festival this year
My Crow Totem at the BBWF
I found Dave Graney's book 1001 Australian Nights in the bookshop.
The thing that caught my eye was the car on the front cover,
which to me looked (and still looks to me) pale blue with silver wheels.
If you have been following this blog then you know what the blue car with silver wheels mean to me as a sync sign.

When I picked Dave's book up and had a flick through it I felt that I should buy it, so I did, even though I didn't really know much at all about Dave Graney's music.
But with the help of You Tube I soon learned about his songs and bands.
I wasn't even planning to go to Dave's talk at the festival.
I was going to see a talk by some other authors at that time of the day, but after purchasing his book I decided to go see his talk with Justin Heazlewood (The Bedroom Philosopher) and Lucky Oceans.

I didn't even know much about The Bedroom Philosopher's music, either.
I went along to the talk and even picked up Justin's book, as well.
It was a good talk and I'm glad fate guided me to a talk I never would have attended if it wasn't for the car on the front of Dave's book.
You can see Justin doing a pole dance on the tent pole of the tent that the talk was held in, in the above You Tube.
In the passage above in Dave's book he mentions playing
the Martians Cafe in Dean's Marsh.
"Martians Cafe has become a very popular music venue amongst punters and musicians alike. Artists such as Archie Roach, Chris Wilson, Dan Sultan and Rebecca Barnard have honoured our stage and have received wonderful receptions from our audiences."
Peter Carey, who was also at the Byron Bay Writers Festival, prides himself when people ask him what he is
(referring to nationality, or place),
he replies a Martian, because he is from a town called
Bacchus Marsh. 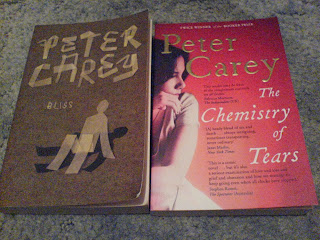 I use the moniker "Australien" on my email addresses, as I'm an Australian, and not very good at spelling;-)
One day I spelled Australian wrong, but liked it so much that I designed a t-shirt with that name in mind. 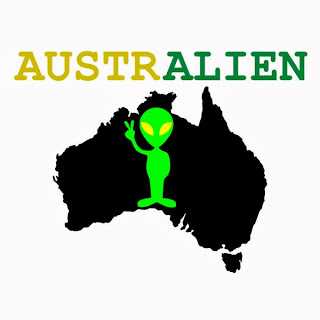 When I bought a copy of Bliss at the BBWF and asked Peter to sign it, I asked him to sign it to Darren the "Australien". 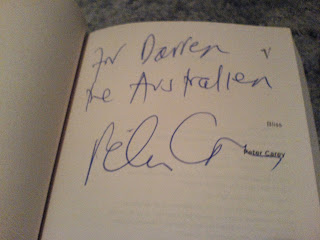 He seemed pretty impressed with that play on words, like he had never even seen anything like it.
Come to think of it, neither had I until the day I misspelled Australian.
Now, the funny thing is last year Alan Green e-mailed me and asked me if I wanted to contribute my "2012 End of the World" predictions for The SYNC Book 2. 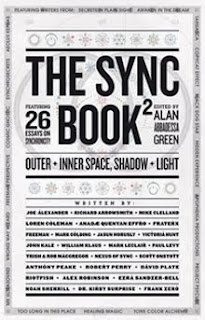 I wrote about one of my favourite movies Bliss

(based on Peter Carey's novel of the same name)
and the main character's wondering if he had died and gone to hell when he suffered a heart attack, or whether the world was always this screwed and he wasn't really paying attention.
There was no way I could have foreseen Peter Carey being at the 2013 Byron Bay Writers Festival the year before, as there was no mention about him coming out to Australia for this event.
He lives in New York and hasn't been to Byron bay for 2 to 3 decades.
Another thing I didn't realize when I saw the movie, but found out when I read the book is that the place Harry Joy heads to is the area surrounding Byron bay, near Mt.Warning/Wollumbin.
Mount Warning
The area Peter Carey has Harry Joy do all of his tree planting later in the book Bliss is the area focused on in this book -
Also, both Justin and Dave mention the town of Goondiwindi in both of their books, which is a personal sync for me also, as I just wrote a post a while back about the town and the race horse.
I've had heaps of syncs reading Dave's and Justin's books, but that will be enough for this post.

Maybe the best thing that has come out of the books was discovering their back catalogue of songs on the You Tube channels.
http://musictonic.com/music/Graney,+Dave+_+the+Coral+Snakes#v=VuU9smHwtJU
http://www.bedroomphilosopher.com/media/videos/
Posted by Brizdaz (Darren) at 10/29/2013 04:34:00 PM