The "Bird of Paradise" "Coincidence"

I've been listening to Barry Eaton's Weekly Radio show on the internet every week since meeting him in person at the
Byron Bay Writers Festival.
Some weeks it's good and some weeks it's just OK, but that's only because of the guests he is conversing with on a particular week, and that's only my own personal opinion, because of my own interests in what his guests have to say.
This week he had Valerie Barrow on his show
RadioOutThere,
not that I had ever heard of her before, but I did find this interview particularly interesting on a conscious and subconscious level.
After listening to this interview I went over to Synchrosecrets.com to see what the latest post was.
It was called "UFO video".
I saw Mike Perry had left a comment, so I decided to go over to his site and see what was going on over there.
The Palheiros and Sights of Madeira
He had a lot of beautiful holiday snaps from his trip to Spain.
One was of a flower that obviously impressed him, a plant
(Bird of paradise) that I have growing just outside my window, about three feet away from where I'm writing this post.
I love these plants and have taken these plants from house to house with me as I  have moved into newer houses.
My Bird of Paradise is coming to the end of its flowering run.
But a few weeks ago it looked just like the one in Spain does.
They are beautiful plants indeed.
I left a comment on Mike's post about the coincidence of that plant growing just outside my window, then hit the hay for the night.
The next morning I got up logged into my blog and saw Starr
(one of the interesting people who's blog I follow)
had  a new post about her Toowoomba Art Show and in that post she wrote about the wonderful new cocktail she had discovered up there called "Bird of Paradise"!?!
Now I had three "Bird of Paradise" coincidences.
So I returned to Mike's site and saw that the picture was taken in Santana, so I keyed 'Bird of Paradise' + Santana into Google and found an artist by the name of Larry Santana
who had painted a picture called 'The Spirit of the Bird of Paradise'.
I thought it was strange that in the radio interview about the Aboriginal  legend of the star people from the Pleiades's and Sirius and the painting by Larry Santana and my Blue Acturian statue I bought from Cynthia, the skin colour is always a dark pale blue.
There seems to be a blue skinned alien theme running through these "coincidences".
Larry even has a painting titled Kingfisher, which looks more human in features than bird like.
Starr said I could use her painting of the bird of paradise from her Facebook site.
I didn't even know she had a painting of a bird of paradise, but unfortunately I don't have a Facebook account and don't want one, so I can't access it.
I tried to see if I could get an image of it by Google-ing Starr+
Bird of Paradise, but I got an artist named
Linda Starr who had a bird of paradise clay wall hanging instead.
Then when I clicked on Linda Starr's most recent post I found this photo and comment;

"This is an un-retouched photo of a mocking bird outside my studio window teasing my cat. We have reflective film on our windows and the birds think they see a rival in the window.
The bird kept flitting here and there up and down the window and I kept trying to capture it still so it would be in focus and then, strangely, this is the photo I liked the best.
I love the mystical quality of this photograph as if from a dream"

The funny thing also is that Larry must have sold his painting of
'The Spirit of the Bird of Paradise', because the day after I had copied the image to file, he had taken it off his site.
So it is no longer there.
Lucky I took that window of opportunity to copy an image, or I would have nothing to show of his painting.
Also on Linda Starr's post she had this photo of a white bird of paradise  (white feather???) (I've never heard of these before) because she said it was white rabbit day.
How far does this rabbit hole go?!! 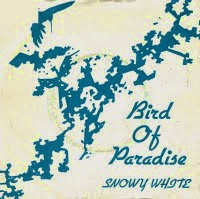 One more strange thing to end this post on is I also found this song,
Bird of Paradise sung by Snowy White. 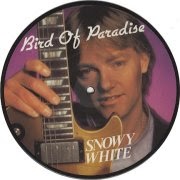