Our Lady of Victories Sync

I was just reading a post over at Mike Perry's blog 67 Not Out about his trip to Ibiza
Santa Eulalia Church and The Roman Bridge
and the Santa Eulalia church on the hill that he was drawn to take some photos of.
It reminded me of my infatuation with a church
in my hometown called Our Lady of Victories.
Now, I'm not a Roman Catholic, so it wasn't a religious thing, even though I do feel very spiritual around a lot of old Catholic buildings, icons, artworks and tools of the trade, I run the other way just as fast when it comes to the dogma.
Probably why I joined the Liberal Catholic Church in my early 20's, because I love the spirituality of Roman Catholicism, but just can't handle that dogma.
Spiritually Blue
Anyway, Our Lady of Victories has always had a very sacred place in my heart, and I don't really know why.
It's just one of those things more of the heart than the head.
I found this information about the church at a great blog called
Your Brisbane: Past and Present

"Our Lady of Victories church in Bowen Hills, Brisbane, was constructed in 1924-5 on land purchased from the Perry family (Perry House, Perry Park).
This church is unique in that it was constructed not only as a place of worship, but also as a memorial to the Catholic servicemen who were killed in the Great War.
The Spanish mission styled church was designed by Brisbane architectural firm Hall & Prentice and constructed by a Mr H Cheetham (just as well his first name wasn't Ian or Ivan!) for £9435, which included the £400 architectural fee.
In 1955, Archbishop Duhig handed the church over to the Polish community, and the Franciscan Brothers have provided mass in English and Polish from that year onwards.
Those wishing to read more about the history of this church should visit this Queensland Government EPA site.
Because of its landmark position at Bowen Hills, together with its 40-odd metre spire, the church is readily seen from many parts of Brisbane.
Another feature of the church is the blue neon cross on the top of the spire, ensuring that the church stands out at night as well as during the day.
I thought this may have been a more modern addition to the church, but in fact "the large electrically illuminated cross" was evident from the very beginning, as reported in a Catholic newspaper of the time.
It may have provided some comfort to the many soldiers stationed just down the road at Camp Perry Park during WWII." 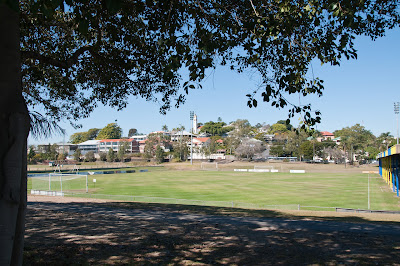 The above photo taken from Perry Park shows Our Lady of Victories on the hill.
The well-maintained soccer pitch is evident, and the street behind the Field is Folkestone St, named after the original Perry residence.
On the hill in the background is the spire of Our Lady of Victories, the church built on the site of that residence after William Perry passed away.
I played about half a dozen games on this field as a junior soccer player, mainly semi-finals or finals.
The church is aptly named for me because every game I played on this field was a victory for my teams.
I would spend many a day or night watching my favourite senior teams playing here usually with my father beside me cheering the teams home.
I remember big Barry Kelso cracking a shot from
beyond half way in the Queensland vs Norwich game and putting it over the English keepers head only to see it bounce off the crossbar at a massive force. 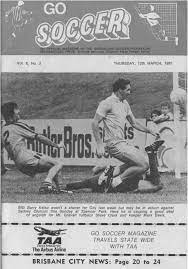 Yes, there where lots of memories here at Perry Park for me.
Now, though it is just a minor venue, since the big stadiums have been built.
Here's some history on Perry Park from "Your Brisbane: Past and Present"
"William Perry was an entrepreneur who, through his ironmongery business Perry Bros, became a substantial landholder in the Breakfast Creek area.
William Perry bought Newstead House in 1891, and he also held substantial land at Bowen Hills, where the family home, Folkestone, was situated.
The family also built Miegunyah (now also a historical site) on that land, and the area at the bottom of the hill where they used to run their horses and cows is now Perry Park." 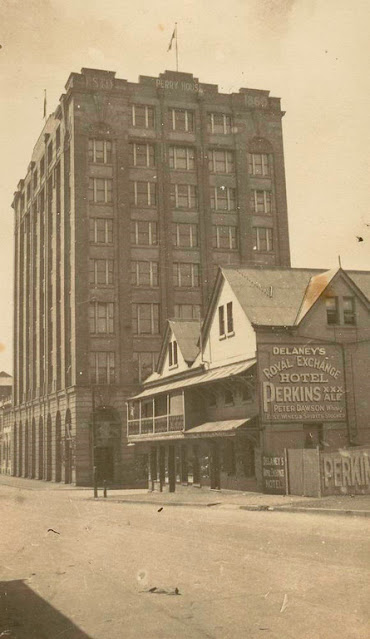 During the years 1911 to 1913, Herbert and George highlighted their business by building Brisbane's then tallest building, the eight storey Perry House on the corner of Elizabeth and Albert Streets in the city.
So thanks to Mike's post I've learned a little more about my own city and especially about the Perry's who I knew virtually nil about before.
There will be more about churches, caves (of forgotten dreams) and the movie The Last Wave in a following post that I'm working on at the moment, so this story is oddly related, in a weird kind of way.
Posted by Brizdaz (Darren) at 10/26/2011 09:40:00 PM