"Swedish furniture company IKEA says it deeply regrets that it used forced labour by East German political prisoners during the 1960s and 1970s.
Former political prisoners of the Stasi, the much-feared East German secret police, claimed they were forced to work on IKEA furniture.
The allegations prompted the Swedish furniture giant to commission a report, which found that the claims were true and that Ikea representatives were aware of the situation.
Stasi Prison Memorial director Dr Hubertus Knabe says IKEA gave contracts to the East German government and did not ask who was producing its furniture and under what conditions
A victims' group says IKEA was not the only company to benefit from forced prison labour.
IKEA says it deeply regrets the use of forced labour and says it now has one of the most rigorous codes for conduct for suppliers.
Former prisoners may now expect compensation."
http://www.abc.net.au/news/2012-11-17/report-shows-ikea-used-forced-labour/4377400
http://cultofthedeadfish.blogspot.com.au/2011/08/ikea-founder-ingvar-kamprad-nazi-ties.html
"The founder of the IKEA furniture chain, Ingvar Kamprad, is facing further questions about his Nazi past following claims in a new book.

Author Elisabeth Asbrink says Mr Kamprad was an active recruiter for a Swedish Nazi group, and stayed close to sympathizers well after World War II.
The details go beyond what Mr Kamprad has previously admitted."
http://www.bbc.co.uk/news/world-europe-14661582
"The Swedish billionaire has said his involvement was youthful "stupidity", and the "greatest mistake" of his life.
In her book, Ms Asbrink says Mr Kamprad actively recruited people
to the fascist Sweden's Socialist Union (SSS).
She says the activity prompted security police to set up a file on him in 1943 when he was 17 - the same year that he founded IKEA.
Ms Asbrink says the security police intercepted his post, and noted that he
"had some sort of functionary position"
in a youth Nazi organization."
http://senseslost.com/2009/09/21/banksy-creates-an-ikea-street-piece/
Maybe it's time to think outside of the box and buy furniture from a more politically correct source???
It never escaped me while working for them and being of Jewish descent myself, how ironic that there were Schindler's lifts all throughout the store (Brisbane).
I always joked that at least I had safe place to hide;-) 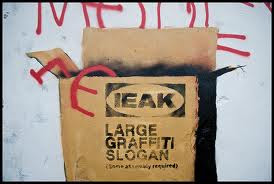 Bit of a sync with the Banksy piece...with the word Slogan...as I used to work at the Logan store in Brisbane until after 24 years service they decided to offer me a redundancy package, or the generous offer to work for them at half my fortnightly wage.
Gee ... that was a real tough decision I had to make there ;-)
The nine principles touted by IKEA Founder Ingvar Kamprad in his Furniture Dealer's Testament:
1. The product range - our identity.
2. The IKEA spirit (?). A strong and living reality (?).
3. Profit gives us resources (see principle 7?).
4. Reaching good results with small means (see principle 7?).
5. Simplicity is a virtue (simple minded staff members,that is).
6. Doing it a different way (see principle 7?).
7. Concentration (Camps?) - important to our success.
8. Taking responsibility - a privilege.
9. Most things still remain to be done. A glorious future! (My AR$E !)

I don't know much about IKEA, never even been into one of their stores so, other than a Nazi connection I'd read about somewhere, what you write is all new to me.

You mention also perhaps slave labour in India but what concerns me is how workers are treated all over the world. Nearly everything seems to be made in China, Bangladesh, Indonesia, Taiwan and so on. So little is actually manufactured (in my case) within the UK. This must cause problems in years to come.

RE:
"You mention also perhaps slave labour in India..."

Whether it is slave labour or not,it certainly is exploitative labour.Those workers would be working for peanuts and IKEA would be making bucket-loads.
But you're right Mike,
China,Bangladesh,Indonesia,
Taiwan it's where-ever these companies like IKEA can exploit the most people for the least money for the most profit.
The only solution to these kind of company's exploitation of workers is to buy local,even if it is a bit dearer.
As you say in the end we are just ruining our own economies and destroying the lives of other human beings that are out of our sight.

The other problem we have in the UK is with tax avoidance by big US companies like Starbucks, Google and Amazon. There's a bit of a backlash especially with Starbucks who some are now boycotting. We should, for all sorts of reasons - as you say - be trying to buy local.

When we were in Austria on holiday the supermarket gave a 10% discount on any local produce - good thinking.

@ Mike
RE:
" The other problem we have in the UK is with tax avoidance by big US companies like Starbucks, Google and Amazon. "

Well,then you are going to hate IKEA then -

" It Is Technically A Charity. If Nazism wasn’t bad enough, IKEA is also has one of the most elaborate tax evasion schemes of any company that still manages to operate within the law. IKEA is owned by INGKA Holding B.V., a Dutch corporation that is controlled by a non-profit Dutch foundation known as the Stichting Ingka Foundation, which was founded by Kamprad in 1982. This Foundation is headed by a five-person committee that includes Kamprad, his wife, and his attorney. IKEA’s intellectual property is owned by Inter IKEA Systems, which is owned, indirectly, by the Inerogo Foundation, which is also controlled by Kamprad and his family. IKEA has to pay 3% of its profits to the foundation to license its own trademarks. Because IKEA is owned by charities, none of its profits are taxed, making the Ingka Foundation the largest charity in the world, with a net worth of $36 billion. Of course, the charity isn’t nearly as generous as most (being as how it’s mostly just a tax evasion strategy), so it only gave away $65 million in 2010. To put that in perspective, the Bill and Melinda Gates Foundation has a net worth of $33 billion and they give away around $1.5 billion per year. The whole scheme is pretty complex, so if you want to read more about it, I recommend checking out this great
"Mental Floss" article on the issue -

His wife died a little while ago,so the article in the above comment was obviously from a few years back.

My goodness - had no idea of that. As someone or other said, can't remember who: "It's the little people who pay tax".