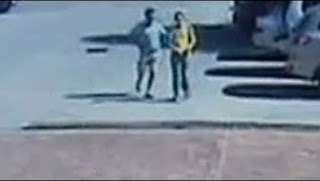 I just posted Jamie Foxx in a trailer of  the movie Collateral in this post -
Life Begins At 40, December 21st 2012?
where he is forced to drive Tom Cruise's character around LA on a crime spree, then this morning I see this story about a lady going on a nine hour crime spree in the city of Perth in Western Australia.
"A young woman casually walks through the parking lot of an
IGA supermarket in Koondoola, in Perth's north, paying no attention to the taxi driver shadowing her.
According to police, she had just forced that same taxi driver at knifepoint to take her to the supermarket – after a string of
armed bank hold-ups and carjackings across Perth.
CCTV footage shows him suddenly throwing an arm around her neck from behind and dragging her to the ground in a struggle that lasts half a minute.
"I've got the bank robber!" the driver is heard yelling, according to witnesses.
With the help of two other men, the woman was held until the police arrived."  And then there is the crane sync with Jake's Twitpic that took place yesterday as well.
Crane Sync with Jake Kotze?
http://twitpic.com/bghgzj
"This upside down SA."???
Crane from Down-under?
SA - Sydney, Australia???
That Twitpic was taken while Jake was mulling over the
Tom Cruise/Jack connections,
You Don't Know Jack?
and this post called
The Sync Whole - Thin Red Lines.
WARNING:
BAD LANGUAGE IN ABOVE YOU TUBE.
DON'T VIEW IF BAD LANGUAGE IS OFFENSIVE TO YOU.
Crane remains at site after fire and collapse
"The company is the same one that was managing a New York construction site where a crane partially collapsed during Super-storm Sandy in October. 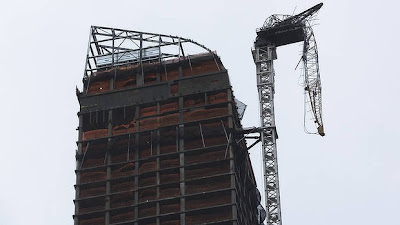 In late October, gale-force winds from Superstorm Sandy caused a construction crane to collapse atop what will become an upscale apartment high-rise.
The collapsed New York crane was operated by Pinnacle Industries. Lend Lease, the construction manager on the project, said the crane had been inspected days before the storm and was determined to be properly placed for hazardous weather."
Crane spews flames, collapses at Sydney construction site
This is truly weird.

And in one more sync twist, my father worked all his life nearly as a cab driver and my youngest son works for an IGA supermarket in Brisbane.
An IGA supermarket is where the cab driver in Perth wrestled the women criminal to the ground.
One more thing, The Thin Red Line  was shot in Australia (Oz) by FOX pictures;-)
Notice also the thin red line working its way across the You Tube at the bottom of the screen as the trailer plays ... ironic isn't it?
Also, at the 24 second mark of that above trailer we see that the movie takes place in 1942.
Posted by Brizdaz (Darren) at 11/28/2012 08:38:00 AM