The Adjustment Bureau, or Limitless??? 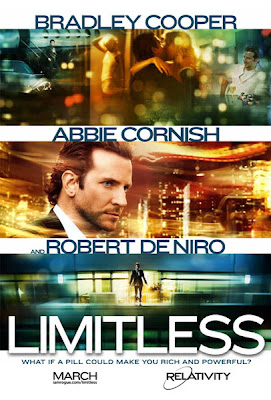 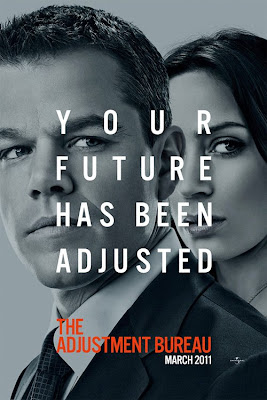 I came across a link to these posts ;
http://wellofhighstrangeness.blogspot.com/2011/03/approaching-posthuman-self.html

http://wellofhighstrangeness.blogspot.com/2011/03/minerva-current.html
from Mike Clelland's blog Hidden Experience, after seeing the bronze statue of Minerva Mike had posted on his post.

Since I once rented a house on Minerva Street, it got my attention, and I went across to read the post.
But just before reading that post I had to make up my mind about which movie I was going to see that day.
It was either The Adjustment Bureau or Limitless, as they were both on at the same time (11 o'clock).
The Adjustment Bureau is based on a short Phillip K.Dick story with a tag line of, "Do we control our destiny, or do unseen forces manipulate us?", which was the only real reason I wanted to see it, and Limitless is about a writer discovering a top-secret drug which bestows him with super human abilities.
I decided to see Limitless, because something just bugs me about
The Adjustment Bureau trailer, and I decided Limitless was a better concept, to me, and therefore gets my movie money.
Then I kept staring a the title Limitless, and kept thinking what a strange title for a movie, and how often do I see that word around?
Not too often, I thought.
Then I read a post and saw this sentence; "It appeared to me that this light, this future self was unimaginably LIMITLESS, yet still retained its identity, so much so that it was able to communicate with every aspect of itself including itself as it existed in the past."
Now, I don't know whether it was just The Adjustment Bureau who guided me there, or some 'limitless' future self.

The first photo I took was a little fuzzy, so I thought I would snap a second picture, in case the first turned out worse than it looked, but I didn't check the second picture, because I was sure I snapped it well before the lady in the blue top walked in front of the Limitless poster.
Anyway, I'm sure you can make out the Limitless poster in the first one, surely?
Although, I'm sure skeptics will say it's just the planet Venus ;- )

BTW,
I found this miniature bird figure at the doll shop, a few doors up from the cinema.
I usually pop in and buy a few miniatures for my desk and bookcase, if they are open, when I come out of a movie.
This bird looks similar to the Sacred Kingfisher in my posts below.

Update: April 7th, 2011.
I finally saw The Adjustment Bureau yesterday, and I have to say that I'm glad that I saw Limitless first (it's the better movie in my book).
I think it was just meant to be that way, anyway, or something like this (below) might have happened to me when I was ringing for session times;- )
Posted by Brizdaz (Darren) at 3/23/2011 05:42:00 PM