I wrote this as a comment in an earlier post below:
"I have just gone to change the date on the black cat calendar to today's date and found out I can't, because there is no number 3 on any of the 2 blocks.
Which means I can't make the dates 3, 13, 23(my birth-date), 30 or 31 appear with this wooden black cat calendar.
Which may be great if you're superstitious and don't ever want to see 13 associated with a black cat, but as a far as a calendar goes, it's no good.
The problem is that there should not be two eights, one of them should be a three instead of an eight.
I could buy some red paint and try to modify it myself, but I think I'll just leave it on the date that I purchased it, if nothing else, it will make a good conversation piece, and it will help me to remember the number on my car number-plate."

If you had read through the posts below, you would know about the role, the number sequence 11:11, synchronicity, books, movies, certain blogs, the number 23, and a certain black cat played or play in my life.
Well, I bought this wooden black cat calendar on Sunday 27th March, 2011 form a shop in Byron Bay called
"Kathmandu Connection" (of all names), which is located at 3/9-11 Byron Street (just so I could throw in one more 11;- ).
Then I took it home and set it to the correct date, and discovered that two sideways eights were over the number 27, which is the infinity symbol on the DVD that I bought that day also.
When I was taking a photo of my "Grateful Dead" sticker on my windshield for the post below this one, I was curious to see what the numbers on my plate added up to.
It was 23, but the number 878 was also contained in the blocks for 27 on the calendar...
and if I showed you my bank account number...which I'm not going to for obvious reasons...the sequence 8827 comes up in that perfect order somewhere in my eight digit account number.

But the point is, that no matter how meaningful this number sequence turned out to be on the day that I bought it, the fact is it was all from an accident, or imperfection in the product...Wabi Sabi the Japanese might say.
Which made me think of a book I purchased a year, or two ago about a cat named Wabi Sabi.
Quoted from this site on Wabi Sabi;
http://nobleharbor.com/tea/chado/WhatIsWabi-Sabi.htm

"Pared down to its barest essence, wabi-sabi is the Japanese art of finding beauty in imperfection and profundity in nature, of accepting the natural cycle of growth, decay, and death.
It's simple, slow, and uncluttered-and it reveres authenticity above all.
Wabi-sabi is flea markets, not warehouse stores; aged wood, not Pergo; rice paper, not glass.
It celebrates cracks and crevices and all the other marks that time, weather, and loving use leave behind.
It reminds us that we are all but transient beings on this planet-that our bodies as well as the material world around us are in the process of returning to the dust from which we came.
Through wabi-sabi, we learn to embrace liver spots, rust, and frayed edges, and the march of time they represent.
A  favorite Japanese phrase for describing wabi-sabi is "natsukashii furusato," or an old memory of my hometown.
(This is a prevalent mind-set in Japan these days, as people born in major urban areas such as Tokyo and Osaka wax nostalgic over grandparents' country houses that perhaps never were.
They can even "rent" grandparents who live in prototypical country houses and spend the weekend there.)"
In the book pictured (right), it is stated that Wabi Sabi is away of seeing the world that is at the heart of Japanese culture.
It finds beauty and harmony in what is simple, imperfect, natural, modest, and mysterious.
It can be a little dark, but also warm and comfortable.
It may best be understood as a feeling, rather than an idea. 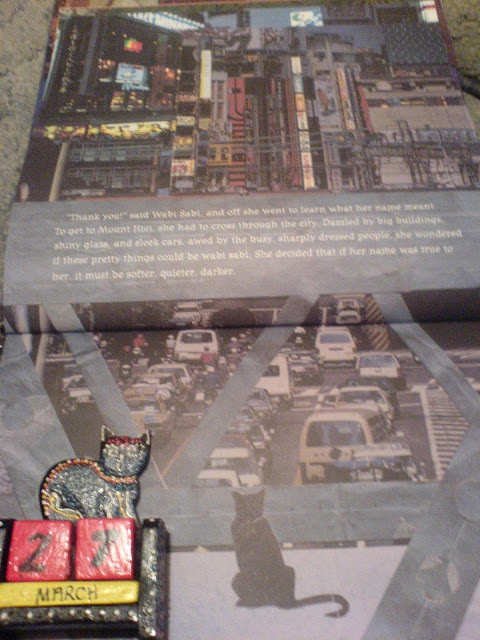 Basically the book is about a cat named Wabi sabi who goes on a quest to find out what her name means.
It's done with a series of collages and haiku (short traditional Japanese poems).
It's like a children's book, but I would say it's more like artwork for adults, although it could work both ways, I suppose.
The thing about the wooden calendar though, is that it is so imperfect, that it just turns out to be a perfect work of art, that could only really be speaking to me personally.
Anybody else that had of purchased it probably would think it was a pile of nonfunctional junk and demanded their money back, or a replacement.
This little work of imperfect art will sit on my bookshelf as a reminder to me of the spirit of Wabi Sabi and the mysterious universe and just what it can show me through those little glitches, that may well be worth studying a little harder, to see what they reveal on a personal level, at least. 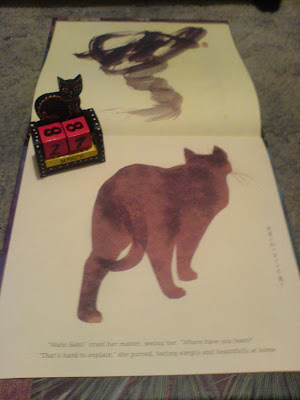 I guess it speaks to me on many levels, really.
Aside from the Wabi Sabi aspect, it also reminds me of my old cat Sylvester and his spirit energy.
Plus, if you look closely at the cats face, it could also double as an owls face, and it's right eye is painted a little imperfectly giving it the slight appearance of a wink (possibly from the right side of the brain?).
Also, it's made up of dots and lines, which gives it the look of a spirit energy holding the particles of matter together, to give form to the cat.
Maybe that's why Aboriginal painters use the dot style so much?
It is an apt artwork in many ways, because if there was a creature on this planet (to me anyway) that personified perfection, it would have to be some type of cat.
I have two dogs now, and don't get me wrong, I love 'em, but compared to the grace and skill of a cat, they're clowns.
Cats just have that superiority and sense of perfection about them, compared to dogs. 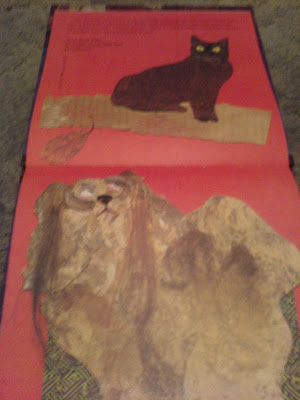 So, having this little imperfect cat artwork will also remind me of Salvador Dali's famous saying;

"Have no fear of perfection - you'll never reach it."