I've just finished reading what I thought was one of the best fiction novels that I have read for some time, Tony Vigorito's
Nine Kinds of Naked.
Some readers won't get it...but those who do will love it.
I had a lot of synchros while reading it.
Some I have already mentioned in posts under this one and some I haven't mentioned.
One that really astounded me was this one, 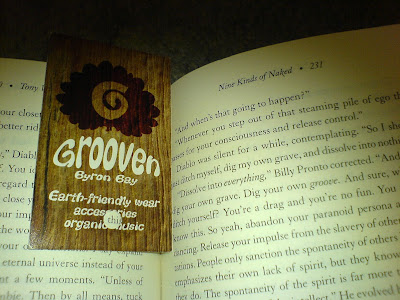 I'm in the habit of just using calling cards or pages of magazines that I have picked up from shops or attractions on my visits that I feel are or will be of future significance to me at a later date down the track for some reason.
The above photo shows the card from a Byron Bay shop that I had paid a visit to last time I was there.
I used this as a bookmark while I was reading Nine Kinds of Naked, because it was the first thing I picked up that was laying on my desk at the time, and I felt quite comfortable using as a bookmark.
Nothing struck me out of the ordinary until I reached page 231, where I came across this passage;
"So should I just ditch myself, dig my own grave, and dissolve into nothing?"
"Dissolve into everything,"Billy Pronto corrected."
And don't dig your own grave.
Dig your own Groove.
And sure,why not ditch yourself?
You're a drag and you're no fun.
You already know this.
So yeah, abandon your paranoid persona and start dancing.
Release your impulse from the slavery of others' expectations....The spontaneity of the spirit is far more trustworthy than the deliberations of the intellect."
Then Tony went on to write about the golden mean (Phi) and the golden spiral, where the two main characters are talking about the number 9.
Oddly enough it is on page 239, which is my birth-date (Sept 23rd).
"Three times three, number nine is the triple trinity, thrice sacred, the supreme superlative.

That's why we say things like, on cloud nine."
Also in another place on the page it is written that 9 is the cabalistic number for the Holy Unspeakable Name of God.
"As the last single-digit number, nine represents the highest attainment in any endeavor, the zenith that cannot be surpassed."
Then he writes about the Golden Mean and the golden spiral, which approximates the shape of the number 9.
The Golden Ratio: Phi, 1.618 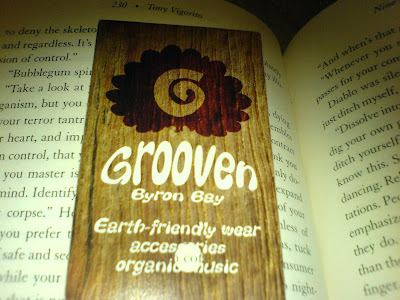 I looked at the "Grooven" calling card and noticed the same spiral Tony was writing about just above the word "Grooven" on the card!?!
Then yesterday I paid a visit to Scott Alexander-King's
Animal Dreaming shop in Byron Bay...and what should he have for sale, but the shell representing the golden spiral, which is photographed laying on my novel in the picture at the very top of this post. 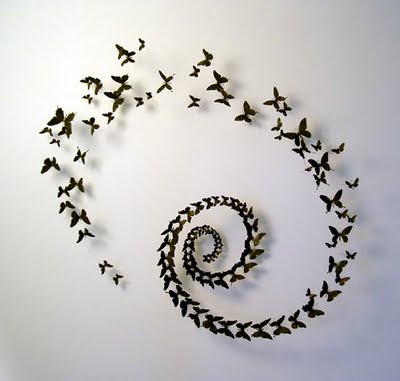 Tony claims to have written the book by just using the synchronicities that came into his life at the time.
and I found this interesting clip on one of his blog pages
Wisdom: A Tale of Dental Redemption