I've just come across the sad news of Sarah Watt's passing today.
She was a great filmmaker and it was a shame she didn't get to bless us with more fine films.
I did a post on Sarah and her work on the 11th of August this year.
Look Both Ways
Unfortunately I had no idea her illness had relapsed.
Here's what the Sydney Morning Herald wrote on her passing;

"The much-loved Australian writer, director and artist Sarah Watt died on Friday after a long battle with cancer.
Watt, 53, the wife of actor William McInnes, was recognised as a rare talent through a series of hearfelt animated shorts before triumphing with the 2005 film Look Both Ways, which starred McInnes as a photographer dealing with a cancer diagnosis.
It won her best film, director and original screenplay at the Australian Film Institute Awards as well as the discovery award at the Toronto International Film Festival.
But by the time of the film's release, she was dealing with her own diagnosis of breast cancer. In her heartfelt
2009 film,My Year Without Sex - which SBS screened last night - she chronicled the life of a mother and wife coping with a serious medical diagnosis.
A death notice from the family in The Age said Watts ''died peacefully at home filled with the love she gave to those who adored her - her family.
A life of courage humour, intelligence, generosity, honesty and grace.''
More than most directors, her films drew touchingly on her personal experiences.
''When I go to see films or look at paintings, I want to be moved, and that usually comes from something personal in the artist,'' she once said. ''So that's why I raid my own life a bit to make films.''
Watts is survived by McInnes and her two children Clem, 18, and Stella, 13.
Her first child died during birth and inspired her 1995 short film
Small Treasures.
Even after being diagnosed with secondary bone cancer two years ago, Watt continued her creative work.
This year, she was on the jury at the Sydney Film Festival, released the memoir
Worse Things Happen at Sea, which she wrote with McInnes, and opened a photography exhibition in Melbourne late last month. 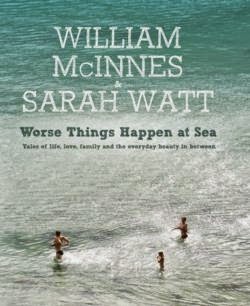 Oscar-winning animator Adam Elliot, who Watt taught at the Victorian College of the Arts in 1996, said Australia had lost a ''pure filmmaker''.
''She will go down in film history as somebody who put the rest of us to shame.
She didn't make films in pursuance of fame or money, she made films because she had to express herself - in many ways she was a pure filmmaker,'' he said.
Friend and film producer Bridget Ikin,
who produced  Look Both Ways
and My Year Without Sex, said Watt continued working right up to her death. ''Every ounce of her being was creative, she couldn't stop,'' she said.
''She was a truly original creative person, always quick to see the funny side and full of compassion.
I loved how she always could open up fresh ways of looking at the imperfections of our families and ourselves.''

If you haven't seen Sarah's films, do so and you'll will see what a treasure has been lost to this world.

I've never heard of her, but I will certainly treat myself now to her films. Thanks, daz. Way too young to pass on.