I asked my blogging buddy King Uke to do me up an image of
Russell Crowe as Freddy Kruger out of Nightmare on Elm Street.
As Russell's beloved South Sydney Rabbitohs play in a similar style jersey to Freddy's jumper.
The picture at the top of this post is the result.
Te, he, he :- ) 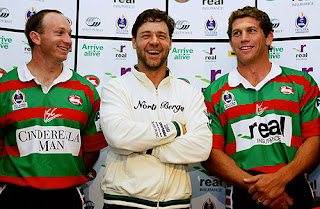 For those reading this post who don't know about Russell's connection to the South Sydney Rabbitohs, here is what Wikipedia has to say;
"Crowe is a known sports fan and has been a supporter of the
rugby league football team the South Sydney Rabbitohs since childhood.
Since his rise to fame as an actor, he has continued appearing at home games, and supported the financially troubled club.
Following the Super League war of the 1990s Crowe made an attempt to use his Hollywood connections to convince Ted Turner, rival of Super League's Rupert Murdoch, to save the Rabbitohs before they were forced from the National Rugby League competition for two years.
In 1999 Crowe paid A$42,000 at auction for the brass bell used to open the inaugural rugby league match in Australia in 1908 at a fund-raiser to assist Souths' legal battle for re-inclusion in the League.
In 2005, he made the Rabbitohs the first club team in Australia to be sponsored by a film, when he negotiated a deal to advertise his film Cinderella Man on their jerseys.

Crowe is friends with many current and former players of the club, and currently employs former South Sydney forward Mark Carroll as a bodyguard and personal trainer.
He has encouraged other actors to support the club, such as
Tom Cruise and Burt Reynolds.
On 19 March 2006, the voting members of the South Sydney club voted (in a 75.8% majority) to allow Crowe and businessman
Peter Holmes à Court to purchase 75% of the organisation, leaving 25% ownership with the members.
It cost them A$3 million, and they received four of eight seats on the board of directors. A six part television miniseries entitled "South Side Story" depicting the takeover aired in Australia in 2007.
On 5 November 2006, Crowe appeared on
Tonight Show with Jay Leno to announce that
Firepower International was sponsoring the South Sydney Rabbitohs for $3 million over three years.
During a Tonight Show with Jay Leno appearance, watched by over 11 million viewers, Crowe showed viewers a Rabbitoh playing jersey with Firepower's name emblazoned on it.
Crowe helped to organise a rugby league game that took place in Jacksonville, Florida between the South Sydney Rabbitohs and the English Super League champions Leeds Rhinos on 26 January 2008 (Australia Day).
The game was played at the University of North Florida.
Crowe told ITV Local Yorkshire the game was not a marketing exercise.
Crowe wrote a letter of apology to a Sydney newspaper following the sacking of South Sydney's coach Jason Taylor and one of their players David Fa'alogo after a drunken altercation between the two at the end of the 2009 NRL season.
Also in 2009 Crowe persuaded young England international forward  Sam Burgess to sign with the Rabbitohs over other clubs that were competing for his signature, after inviting Burgess and his mother to the set of Robin Hood, which he was filming in England at the time.
In the 2010 post-season it was reported that Crowe's influence was critical in persuading Greg Inglis, one of the world's best players, to renege on his deal to join the Brisbane Broncos
and sign for the Rabbitohs for 2011.
On 5 December 2010 the Sunday Telegraph reported that the NRL was investigating the business relationships Russell Crowe has with a number of media and entertainment companies in relation to the South Sydney Rabbitohs' salary cap.
Salary cap auditor Ian Schubert was reported to be delving into Crowe's recent dealings with Channel Nine, Channel Seven,
ANZ Stadium and V8 Supercars.
On 26 January 2011 the Sydney Morning Herald reported that the Rabbitohs were about to embark on a five year multi-million dollar sponsorship deal with the giant Star City Casino.
Souths also announced a corporate partnership with the bookmaking conglomerate Luxbet.
Previously Crowe had been prominent in trying to prevent gambling being associated with the Rabbitohs.
Reuters, on 3 January 2008, reported that Crowe was
"fighting a new gladiatorial combat to wean his countrymen off their addiction to gambling machines."
In May 2011 Crowe was credited for an arrangement with Fox to have the
2011 State of Origin series broadcast live for the first time in the United States, in addition to the NRL Grand Final"
http://en.wikipedia.org/wiki/Russell_Crowe#Rugby_league 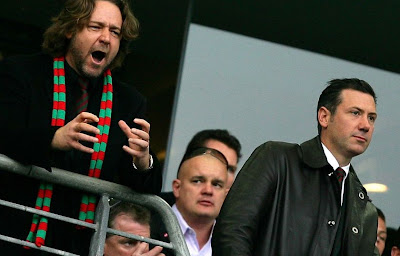 Maybe I didn't need to get King Uke to do me a Freddy Crowe picture afterall ;- )
And the nightmare continues for Russell.
Last night Manly (a club I can't stand to be honest) beat his South Sydney team 23 to 6. 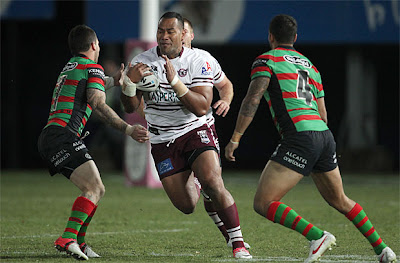 Let's hope those losing ways at Souths continue next week, as the White Rabbits take on my team the Sharks. 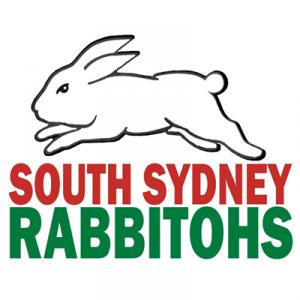 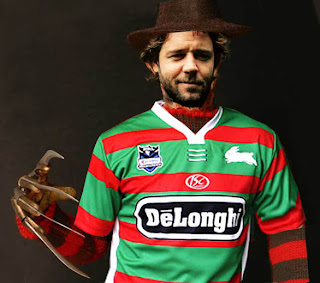 And here is the tag line, if Rus ever makes this movie -
WHATEVER YOU DO, DON'T FOLLOW THE WHITE RABBIT...OR YOU'LL BE SORRIER THAN A CRONULLA-SUTHERLAND SHARK'S SUPPORTER. 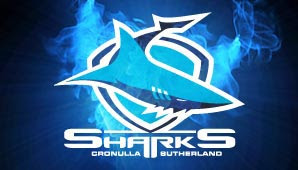 You're not getting me embroiled in a sporting war here are you! Go the Warriors! Crowe's a Kiwi... why's he supporting an Aussie team?

Re:
"You're not getting me embroiled in a sporting war here are you!"

No.
A sporting nightmare,more like it.
And how did the Warriors get on last week,
by the way ???
I do believe that the sharks are still licking their chops.-)