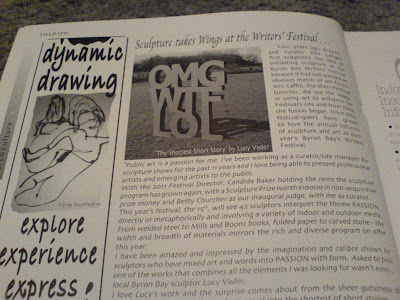 I was reading a story in a magazine about a sculpture that was featured at the Byron Bay Writer's Festival last year (2011) called "The Shortest Short Story".
It consisted of the letters OMG, WTF, LOL.
I didn't snap a picture of this sculpture at the time I was there, so I decided to do a Google Image search to see what it looked like in living colour.
As I was searching for this picture I was listening to a talk about sync at this site,
Synchro video
I was thinking that OMG, WTF, LOL could almost be the reaction you get when you encounter a weird synchronicity with overwhelming odds. 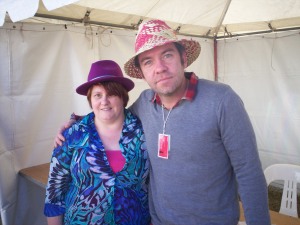 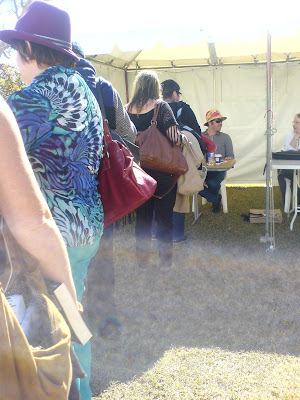 Now here's the picture I snapped of Brendan from where I was standing in the line to get Brendan's signature on his book.
Does that lady look familiar?
I wrote about it here in a post last year,
How It Feels??? Synchronistic That's How! (Part 1)
Talk about six degrees of separation or what?
But it gets weirder, because when I scrolled down her post I found this photo below 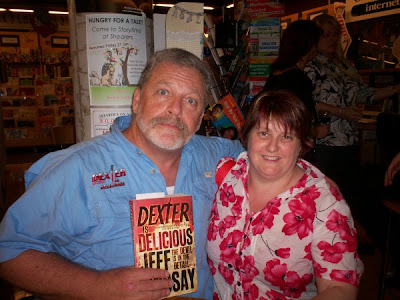 A photo of her with Jeff Lindsay in Sydney.
Now I attended a talk in Brisbane with my sons, because they love Jeff Lindsay's work.
But here's the kicker, Rob and Trish who are the blog owners at
Synchrosecrets
are good friends with Jeff and his wife.
A Stabbing Synchro

Not only that but two of my synchronicity stories are printed in Rob and Trish's book Synchronicity and the Other Side which is pictured just to the right-hand side of the video clip on synchronicity in their sidebar.

And how did I come across Rob and Trish's website
in the first place?

From reading this book pictured above.
In fact I only ever started this blog so I could respond to their website.
I never intended to write my own stuff at all.
So yeah, look where sync does take you if you go with it.
Small world or what?

I went to Andras's website this morning and saw this post,
August in OL-IMP-IA
and he said,

"A little after 7:30pm a seagull shat on my head.
I was walking by the old K Records building on Legion, talking on the phone with a potential Radio8Ball collaborator;
a talented director from the neighborhood named Zach Weintraub."
Well check this out - 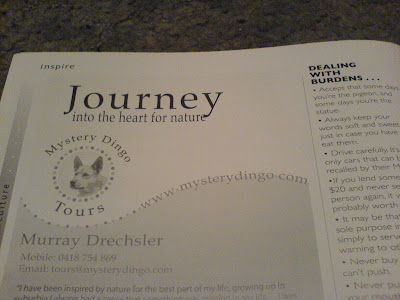