Green Volkswagen on the Synchronicity Roundabout

I told my story of one of the spookiest synchroicities that I have ever witnessed in my life (and I have witnessed a few) on the day my father-in-law, John, died on the 30th October last year (of a sudden and unexpected heart attack) at this site -
John and the Wild Parrots
I don't want to repeat the whole story here, so if you would like read it click on the link above. 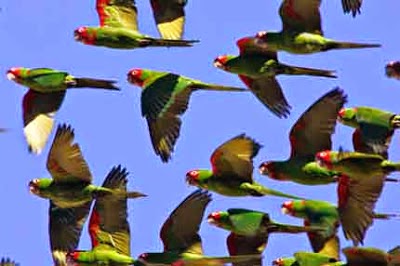 I just want to recap on this part of the story, for the relevance of this post:
“Just earlier this week, my mother-in-law was telling us all today how he loved when the parrots * [I should have said lorikeets instead of parrots here] would do their mating dance and he would imitate the male who would wobble up behind the female and then flap it’s wings up and down (a bit like a dirty old man flapping his raincoat).
This would send him into hysterics.
I was going to say then (but I didn’t) that maybe we should look for a sign involving a parrot*, since this was an animal he often joked about coming back as, even though he believed once you are dead you are dead.
Anyway, my mother-in-law wanted to have the TV going to try and take her mind off the raw emotion and it was on
Australia’s Funniest Home Videos and what should come on the screen…you probably guessed it…two parrots * trying their mating dance out on an artificial parrot."

I couldn't find a video clip of that particular Funniest home video, but I did find this pretty good substitute;
and we used this clip above at his funeral.
Now not long afterward, I was  reading the book
When God Winks on New Beginnings by SQuire Rushnell .
And in it SQuire tells the story of how he and Vin DiBona got
America's Funniest Videos on the air, through a series of synchronicities, in the chapter called
Putting the Ten in Tenacity (page 76).
But in an earlier chapter in the same book,
Winks in a green Volkswagen, SQuire tells how he got his start in radio, by being picked up in a green Volkswagen by his DJ hero Dean Harris, while heading for an job interview ten miles up the road (which he was running late for), which launched his career in radio, and the entertainment industry.

I had no idea, before purchasing this book, that SQuire Rushnell was one of the people, if not the main person responsible for getting  America's Funniest Videos on to the airwaves, which would later, in a roundabout way, be responsible for my own spooky synchro on October 30th last year.
Once I knew this fact about SQuire, I started Google-ing video clips to see if there was any with him in, so I could see what the man himself was like.
The first one that I came across was this one;
Squire Rushnell "Good Morning America" 4/24/09
Now, I should backtrack a moment and tell you that the main reason I purchased his book was because the cover reminded me of a dream I had had of a door in an open field,very similar to that one on the cover.
And a few nights before I saw this You Tube clip of SQuire talking about the Emmett Kelly synchro, I had a very vivid dream, where I was being pushed up a hill in a pale sky blue (very close to this background colour on which this blog is written) toy car by my dead Father-in law, but I was an adult like I am now.
And I had to sit on the boot with my legs astride the doors, as I was too big.
He pushed me up the hill, and then I coasted down the hill, by myself, and into a house, which in the dream I believed to be mine and my family's, but isn't in our real life.
In the above YouTube, SQuire tells the story about Emmett Kelly and his daughter, which I found...well...spine tingling.
I've always loved pictures of this sad clown on a subconscious level, as I've grown up through the years.
But I  never knew anything about him until I saw this clip.
I wanted to buy some sort of model car to place on my desk, so I would not forget that strange life like dream starring my dead father-in-law, but try as I might I couldn't find anything close.
Then after hearing about Emmet, I was so impressed with the story of his passing, that I wanted a sculpture of Emmet to remind me of all the synchros which had led me to that point.
Then I came across this; http://www.ronlee.com/emmetts_ride.htm
I was amazed when I found this sculpture, but was just as amazed to find the sculpture of the green VW, as well.
Which brings me back to SQuire's sync about how he got his start, which led to his career, which led to my sync.
Like one big circle...or traffic roundabout. 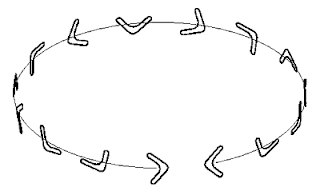 Maybe it's just the Universe's way of telling me that we're just all a bunch of clowns, and that the laugh is on us ;- ) 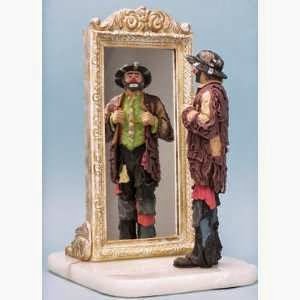 But, I like to think that it's leading me on a significant journey.
Like Albert and I say; 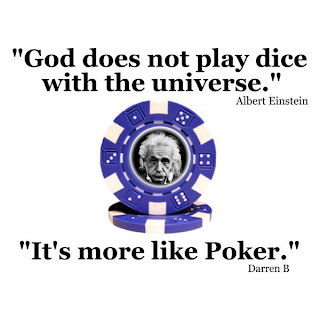