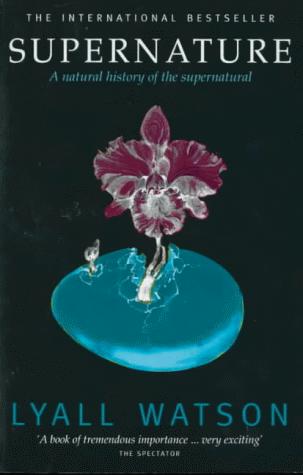 I've been reading The Holographic Universe as people who have read my last few posts would know.
And this morning I was reading page 126, the sub-chapter called
Psychokinesis on a Grander Scale.
Where Talbot writes,
"Biologist Lyall Watson, author of the bestselling book Supernature and a scientist who has studied paranormal events all over the world, encountered one such individual while visiting the Philippines.
The man was one of the so-called Philippine psychic healers, but instead of touching a patient, all he did was hold his hand about ten inches over the person's body, point at his or her skin, and an incision would appear instantaneously.
Watson not only witnessed several displays of the man's psychokinetic surgical skills, but once, when the man made a broader sweep with his finger than usual, Watson received an incision on the back of his own hand.
He bears the scar to this day."
I recalled reading Watson's Supernature years ago, so long ago really that I don't remember that much about it except the bright orange cover with the words Supernature printed on it. 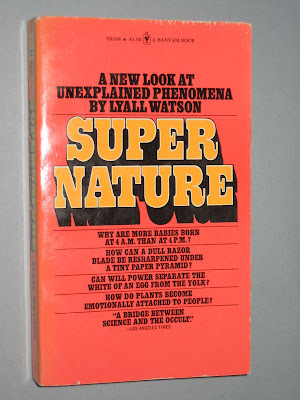 And the one I've just bought at Amazon Used Books has the cover in the photo below, I'm lead to believe. I must say I like the top one the most of all the front covers.
But here come the syncs...I wondered if the scars where still on Lyall's hand today and wondered whatever happened to him, so I Googled his name.
Lyall Watson
Sadly, he passed away on 25 June, 2008, according to the above link.
Which also informed me, "He is credited with the first published use of the term "hundredth monkey" in his 1979 book, "Lifetide".
It is a hypothesis that aroused both interest and ire in the scientific community and continues to be a topic of discussion over a quarter century later." 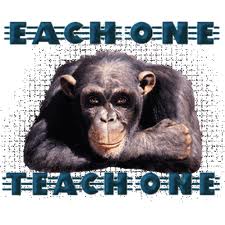 But this last part on the Wiki page hit me like a bolt from the blue,
"He was the eldest of three brothers, one of whom (Andrew) lived in Gympie, Queensland, Australia. It was while visiting Andrew that he died on 25 June 2008."
My mum's side of the family are from Gympie, and I have quite a few relatives that still live there.
In fact, the first funeral I ever attended was my uncle Bill's, which was held in Gympie.
I was probably 7 or 8 years old, I'm not too sure, all I really remember of the day was the strong smell of pine trees as we drove into the town and the really high TV antennas people had coming out of their roofs, because there was poor signal reception in the town.
I don't ever remember visiting Gympie again since that day, as most times the relatives would come down to visit us in Brisbane, rather than us go up there.
I wanted to know more about Watson and the Gympie connection, so clicked on the first link in the Wiki "References" section;
Lyall Watson, Adventurer whose books about the paranormal promoted New Age ideas and who introduced Uri Geller and sumo wrestling to Britain.... And I found this link just as fascinating, especially this line,"Describing himself as a "scientific nomad", he considered conventional science simply inadequate to explain much human experience".
Nothing much has changed there.

And this paragraph,"Although he had no children, he indulged his five nieces on their 18th birthdays by taking them anywhere in the world they wanted to go.
On the first of these trips – to Egypt – a diner in a restaurant offered Watson 200,000 camels for the hand of his eldest niece, Katherine.
After a lengthy, pregnant pause, Watson successfully called the admirer's bluff when he replied that her price was her weight in gold".

I then Googled  Supernature + Lyall Watson again to see if there were any other sites worth looking at, about this fascinating man.
And I found this one;
Katherine Lyall-Watson

A blog run by the "Katherine" mentioned in the above article from "The Telegraph" newspaper.
Katherine says, "My uncle was the author Lyall Watson.
He was born Malcolm Lyall-Watson in Johannesburg, South Africa on 12th April 1939.
He died in Gympie, Australia on 25th June 2008 and I had the privilege of being with him shortly before he passed away".
While he delighted in his notoriety and in giving interviews, he kept his real self very private.

I loved him so much and yet, when he died, I felt as if I’d hardly known him.
That’s one of the reasons that I’ve now started researching Lyall’s life.
I plan to write a play about my journey to discover the man behind the myth.
If I find out enough about him I may also try writing his biography.
I’ve been contacting the people I know who were in Lyall’s life – family members and friends – and asking them to share their memories with me.
And now I’m asking the people I don’t know, who were also part of his life, if they would like to share their stories.
If you stumble on this page and you knew Lyall Watson and feel happy to share your memories with me, I would love to hear from you.
You can make a comment on this page, or you can contact me by email"

If you click on this link you can see a picture of Katherine with Lyall at the pyramids for her 18th birthday -
http://katherinelyallwatson.wordpress.com/2009/04/13/lyall/
Her blog looks like it is still active, as there is a recent post, and I have to say this blog looks worth reading, by the quick scroll I did on it.

I remembered thinking it's a shame Mike Clelland never got to do a podcast with Lyall at Mike's Hidden Experience blog, as I would have loved to of heard him being interviewed.
And then I find this wonderful interview posted on Kathrine's blog;
Lyall Watson radio interview

This is a great interview.
And here is anther sync...Today is February 26th...and this radio interview was recorded on...
Lyall Watson radio interview 26 Feb 1996
Tomorrow's World: Elliot Light-Pen 22 March 1967 - BBC
Also the vase with the purple flowers pictured above, I bought from the Chinese temple on
Chinese New Year, which I blogged about here;
Welcome to the Year of the Dragon
It was the first time that I picked up on the pine cone/ pineal gland imagery in just about all major religions of the world.
A lady was selling these flowers in a pineapple shaped glass vase filled with sand up to the top and laced with coloured rocks, so it looked even more pineapplely at the time that I bought it.
It had been raining that night and the flower stall was out in the open, so the flowers had rain on them.
This gave my brain the illusion of real flowers, for some reason, so I bought them to take home to my wife.
They were only five dollars, too.
I thought the vase was at least worth five bucks anyway, and that she could at least keep that when the flowers died.
But the next morning I realized my mistake...the flowers weren't real.
They weren't going to die.
Kind of reminds me of the cover, right up the top of this post, with the purple orchid emerging from a blue cosmic egg, don't you think?
Posted by Brizdaz (Darren) at 2/26/2012 07:16:00 PM