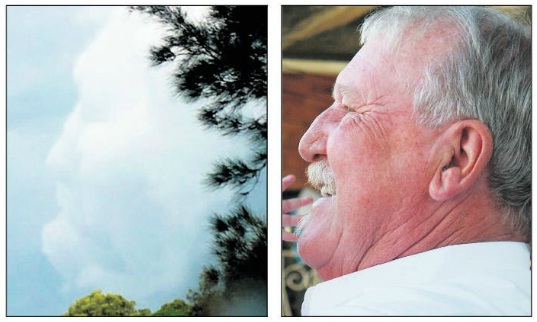 "Marion Dawson says a photo of clouds that bear a remarkable resemblance to her late brother Gerry Wells gives her "goosebumps".
The photo was taken on January 9 at Ocean Shores, on NSW's far north cost, at the same time as Mr Wells was flying overhead from Brisbane to Sydney to visit family and friends, the Northern Star reports.
Mr Wells, 62, died from a heart attack only a few days later on January 24.
Mr Wells, who lived in Brisbane, never saw the photo, which was taken by a former editor of the Northern Star, Russell Eldridge, and published in the paper on January 11.
It was only after Mr Wells passed away that a friend of his son saw the photo on the internet.
The family used the cloud photo in a leaflet handed out to people at his funeral.
Ms Dawson said they all got goosebumps when they saw the similarity.
She said she did not believe it was a coincidence that Mr Wells was flying to Sydney to catch up with family and friends while the photo was being taken below and that he still managed to get home to say goodbye to his wife one last time.
"I truly believe somebody greater than us knew this was about to happen," she said"
From the Northern Star newspaper,
Face in a cloud intrigue
"AT EXACTLY the time that Gerry Wells was flying through clouds over the Northern Rivers on a journey from Brisbane to Sydney on January 9, former Northern Star editor Russell Eldridge took a photo of clouds over Ocean Shores.

The cloud formation formed an image of a man's face. Mr Eldridge sent it to The Northern Star and we were so impressed that we published it on January 11.
All this would be of little significance were it not for the fact that the day after returning from spending two weeks in Sydney, visiting many friends and family members, Gerry Wells, 62, died suddenly and completely unexpectedly from a heart attack on January 24.
One of the people he spent quality time with in Sydney was his son Dean Wells. Dean had a friend who happened to see The Northern Star online, saw Mr Eldridge's photo- graph and was struck by the similarity between the face in the cloud and the face of Dean's father, Gerry.
"This friend called out to Dean - 'Here, look at this, it looks just like your Dad'!" Gerry Wells's sister, Marion Dawson of Goonellabah, said yesterday.
"Dean sent the cloud picture to family members by email.
"When I looked at it, it gave me goosebumps. It's so like my brother, and was taken just at the time when he was making what turned out to be his last journey to visit the people he loved in Sydney. It brought tears to our eyes."
The family used Mr Eldridge's picture on the back of the leaflet handed out to people who went to his funeral. Gerry Wells was one of a family of 10, of whom sister Marion is the eldest. He is the first of the siblings to die.
"It was such a shock to us all," Marion Dawson said.
"He seemed healthy and strong but when he came back from Sydney he told his wife he was going to make an appointment to see a doctor about a pain in his chest.
"Moments later, he died.
"Thinking now of all the people he went to spend time with in Sydney, it was like he was going to say goodbye to them all.
"There's a picture of him, taken in profile, with his little granddaughter, Grace, who's just one year old.
"It's so like the face that appeared in the cloud when Gerry was flying to Sydney.""
And if you found that story of precognition spooky, you might also like this one,

In the 1993 movie, Dragon: The Bruce Lee Story, the actor playing Brandon Lee is shown playing with a toy train set as Bruce Lee comes home from filming Enter the Dragon (and after battling a vision of a demon that was after him and Brandon).
There is a creepy Joker/Crow doll laying (dead?) against a mirrored window behind him (which looks a bit like Hedger's Joker character also) and an evil looking image in the cushion above Brandon's head (staring at the back of his head).
REMEMBER: Brandon was still alive in real life when this movie was filmed.
He would die on the set of The Crow, one month before this movie was released, so this movie was all wrapped up and ready for release before Brandon died.
Creepy stuff!!!