When I found the above photo of the blue face mask, I had started coming across blue faces and blue beings everywhere I looked.
And I wasn't even consciously looking for them.
That was the weird part.
For instance that photo of the blue mask above, was from Clifford Pickover's
Reality Carnival
site.
I went to check it out after thinking about buying his book  from Amazon, The Lobotomy Club (a club some of you reading this blog would think I'm already a member of, no doubt ;- ) 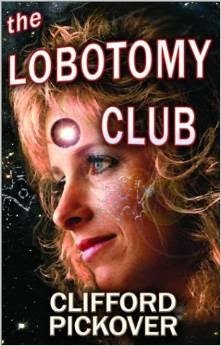 I had the book on my wishlist to buy, but didn't know much about Clifford Pickover, so I went over to checkout his website, which I hadn't visited before.
On the front page in the top left-hand corner is the picture of the blue mask with no explanation of why it is there.

I decided that I would like a copy of that picture, so I clicked on it hoping to get a bigger resolution of the image.
Then it took me to a separate page with this message,
"If you arrived at this page, you probably clicked on the photo of a woman named Astrid at RealityCarnival.Com.
Very few people have thought to click on the photo.
Congratulations.
Astrid is interested in voodoo, shamanism, plant-human symbiosis, psychedelics from Central and South America, and the structure of ultimate reality."
Clifford's picture reminded me of a picture I stumbled across from a series of coincidences involving other bloggers,which you can read about here;
The "Bird of Paradise" "Coincidence"
Oddly enough, I never wanted to blog about my experiences to others, as I like my privacy and solitude too much and don't need people casting aspersions over my beliefs for their own amusement.
Still, after following Mike Clelland's blog
Hidden Experience
for a while and seeing how he was really putting himself out there, I started feeling a compulsion to share any strange synchronicities that I could back up with photos, or some sort of "proof".
Hence this blog.
But I find it amazing looking back and seeing how far across the river of life I have made it, by stepping on one synch at a time like stepping stones.
There is no way I would be where I am today, if not for going with the sync flow.
It's astounding what you can uncover by just being prepared to do a bit of digging in the synchronistic fields ... there definitely is gold awaiting any prospector who is prepared to dig.
For instance, now I will relate a series of synchronicities and themes that came together for me last week, involving two very different bloggers, and myself (also just as different as the other two).
One is Mike Perry, who is mentioned in the Bird of Paradise link above, underneath Larry Santana's painting.
Mike has a blog called 67 Not Out, where we have shared a few mind blowing "coincidences" about our lives.
The Church pictured above being one such "coincidence".
You can read about it here (in fact, you'll need to, to see where this is heading);
Our Lady of Victories Sync
The other blogger is Christopher Hunter Myers, or Christopher C Myers, as he is also known.
Unfortunately he seems to have taken down his blogs, so it is useless to give out a link to a dead blog.
Chris has a chapter in The SYNC Book called,
"The Magick of Synchronicity".
Chris was saying on his blog that he takes note of coincidences involving Hamilton since that was his first major movie role.
I thought he also mentioned something to do with the movie
The Patriot starring Mel Gibson  (but I could be wrong).
This clicked a connection in my mind to the Dendy Cinema in my hometown of Brisbane, Queensland, Australia, owned by Mel Gibson's company ICON films ... which happens to be in the suburb of Hamilton.
Another synchronicity was that Christopher's son was born on my 40th Birthday - September 23rd, 2004.
Anyway, the synch from the other night that linked these coincidences together was I had received a double pass to a movie screening for The Grey a movie starring Liam Neeson.
It's a movie I never would have bothered seeing at the cinema, and I didn't really feel like going out by myself (nobody else could make that screening with me) to the other side of town.
But the church with the blue neon cross isn't far from there, so I thought this would be a good opportunity to drop by after the movie and take a few snaps of the cross lit up at night, since I couldn't find any on the net.
I had received the passes from Filmink magazine, which is the magazine I had won the Signs watch from.
The movie which starred Mel Gibson as the priest who had lost his faith when his wife dies in an automobile crash.
NOTE: I had to replace the Signs You Tubes with the ones below at a later date, because as you might have noticed while reading this blog that You Tubes have a habit of disappearing from the net for one reason or other.
The coincidence that really tied it all together was that I only really ended up going so I could get the photos of the blue cross on the church, on the way back from the movies, as I had been meaning to show Mike what it looked like at night...and as the movie started, what should appear on the screen a few minutes in???
A blue neon cross (see the trailer for The Grey above...it's in there) for a church in the movie.
Oh, and before I forget ...
One for Trish at -
Synchrosecrets