My blogging buddy King Uke made this great work of art called Walking the Jellyfish.
I love this picture, and it synched in a few ways with a few stories on my blog.
This one for instance, called Animal Dreaming where I was greeted with the these pictures on the front of the TRIBAL cinema front doors when going to see the premier screening of On Borrowed Time.
Not to mention the above trippy pic taken of the director of the movie, David Bradbury being interviewed before the screening by Brisbane journalist Des Partridge.
Very much a David Lynch type photo I thought.
1111...On Borrowed Time?

Walking the Jellyfish also reminded me of this painting by Larry Santana,
which I only found through a real strange series of "coincidences",
The "Bird of Paradise" "Coincidence"

Maybe the key to my blue faces fascination lays somewhere way down deep in my subconscious mind. 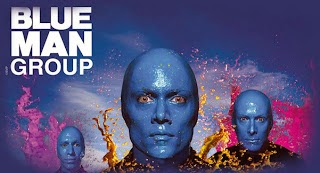 Blue Man Group
I'll just  have to keep an eye out for the key while I'm
walking the jellyfish through the depths of my mind ;- )
Also if you have seen the movie Iron Sky, you'll see a scene where the Nazi woman and the American astronaut go to see a Chaplin movie.
That cinema in real life is the TRIBAL cinema (mentioned above) in Brisbane.
That's where  they shot the scene for Iron Sky.
Above is a picture taken of Blue Blubber Jellyfish in the Brisbane River, by Bruce Cowell.
Cowell???

Blue jellyfish are found around the UK (Cyanea lamarckii). I went to a jelly watch website and the only sighting on the page is for Cornwall where I live.

I went to that link to check it out,and you're right Mike.
These syncs just keep getting weirder.

I love that picture of "Walking on the Jellyfish". There's nothing weirder and more beautiful than real life...