How many syncs can be squeezed out of one movie?
Another blogger from The SYNC Book that I have been following  anonymously (until now that is;-) is Kevin Halcott.
He's just posted this piece on his blog about his band's tune
Moon Goose
and his syncs with Geese and other things, which seem to be syncing with me as well.
He and his band are trying to raise $5000 before June 14th 2012 on Kickstarter to record an album.
The first thing that sprung to mind when I saw the above photo of the band's van was the spiral on the side of it with the words
"Church of Our Lady of Space".

and here for a bigger picture of the flyover;
Who Are You? 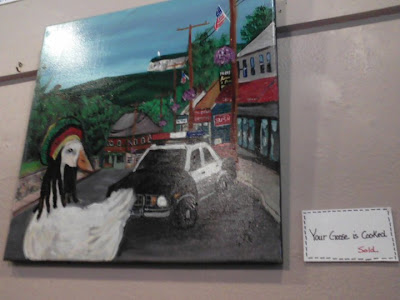 Kevin also tells how he happened to unconsciously sit beneath a painting of a Goose being pulled over, titled Your Goose is Cooked.
Oh...and I should tell you how the movie
The Greatest Show On Earth ties into all this synchro madness.
I watched this movie because it is the only movie that
Emmett Kelley Jr. ever starred in.
But it's a long story.
To find out more you would have to read the syncs in these two posts;
Look At All The Happy Creatures :- (
and
The Greatest Show on Earth...Now Showing 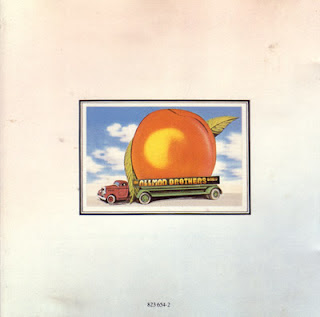 In another sync, to use Kevin's words,"Also tying this together better is that Duane Allman of the Allman Brothers Band said when asked about his stance on Revolution quote "There ain't no revolution, only evolution, but every time I'm in Georgia I 'eat a Peach' for Peace."
- Duane Allman"
I was reading a book called The Little Food Book when I saw this album cover in Kevin's post, and I was reading a chapter titled
Food Miles and the Food Chain. 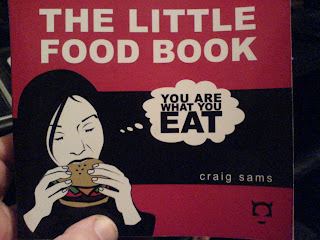 The sentence I had just read was
"More than one-third of all truck traffic is carrying food".
The chapter I had read before that one was
"The (Not-So) Green Revolution".

Kevin also mentions that, "Our drummer mike happens to have a cool statue of a Chinese wise man, one who guards the Peaches of  Immortality".
I have just about that same statue (see photo below).

Also Kevin talks of  the back cover of the band's EP, "we had an even more synchronistic contribution by our artist Travis. This was another alchemical piece, that of the Alchemical Egg, chosen by Travis without any influence from us."

I wrote a post last year about my experience with a 'Cosmic Egg' here;
The Cosmic Egg and the Dragon

Kevin also makes reference to a tarot card with a pink/purple sphere on it, "before our first EP I had an interesting Salvia experience-wherein I actually spoke with the character on my Aquarius Tarot card."
The Crystal Castle, where I bought my Cosmic Egg had a fountain with a pink sphere that swirled around in the water.

Kevin then goes on to say, "The Moon, the Egg, Vitriol, the Rainbow, were all swirling into our narrative quite naturally."
I also witnessed a double rainbow on the way up to the Crystal Castle, which I wrote about, but failed to capture in a photo.
I wrote about my trip to the crystal castle almost a year ago;
Sychronistic Sunday Surprizes
which was the day that I bought the Cosmic Dragon Egg.

Kevin mentions also how, "Venus on the Tree of Life is given the GREEN Sphere known as Victory."
Which reminds me of one of my favorite Brisbane churches that I wrote about here;
Our Lady of Victories Sync
and here;
The Grey / The Grays and the Triad
and where did I see the bird flyover in heart and guitar formation?
At A Day on the Green at the Sirromet Winery when Steve Winwood started singing Higher Love.

Interestingly while searching for the You Tube above for Steve Winwood's Higher Love I found a You Tube of
James Vincent McMorrow singing a cover version of Winwood's song.
I had not heard it until now.

I saw James play live at the Byron Bay Bluesfest this year and wrote about that here;
A Good Friday at Bluesfest

Oh, and James is an Irishman, so I wonder what colour we could associate with him?- )
"In 2011 we bought ourselves a used Church Van.
To honor its previous incarnation we decided to make our van the
"Church of our Lady of Space" shuttle, for fun.
We don't really have a church, but hey if you love Space to your in it."
Funny Kevin should say that because I spent Christmas Eve last year at a Church concert;
"The Church" on Christmas Eve...The Band That Is
"Netzach is given the Planet Venus and the color Green on the Tree of Life.
Netzach translates to Victory, Love, and Eternity among other things."

a movie about that same pilgrimage route.
"The Great Mother, aka Babalon is also known as the Great Sea. The divine feminine energy is universally associated with the element of Water ."
Oddly enough, the movie ends at the beach.

To help them get this album made visit their Kickstarter page;
http://www.kickstarter.com/projects/innis/its-not-night-its-space-and-their-first-lp and pledge a donation.
Cheers.
Posted by Brizdaz (Darren) at 6/03/2012 09:48:00 PM

Totally cool! Geese synchros. Love it. What do geese mean to you?

Geese? Nothing really.It's more the flight formations I see with any kind of bird flocks.
The Mother Goose thing was because I thought I should take a photo of the scene in the movie when I was doing all the screen shots for my other post(and I did),but I thought what for? Then Kevin does a post a day or two after about Moon Goose and Mother Goose...sync bingo!