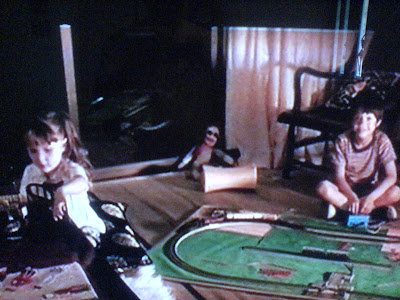 I was watching the movie Dragon: The Bruce Lee Story the other day, for the first time in years.
The first time through the movie I failed to notice this shot above of the actors playing Brandon and Shannon Lee playing in the living room in Hong Kong with a toy train set and roller coaster, while Bruce Lee walks in the front door, after coming home from the film set of Enter the Dragon, where he has just had the premonition of a demon showing him his grave with the date of his death.
This was the scene that really creep-ed me out when I saw it in the nineties, but the top photo has really creep-ed me out this weekend.
Because Bruce was already dead when this film was made, but Brandon would die in a freak accident on the set of The Crow one month before this film would hit the screens.
And Heath Ledger would die while filming The Dark Knight playing the role of the Joker, which looks eerily like that doll leaning up against the glass. 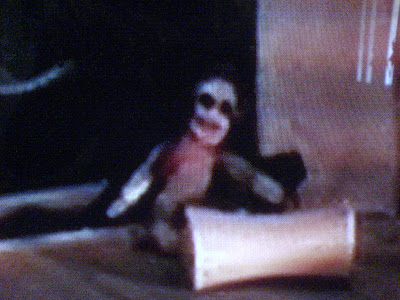 I wrote about The Crow here,
The Crow: Examining the Dark Side of Life
and this was when I got the idea to buy a copy of Dragon on DVD, being the Year of the Dragon 2012 was swiftly approaching, I thought it would be an appropriate time to view it again. 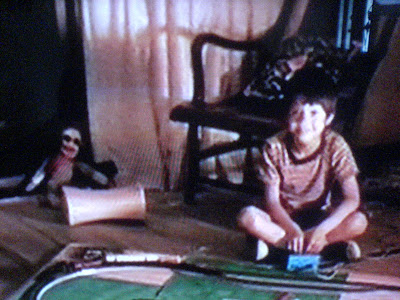 I have never seen these pictures on the net, or anyone discussing this scene before.
Surely I can't be the first person to discover this eerie shot?
I've searched the net, but couldn't find anything about this scene. 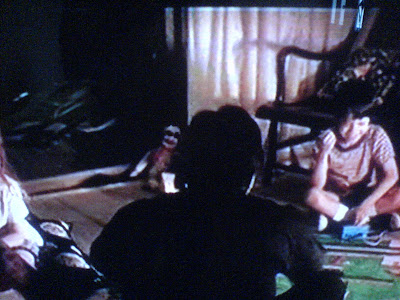 Anyway, I'm working on a post for this movie and thought I would share this before releasing the rest of the post.
But surely this is old news, the film has been out since 1993? 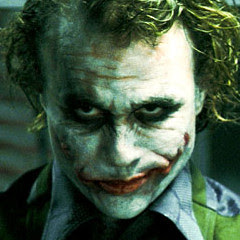 That doll is definitely creepy. I recently picked up an old paperback from 1975: The Life and Tragic Death of Bruce Lee by his wife Linda.

I just read that when Bruce died he was working on a script for a new film called "The Game Of Death".

The movie was based around that book,Mike.I don't know the title but it was mentioned it was based on a book that Linda wrote and she does do the intro on the DVD that I bought showing real family photos of Bruce and Brandon and then the movie rolls with the UNIVERSAL logo coming form Asia to America.
I wouldn't mind reading that book,too,one day.

Thanks Raj.
If you want to do a post on your blog,feel free to use the pictures and info in whatever way you want to use it.
Cheers.

This was the movie to watch to start the Year of the Dragon. You go into it thinking it's another boilerplate biopic, but of course it's another Shadow Battle.

"You're a man now. Almost. You have a right to know everything. You had an older brother. He died in childbirth. The demon took him away from us. The firstborn man-child is very valuable. So when you were born, I name you Sai-Fong, a girl's name. We dress you in dresses so the demon wouldn't know I had another son. I made you speak English, all so we could fool him. But now he knows. And he's coming for you. You must leave tonight."

Bruce Lee's martial arts are a spiritual discipline, fighting the Demon within. It's another Hero's Journey. If he doesn't defeat the Demon, it is carried on to his children. This is a true allegory.

"Kung fu is more than a system of fighting. lt's a system of thought. You must outthink your opponent, whatever form he takes... because some of them will be more than just men. [...] We all have inner demons to fight. We call these demons fear and hatred and anger. lf you don't conquer them, then a life of a hundred years... is a tragedy. lf you do, a life of a single day... can be a triumph."

The journey starts in Assiah/Asia. The woman who owns the Chinese restaurant tells him he can either wash dishes for the rest of his life or make something of himself. He becomes a teacher and is persecuted for Talking About Fight Club. Ancient Chinese Secrets [of the Golden Flower].

Wife is Linda Lee, LL, always dressing in red (he meets her between literal Greek columns of course). The mother objects to the blasphemous union of Spirit and Matter that their marriage represents. She becomes pregnant when Bruce's back breaks--the Star and Moon dichotomy. (Paralleled in Twin Peaks when Lucy becomes pregnant at the same time that Cooper is shot, and similarly in Harry Potter with Tonks' pregnancy.)

Bruce becomes a movie star--he's the hero, so all of the stories are now about him. ("We have not even to risk the adventure alone, for the heroes of all time have gone before us — the labyrinth is thoroughly known.")

But once again, Bruce has to die, while his wife and children survive--at least for a while. ("I just want my kids back.")

Great stuff,Jason.
Thanks for dropping by.
Cheers.

Thanks Jake.
I love your work,it's brilliant stuff.
Cheers.

Talking about "The Matrix" check this sync up of "The Matrix" with the "Who"'s Lifehouse songs,done by Andras Jones
(the guy out of
"Nightmare on Elm Street 4")-

Hit the "Play All" button in the top left hand corner next to Andras' photo to see the clips play one after the other,showing the whole movie.
Better than the sync up of
"Dark Side of the Moon" and
"The Wizard of Oz",in my opinion.
Cheers.