Lotería/Life is a game of chance?

"Lotería is a game of chance, similar to bingo, but using images on a deck of cards instead of plain numbers on ping pong balls.
Every image has a name and an assigned number, but the number is usually ignored.
Each player has at least one tabla, a board with a randomly created 4 x 4 grid of pictures with their corresponding name and number.
Players choose what tabla they want to play with, from a variety of previously created tablas. Each one presents a different selection of images.
Lotería is the Spanish word for lottery.
The deck is composed of a set of 54 different images, each one in a card.
To start the game, the caller (cantor, or singer) randomly selects a card from the deck and announces it to the players by its name, sometimes using a riddle or humorous patter instead of reading the card name.
The players with a matching pictogram on their board mark it off with a chip or other kind of marker (many Mexican people traditionally use small rocks, crown corks or pinto beans as markers).
The first player with four chips in a horizontal, vertical or diagonal row, squared pattern,any other previously specified pattern, or fills the tabla first shouts "¡Lotería!" (Lottery!) or "¡Buenas!" (Good!) and is the winner."" 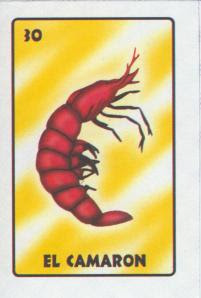 When I was driving from the shot tower that I wrote about in my last post -
Hit Me with Your Best Shot
to Port Arthur, I saw what to me seemed like a familiar sign that I couldn't quite place where I had seen that image before.
At first I drove past the sign, then I decided to double back and get a photo of it and since it was lunch time and I had never seen a cray roll being sold before I decided to grab one, even though $14.80 seemed a bit steep for a roll. 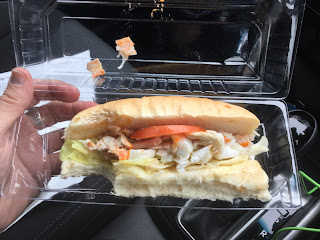 It was OK, but I doubt I would ever fork out $14.80 for another one again.
I had pulled over on a side road, which had a great view of the coast leading down to Port Arthur, to eat my cray roll and look at the photo on my iPod of the cray roll sign and ponder why it seemed so familiar to me.

Camarón que se duerme, se lo lleva la corriente.
The shrimp that slumbers is taken by the tides.
It wasn't until I got home and noticed the matchbox cover-art with the words "El Camaron" on it that I made the connection as to why that sign seemed so familiar to me.
Este mundo es una bola, y nosotros un bolón.
This world is a ball, and we a great mob.
(A pun: bola can mean both "ball, sphere" and "crowd, mob", bolón is a superlative with the latter meaning)
I had no idea what these images on the matchboxes represented and I had originally bought the "El Camaron" matchbox for the art that was on the flip-side of the box - "El Mundo".
It wasn't until I did a bit of Googling that I found out these matchbox images were part of a Mexican game called Lotería. 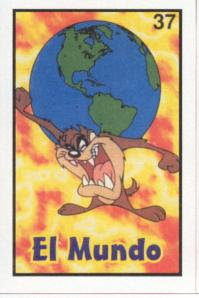 Interestingly, I found an internet site that had various versions of the artworks depicted on these Lotería cards and I couldn't believe that there was an "El Mundo" card with a Tasmanian Devil holding up the world.

The Tao of Pooh
"Taoist tenets. Winnie-the-Pooh himself, for example, personifies the principles of wei wu wei, the Taoist concept of "effortless doing," and pu, the concept of being open to but unburdened by experience, and it is also a metaphor for natural human nature.
In contrast, characters like Owl and Rabbit over-complicate problems, often over-thinking to the point of confusion, and Eeyore pessimistically complains and frets about existence, unable to just be."

Al pasar por el panteón, me encontré un calaverón.
As I passed by the cemetery, I found myself a skull.
I can't believe that I've never heard of this game before and why you hardly ever hear of it in Australia.
Pórtate bien cuatito, si no te lleva el coloradito.
Behave yourself buddy, or the little red one will take you away.
I think this game is a great analogy about reading the signs life throws out to you and where you have a bunch of images, numbers, names, songs, etc as your personal tablas to keep your eyes open for. 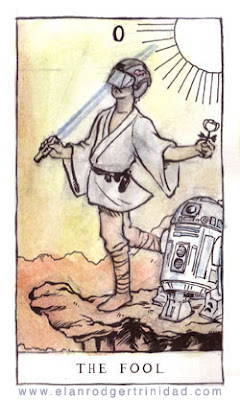 These images remind me of a simple Mexican tarot type system in a way.

I wonder if there is a version of Mexican Radio8Ball called something like Radio8Mundo?
Este mundo es una bola, y nosotros un bolón.
This world is a ball, and we a great mob.
(A pun: bola can mean both "ball, sphere" and "crowd, mob", bolón is a superlative with the latter meaning) 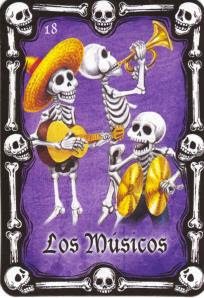