The Pineal Gland gland has been on my mind a lot lately...pardon the pun.
And at Christmas time last year when Trish from Synchrosecrets was doing a post on her blog about Christmas tree ornaments
Ornaments
I decided to take photos of our Christmas tree ornaments while they were out of their storage boxes for the year, and I spotted the little pine cone Christmas tree my mother had bought for us off our Dutch childhood neighbours.
I had just thought it was a cute novelty way of making Christmas trees out of pine cones when mum bought it for us, but now after reading about "The Third Eye" being the Pineal gland and the Pineal gland getting it's name because it resembles a pine cone, pieces of the jig-saw started snapping into place for me. 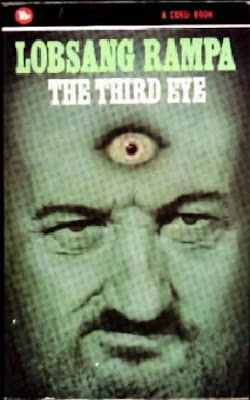 One of the very first novels I ever read (I was around 11 years-old), if not the first, was a book called  The Third Eye.
It was written by a guy named Lobsang Rampa...who ended up being a guy called Cyril Henry Hoskin a West Country plumber.
I read a number of his books, devouring everyone of them eagerly, until I read that he had never been to Tibet and didn't speak Tibetan.
I was crushed because these books felt real to me in some familiar way.
Note: Here's a sync.
I was looking up Lobsang Rampa's details on Wikipedia in the link above and was dumbstruck to find his birthday, 8th April is the same as my father's and also the day my Nana passed away.
I did not know this before writing this post.
I have downloaded a copy of the book and started reading it for nostalgia reasons, more than anything else...but who knows where this my lead, now that I'm older and hopefully wiser?
I even stumbled across this You Tube of Bashar about
DMT and Pineal Gland Activation with what looks like a pine cone in my favourite colour blue.
There's that beautiful shade of blue I love so much over the top of Jim Carey's head in the clip below.
Coincidence?-)
And here's some interesting clips about pine cone symbology.

I must say that I did watch all of the David Wilcock Talk  above and it quickly turns into Sci-Fi after these two segments, with just sprinkles of truth here and there.
The pine cone stuff isn't bad though, which is why I included it.
Posted by Brizdaz (Darren) at 2/20/2012 05:26:00 PM