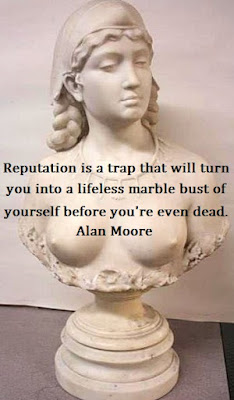 I was reading a copy of Alan Moore's,
'Alan Moore's WRITING FOR COMICS' and he started writing about how comic book writers, or any artists for that matter who become a success are in danger of becoming creatively trapped when they start to worry about the reputation they have earned through their work in the public's eye.

He wrote, "reputation is a trap that will turn you into a lifeless marble bust of yourself before you're even dead".
Alan Moore Talks to Stewart Lee – Books Podcast 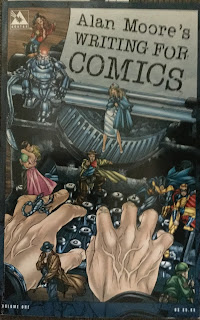 I liked that quote so much of Alan's that I looked in Google Images for a marble bust that I could superimpose that quote on, as I think many a muse is confounded when an artist is too worried about how their work will be judged to listen to her (the artist's fabled muse, the source of ideas). 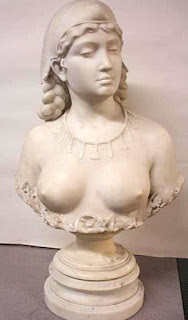 When I stumbled upon the above image I thought how perfect that was ... in more ways than one;-)
Mainly because it was literally a marble "bust" which would put an a"mus(e)"ing twist on Alan's quote and because it could also represent an artist's muse that looks like she is giving the artist the "side-eye" for her idea being judged by the artist who is worrying about their reputation. 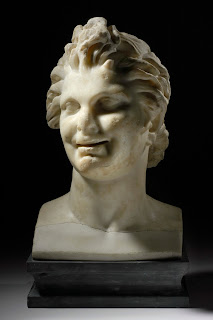 I thought twice about writing this post and wondering if my readers would take it the wrong way leaving my good reputation in tatters, but then I realized that I don't have one anyway, so I just went with my muse on this one to avoid that judging side-eye of hers;-)
What?
Stop "bust"ing my balls Alan.
I thought it was a good idea ... well my muse did at least.