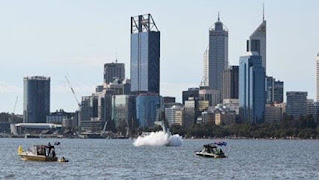 A Plane crashing into Perth's Swan River and killing two people on board ended up calling off the annual Australia Day fireworks display in the city of Perth, while the city of Fremantle had already moved their annual Australia Day fireworks event a further two days ahead of the national date in protest of what the day stood for to them.
Australia Day plane crash: Two dead, Perth Skyworks event cancelled
'An act of betrayal against Australia': Fremantle divided over cancellation of Australia Day festivities
"The port city of Fremantle will effectively become a litmus test for the #changethedate movement when the local council holds its "culturally inclusive" alternative celebration two days after Australia Day.
"What we're doing is coming up with something that is actually more Australian," Fremantle mayor Brad Pettitt told 7.30.
It has been a highly controversial move, criticised by the Federal Government and Fremantle's business community.
Faced with losing out on one of the biggest trading days of the year, businesses have clubbed together to raise the $50,000 needed to salvage the traditional fireworks display on the 26th.
Visitors and residents now have a choice: the fireworks, which are part of a four-day fiesta called "Australia Week", or the council's alternative event "One Day in Freo" on the 28th.
On top of all that, far right groups Reclaim Australia and the United Patriots Front are planning to converge on Fremantle on Australia Day to protest against what they called "an act of betrayal against Australia"."
The sad irony here was that because of the plane crash the Perth fireworks were cancelled, whereas the unofficial fireworks in Fremantle would have taken place on Australia Day (I think).
But here is another Australia Day (Black?) Swan/Swanee event - 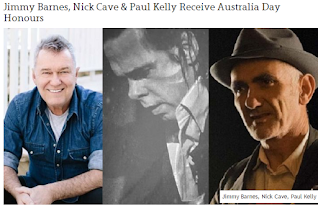 "The holy trinity of legendary Australian musicians have picked up Australia Day honours this year, with Jimmy Barnes, Nick Cave and Paul Kelly all awarded Officer of the General Division of the Order of Australia...
Other musical Australia Day honour recipients include Barnes' brother, John Archibald 'Swanee' Swan "for service to music as a performer, and to the community through charitable organisations", renowned opera/theatre performer Anthony Warlow, Queensland Conservatorium Of Music's director Judith Brown and opera conductor Brian Castles-Onion."
Jimmy Barnes's brother John Archibald 'Swanee' Swan picked up an Australia Day honour the day a plane crashes into the Swan River canceling the Australia Day fireworks.
Doesn't get much more of a black swan event than that, I would say.
And Swanee's last hit was "Blood is Thicker Than Water" (1990).
I saw Nick Cave play Brisbane Australia Day eve, like I wrote in this post -
You Can Never Step on the Same Riverstage Twice ... Especially After 10 O'Clock at Night;-)

And I saw Jimmy play Brisbane in 2014 -
A Day on the Green under the White?

And Paul Kelly I've run into a fair bit in my life -
"... And There's So Much Water So Close to Home" Paul Kelly

It's Paul Kelly that would be God the Father in my Holy Trinity.
As for Swanee, I'm yet to see him play live.
But maybe those days have gone by for me?