Deeper Down the Rabbit Hole? 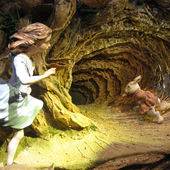 I listened to the latest podcast above at
'Deeper Down the Rabbit Hole' -
Episode 172: Michael Roberts Discusses World In Crisis

"Michael Roberts is an economist who has worked in the City of London for over 30 years.
But he is also a Marxist economist.
He wrote The Great Recession – a Marxist view that had predicted the great financial collapse and slump of 2008-9.
In 2016, he wrote The Long Depression that described the aftermath of the that slump as a new depression like the 1930s.
Now he has co-edited a series of papers that argue that the main cause for regular and recurring recessions and slumps in the major economies of the world can be found in Marx’s law of the tendency of the rate of profit to fall, first developed some 150 years ago.
This new book, The World in Crisis, brings together the work of young Marxist economists around the world to show that this law really does operate in capitalist economies and is the main cause of the instability and eventual downfall."

I then found a talk by Gordon White about his book
'The Chaos Protocols', which was a good companion piece to the world in crisis podcast which was titled -
Episode 138: Gordon White Discusses The Chaos Protocols
"Jason welcomes Gordon White back to the show to discuss his latest book, The Chaos Protocols. Gordon’s latest work takes a serious look at the new normal of the world economy and offers economic and magical strategies, for achieving financial success.
Gordon White runs one of the leading chaos magic blogs and podcasts, Rune Soup.
He has worked nationally and internationally for some of the world’s largest digital and social media companies, including BBC Worldwide, Discovery Channel, and Yelp."

I then listened to episode one of 'Deeper Down the Rabbit Hole' to see where these guys were coming from as far as their beliefs and practices went -
Introduction Deeper Down the Rabbit Hole Episode 1
"Introducing Deeper Down the Rabbit Hole with Andrieh Vitimus, Jason Colwell, Al Anderson introduce themselves.
Hermetism, Chaos Magic, applied spirituality, financial sales technique based on hermetic laws, astral work, spirit evocation, ritual work, and more."
Sounds like an interesting podcast show, so I subscribed in iTunes to add another show to my iPad list of shows to listen to.

I then listened to one more podcast that caught my eye, which was about exorcism, as I have a post I'm writing about the movie and book, 'The Exorcist'.
Episode 140: Father Jason Spadafore Discusses Catholic Exorcism
Update: May 9th, 2017
This is that post -
William Peter Blatty and The Exorcist
That podcast about exorcism was interesting, too, so I'll be working my way through the archives of 'Deeper Down the Rabbit Hole' for the next few weeks now.
It's amazing the rabbit holes you stumble upon on the synchronistic path.
Posted by Brizdaz (Darren) at 5/08/2017 02:30:00 PM