The Carnival Comes to Town 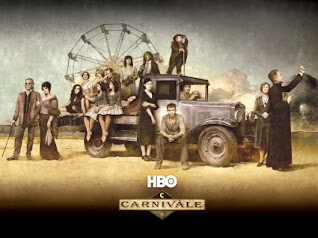 Wednesday August 17th is a public holiday in my hometown of Brisbane.
It's called "Show Day", that's the day the carnival, or
Ekka (Exhibition) shuts Brisbane down, so everyone gets a chance to go to the Show.
I probably won't be going this year, but I went last year and took a whole heap of photos on my travels.
Interestingly, Lisa Coleman (born August 17, 1960) wrote the intro music for the TV show Carnival. I just love all of the archetypal images (to me anyway) that the carnival represents of the collective unconscious.
It's a time to reflect and celebrate life, face your fears, try to look past your own distortions on life and journey through a microcosm that reflects the macrocosm, that is life. 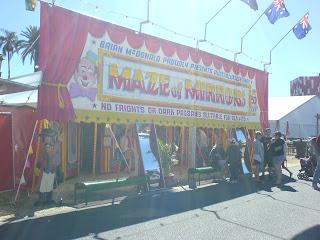 I started watching a HBO television series called Carnival during my holiday break.
I had bought season one a while back when someone mentioned
(I think it was on Christopher Knowles's The Secret Sun blog ) how good the show was on a Jungian type level, which I'm finding out it is.
If you're a fan of Jung, I don't think you will be disappointed viewing this show.
I have only seen up to the show called "Pick a Number", so I can't really comment past that, but I like it so far.
Which reminded me of a few syncs I should share.
I went to the post office on Tuesday morning to pick up my mail.
I had a parcel to collect, so I had to go into the post office and get in a line and wait to be served.
I got bored waiting, so I started flicking though the amusing fridge magnets that were for sale and came across this one, below.
I thought wow!
It's my little "Green frog with the Red Eyes" synchro magnet, but literally, this time.
So, I just had to buy it.
I looked in my wallet, and as I hadn't planned on buying anything at the shops, all I had was a five dollar note on me.
I looked at the price of the magnet, and what do you know?
$4.95!?!
Well, if that's not a sign, what is?
So, I collected my mail and payed for my new magnet.
I had been drafting my post on the computer about my new pillow, that I had bought from Freedom Furniture, and my theory of using your intuition to pick lotto numbers;
Freedom From the "Inside Out"???
and decided to watch another episode of Carnival.
I knew "Pick a Number" was the next in the series and that I was writing a post about lotto numbers, so that wasn't such a big deal to me.
What was though is that right at the end of that episode a priest by the name of Brother Justin has lost his faith after his church is burned down by crooks, so he takes to the bottle and roaming the railways with the homeless (wandering in the wilderness), but a radio announcer  who was looking for stories among the hobos broadcasts Brother Justin's tragic  story across the airwaves, saying constantly "Where are you Brother Justin?"as he is seen walking aimlessly past"Perry's" garage.
The mechanic inside is too busy listening to the broadcast to notice the preacher walking by.
Now, while this is happening on the TV screen, my son is discussing with his mother the picture my son's friend "Justin" is going to do, to put on a memorial plaque which is going on my father-in-law's  grave.
Justin is a really good artist who happens to draw stuff  for
Marvel Comics.
If that wasn't a coincidence enough, there is a scene at the end where the little dwarf is looking into a window and see's a dead woman looking back at him though a window to the tune of
I Only Have Eyes For You!?
Not only that, but the parcel I was picking up at the post office was The Living End's new CD which I had ordered over the internet, because you get a signed copy, plus the bonus comic book
The Secret of Rock' N' Roll, which was a limited time offer. 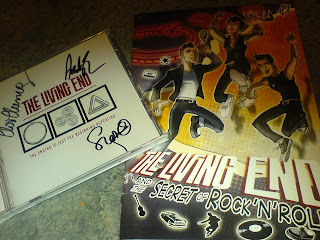 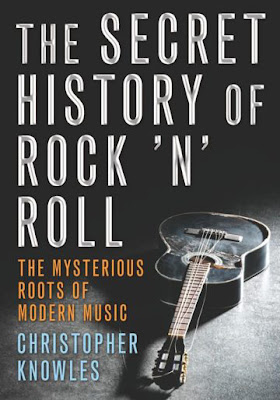 The rabbit hole just keeps getting deeper as I read more.
The Living End's main singer is a guy named
Christopher John Cheney.
On 22 September 2001 (one day before my birthday), he was involved in a serious car crash when he was hit in his 1977 (the year of my OBE) Holden Kingswood by a car speeding in the wrong lane at 100 km/h.
The impact of the collision ripped off the side of his vehicle, forced it off the road on a sharp turn along the Great Ocean Road in Victoria and down an embankment.
His right leg was crushed and required a rod and three pins to hold it together.
He was confined to bed and later a walking stick (the dwarf in Carnival uses a walking stick all the time in the show) for the next six months.
He was unable to play the guitar until he was rehabilitated.
He is the guitarist, main songwriter and lead vocalist in the Australian rock band.
His trademark guitar is a Gretsch White Falcon and he uses mainly distortion and modulation effects.
Chris currently has his own signature series Gretsch guitars.
The Living End started out in 1992 as The Runaway Boys, as a tribute to the Stray Cats, whose "Runaway Boys" album is Cheney's favourite of all time.
It was formed by Cheney and childhood friend Scott Owen.
They mostly covered songs by the Stray Cats and other '50s tracks.
In 1994, the pair started to write their own material.
The band went through a number of drummers before settling on Travis Dempsey.
At that point they became known as The Living End.
Cheney appears in the supergroup The Wrights who put out a re-recorded version of Stevie Wright's epic "Evie". .  Also appearing in the supergroup were members of Grinspoon, Jet, Spiderbait and You Am I
Remember the song  "Evie" (It is reportedly the only 11-minute song to chart at #1 anywhere in the world) as I will be coming back to it in a future post on the movie Red Dog as it is the opening song in the movie.
In August 2009, Cheney took part in a series of concerts around Australia along with Tim Rogers, Phil Jamieson and Josh Pyke to celebrate The Beatles's White Album, performing the album in its entirety.
In 2010, Chris and his wife Emma, along with his manager
Rae Harvey & Woody Annison opened their own recording studio in Melbourne called
RED DOOR SOUNDS.
And what was the name of the  studio I bought my cups from at the Writers festival???
Follow Your He(art)!
Red Door Studio
444 Fernleigh Road

Fernleigh
NSW 2479
Red Door Studio
This music video above was produced for White Noise, featuring
The Living End playing on a car park rooftop in
Brisbane (my hometown).
"White Noise" is the first single from The Living End's fifth studio album, White Noise.
Released on 5 July 2008 (my youngest son's birthday), after the "White Noise" track was the most added song on Australian radio in the weeks previous, it went on to top the Australian Airplay Chart.
The single has now been accredited platinum status in Australia.
The song also won the 2009 Song of the Year at the APRA Awards.
The Ending Is Just the Beginning Repeating (album)
Also in  the mail,that the The Living End CD came in, was my youngest son's school formal photos which we had been waiting for quite some time to arrive.
Here is the "Red Back Spider" envelope that it came in, pictured below.
And what kept James Redfield from attending
The Byron Bay Writers Festival?
A spider bite!?!
WARNING: THE MOVIE TRAILER ABOVE CONTAINS
BAD LANGUAGE, DO NOT VIEW IF EASILY OFFENDED.
(Sorry, but it was the only trailer of the movie I could find)
The movie trailer above is for a movie called Noise, starring
Brendan Cowell and Katie Wall.
Two of the authors I met at the Byron Bay Writers Festival.
Katie's book I Say Tomato I have since read (It's quite good I thought).
Brendan's book How It Feels, I've purchased, but have yet to read.
Brendan is a lifelong supporter of the
Cronulla Sharks Rugby League club, as am I.
Katie Wall grew up in Byron Bay. 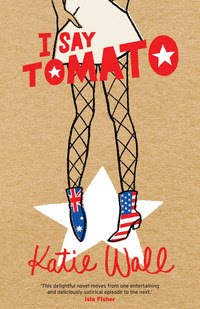