Sylvester and My Life with Feathers 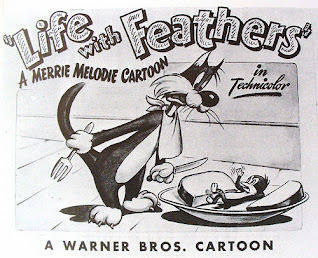 I was thinking about my old cat Sylvester and how I had named him after the WB cartoon cat of the same name, and then I started to wonder if the name meant anything in particular.
And I came across this when I did a search for the name's meaning;
Sylvester
`Sylvester` may refer to: In some countries `Sylvester`
(or `Silvester`) is the name used to refer to December 31st
(New Year's Eve).
As a name, it means `wooded`, from the root `Sylvania` meaning `forest land` in Latin.

Which I found quite amusing, because if you've read this post about my cat -
Gabriel (Peter)
you'll know I couldn't bury him in my backyard, so I buried him in the forest.

Life With Feathers
In it he chases a blue coloured bird instead of the yellow coloured Tweetie.
The cartoon centers on a heartbroken lovebird's decision to
commit suicide.
He recruits a black cat (Sylvester) to eat him, but the suspicious cat thinks the bird is poison and refuses.
If you have read my post about the
blue bird that flew into my window
(suicide attempt maybe?-) you would see that this is all getting a bit weird.
The Bird that Flew into the Window
Sylvester's trademark exclamation is "Sufferin' succotash!", which is said to be a minced oath of "Suffering Savior".
I also found this cartoon called Lighthouse Mouse recommended to me after Life With Feathers came to an end.
Lighthouse Mouse
The synopsis is; It is 11 o’clock at night at a lighthouse on a small island, and the clock's pendulum is intermittently deflecting the light from the beacon into a mouse-hole downstairs, keeping the resident mouse wide awake.
The rodent crawls out of bed, climbs the steps to the beacon, and yanks the plug out of the outlet to turn it off.
Consequently, a cargo carrier named Australia crashes into the rocks on the shore of the island, causing several wooden crates to spill overboard.
Hippety Hopper, a baby kangaroo, is inside one of the fallen crates, and after the ship departs, he hops off within the crate until it breaks apart against the rocks, setting him free.
Most of the cartoon is then about Sylvester chasing the mouse and kangaroo around the lighthouse trying to prevent them from turning the light off.
In the final scene, the light-keeper is sleeping soundly, as are Hippety and the mouse, while Sylvester is serving as the beacon, hooked up to a battery with the light projecting through his eyes.
Which ties into this post about one of my most favourite landmarks in Australia, The Cape Byron lighthouse -
Guiding Higher Light
And oddly enough, when I was looking up sites on Mel Blanc (the voice of Sylvester).
I came across this strange piece of information about him;"Just as he gave those characters life, in a sense, they returned life to him.
In 1961, following a near-fatal car accident, a doctor, acting on sudden inspiration, managed to cajole him out of a two-week coma by addressing him as Bugs Bunny and Porky Pig.
When Blanc did wake from that coma, he found over
15,000 get well cards waiting for him, from all over the world.
Some, in fact, had managed to reach him with no more address than "Bugs Bunny, Hollywood, USA.""
And if you have read the post below this one, called,
Film: A Thin Skin or Membrane
then you'll see that we are really starting to go down some
rabbit holes here.
In the following posts I'll explore more syncs with feathers that I've had quite recently.
Stay tuned because ...
That's not all, folks;-)
Posted by Brizdaz (Darren) at 8/01/2011 12:43:00 AM