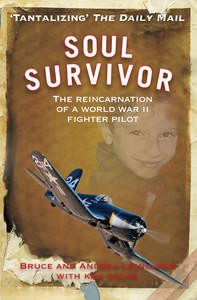 Another book I have started reading and find quite fascinating is a book I picked up at the Abraxas bookstore called, Soul Survivor.
Here's the blurb about it from Penguin Books Australia;
Soul Survivor: The Reincarnation of a World War II Fighter Pilot

Author: Andrea Leininger
Author: Bruce Leininger
'REMARKABLE EVENTS'
THE DAILY MIRROR
James Leininger was just two years old when he began having disturbing nightmares that would not stop.
He screamed out in the night 'Plane of fire!
Little man can't get out!'
While nightmares are common among children, what happened next shocked those around him . . .
James began to reveal details of planes and war tragedies that no two-year-old boy could know.
So began his parents' quest, which led them to the unbelievable truth that their son was reliving the past life of World War II fighter pilot James Huston.
Their touching story is one that will challenge sceptics and confirm the beliefs of those who already believe in life after death.
THE NEW YORK TIMES BESTSELLER
I'm still reading through it, so I can't really comment too much about it at this stage, but I do find it interesting, to say the least.