Freedom From The "Inside Out"???

Another article from the edition of the Inside Out magazine that I've been raving on about in recent posts on this blog lately got me to thinking how close I have been to hitting first prize in the lotto over the last decade or two, but have just fallen at the last hurdle (number).
The above photo is the new feather filled pillow I bought from my work's competitors.
How appropriate is it that they go by the trading name of
"Freedom"?
I saw it advertised in the "Green Frog with the Red Eyes" edition of Inside Out magazine and thought I need a new cushion for my desk chair and how appropriate?
The number 2 prevented my exit from the company I work for, more than a decade ago ... and that was my house number at the time:-(
I had formed a lotto syndicate at work at the time with ten co-workers for the old Thursday night lotto draw.
We only played one system 9 ... 9 numbers that I intuitively picked, (which is 9 numbers combined in every possible winning combination), five times before we hit 5 winning numbers out of 6 (number 2 was the number we didn't have ... which was [as you can see in the photo of the cheque header] the number of the house I was renting with my wife at the time).
The 10 of us got $820 each, instead of the $300 000 each we would have got for one more number.
We put it behind us, and kept trying and of course, more co-workers wanted in (everybody loves a winner, don't they?), so we formed a 20 person syndicate and about one year later, and we had another 5 numbers out of 6 (I don't know what the numbers where for that one, and which number cost us the big one), and another cheque for $3888.20.
But among 20 co-workers, that was less than $200 each:-(
I got sick of running the syndicate and chasing co-workers for money, and since nobody else wanted to organize it, it disbanded and I just went to playing my own set of registered numbers on a standard 12 games sheet.
Numbers that I had picked myself.
I had played these for about 6 months, and I was thinking of giving it up ... and then ... 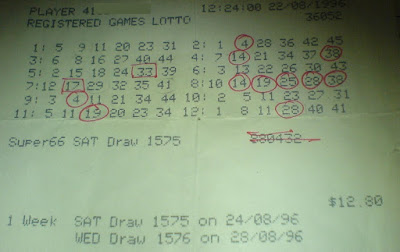 ... 5 winning numbers out of 6 again ... but this time the prize was all mine, no sharing (except with the wife, that is ... but she won $1800 on a random quick-pic ... one number short again) and as you can see from the coupon it was number 4 this time that cost me about
$1 000 000.
The newsagents printed the winning dividend on the back of my coupon and gave it back, because I still had a live game with those numbers for the Wednesday night draw ... and it didn't win, so I got to keep the actual coupon.
Now, this ad in the magazine for the number 2 pillow and the above book called How to Pick Your Personal Lottery Numbers (notice how it doesn't say "winning numbers" in the title?-) by Dr Robert Hieronimus, which I happen to be half way through reading
(it's crap, by the way), got me to thinking, "why can't we just pick them with our intuition???".
A lady in my work syndicate whose husband dreamed the first four winning numbers in the right order for an upcoming lotto draw and I watched them come out in that order with my own eyes, so I know he was absolutely right with his precognitive dream.
I have never witnessed anything like it in my life, it's kind of spooky.
But I wished I could do it.
Then I thought why not ... why can't we tap into the collective unconscious and pick the winning numbers.
If you can dream them, then why can't just receive them in a meditative state of mind? 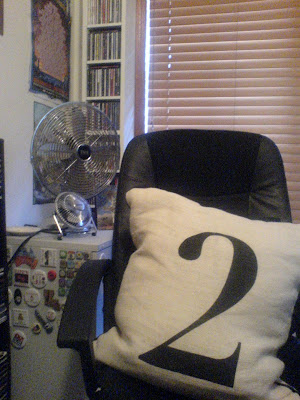 So, I thought why not try playing little mind games trying to use intuition and tap the subconscious when picking lotto numbers ... it can't be any worse than letting a machine pick them for you.
So the feather-filled pillow is a symbol that sits on my chair to challenge me to meditate on the winning numbers and play it like a game where the outcome is not about financial gain, but just as a game to play to see how close I can get to the winning numbers with my minimum entry game.
I encourage everyone to try using their intuition, rather than letting some mindless machine pick them.
After all, like me, most times we are our own prisoner.
Freedom is there ... we just have to be able to let ourselves walk out of the open cage that our mind keeps telling us is locked shut. 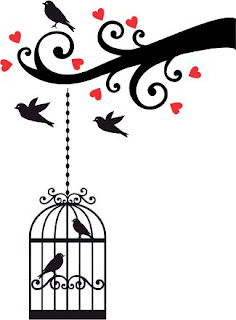 Subliminal CDs like the one below I'm finding are pretty good, too.
Whether it's just a placebo effect, or not I don't know.
But I have been winning way more minor prizes picking my own numbers after listening to this CD than I would playing quick-pics.
I may not ever win the big one this way, but I am sure going to give it a shot.
At the same time I won't be putting any pressure on myself to win it.
It will just be a fun game to play like guessing the outcome of Zenner cards (not that I've ever tried Zenner cards).
Sometimes you just have to let yourself go ;- )
Follow your own intuition ... what have you got to lose, anyway???
Posted by Brizdaz (Darren) at 8/16/2011 04:44:00 PM