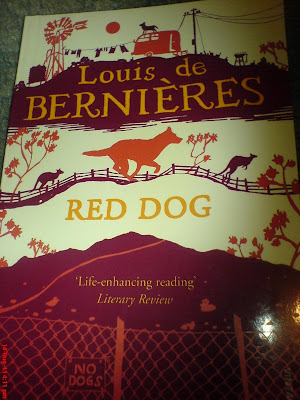 On the Friday, Louis de Bernieres did a talk with the festival director Candida Baker called, All Over the World about the broad reach that his books have on readers all over the world.
I've never read any of his books before, and I remember seeing Captain Corelli's Mandolin on DVD years ago, but it didn't take my fancy.
So I went to hear another talk about first book writers, which I wrote about here;
Look Both Ways
Both talks were on  pretty much at the same time, and when the talk I went to hear was over, I went to the bookshop tent to look over the books and saw that Louis was in the signing tent with not many people around him, so I went to the part in the book-tent that sold his books and saw that he was the author of Red Dog.
I thought no way!
That's an Australian movie, surely he didn't write that one?
I picked up the illustrated version of his book and flicked through it trying to decide whether I should buy the book or not, and the first picture saw was of an owl.
The book had my attention, but it was just a picture of an owl, which in itself is no big deal, because the owl is not really a big sign for me. 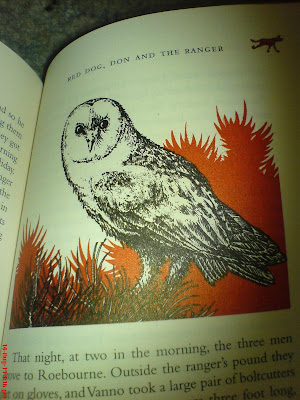 My first thought was Mike Clellend might find this interesting, because he is obsessed with owls, but it's not a Sacred Kingfisher.
The Bird that Flew into the Window
If I saw one of those in there I would probably buy it.
I flicked back toward the front of the book and what do I find?
A kingfisher!?
SOLD!
I hurried outside to see if Louis was still there and he was, with not too many people there yet.
So I asked him to sign it and then had a little chat.
He was out promoting the movie of the book
(which had just opened in Australia that weekend), as well as his books, so it just happened to "coincide" with the Writers festival.
How convenient for us all??? 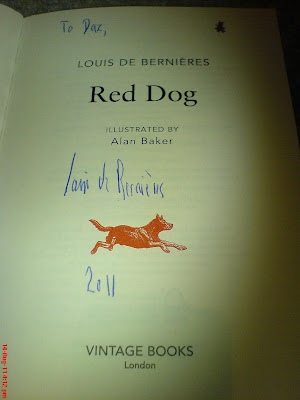 Considering this is a book that I would probably not have bought under "normal" circumstances, I could not believe all the coincidences that keep leaping out between important synchros and symbols in my life over the past year and this story, as I read through the book last night.
SPOILER ALERT:
John happens to be the main character in the book
(apart from Red Dog, that is), he gets killed in a motorbike accident halfway through the book when he gets thrown onto a rock and gets his chest smashed in.
He dies suddenly and unexpectedly, nobody sees it coming, not even the reader.
John was my father-in law's name, he died suddenly and unexpectedly from a heart attack which no one saw coming either.
The Tree has also been a synchronicity for me involving John's death, as I saw that movie the weekend before his death.

In the book there is a picture of a tree and underneath is written
Red Dog Meets John and the chapter starts off with the words
"I don't think he is coming back...".
Although that sentence involves Red Dog's wanderings, not John's death ... that comes later in the book.
I ruined two pairs of shoes while pretty much on the same stretch of beach where I bought this book.
The first was at the Bluesfest, when I saw Bob Dylan
It cost me a pair of shoes.
When I tried to pull my muddy shoes off, without undoing the laces, I ripped the sole off one, and ended up throwing them in the bin.
A sole (soul) was gone.
At the Writers festival the soles (souls) were coming away from my shoes and I got so much sand in them from my walk on the beach I had almost thought about throwing them out, as well.
The Path to the Shore (Byron Bay)
Sole (soul ) survivor???
Soul Survivor
Then there is this picture of what looks like a black and white cat (although it is meant to be a red cat) very similar to what my cat Sylvester looked like.
Sylvester and My Life with Feathers
The book also ends on page 115 with three birds in flight.
My life number is 7 (1+1+5=7) and my wife's birthday is the 11th May (11/5) John's birthday was the 15th Feb.
The Sacred Kingfisher hit my window Sunday Feb 13th, and Valentines Day was Monday, Feb 14th, with John's birthday being Tuesday Feb 15th.
I also bought the magnetic bookmark pictured above at the same time I purchased the Red Dog book, because it was right near the register and I felt it was a fair depiction of an image of intuition to me.
When I got it home I couldn't help thinking the top of the wave looked like a white feather.
But all the above just has to be coincidence ... right?
Or just the delusions of an overactive imagination you say?
P.S.
In Australia a Red Dog is also known as a "Bluey" and what is
my favourtie colour???
How Inside Out is that?
Spiritually Blue