The Year of the Earth Dog and a Bon-Fire? 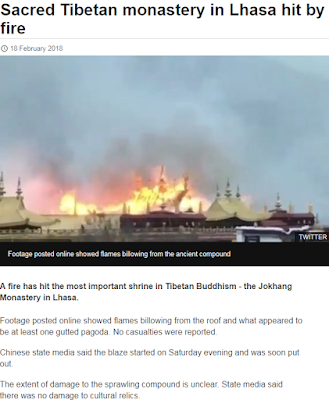 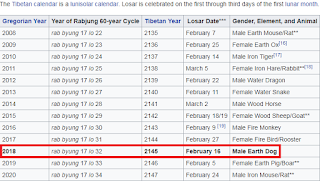 "Losar (Tibetan: ལོ་གསར་, Wylie: lo-gsar; "new year") is a festival in Tibetan Buddhism.
The holiday is celebrated on various dates depending on location (Tibet, Nepal and Bhutan) and tradition.
The holiday is a new year's festival, celebrated on the first day of the lunisolar Tibetan calendar, which corresponds to a date in February or March in the Gregorian calendar.
In 2018, the new year commenced on the 16th of February and celebrations will run until the 18th of the same month.
It also commenced the Year of the Male Earth Dog." 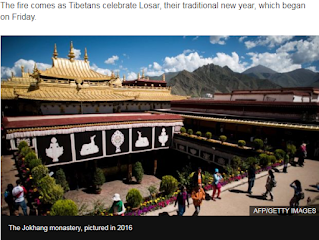 "Losar predates the arrival of Buddhism in Tibet and has its roots in a winter incense-burning custom of the Bon religion." 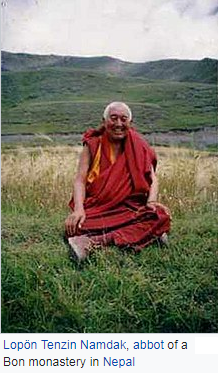 "The 14th Dalai Lama frames the importance of consulting the Nechung Oracle for Losar:
For hundreds of years now, it has been traditional for the Dalai Lama, and the Government, to consult Nechung during the New Year festivals.

Tenzin Wangyal frames his experience of Tibetan cultural practice of Losar in relation to elemental celebrations and offerings to Nāga (Tibetan: Klu):
During Losar, the Tibetan celebration of the new year, we did not drink champagne to celebrate. Instead, we went to the local spring to perform a ritual of gratitude.
We made offerings to the nagas, the water spirits who activated the water element in the area.
We made smoke offerings to the local spirits associated with the natural world around us.
Beliefs and behaviors like ours evolved long ago and are often seen as primitive in the West.
But they are not only projections of human fears onto the natural world, as some anthropologists and historians suggest.
Our way of relating to the elements originated in the direct experiences by our sages and common people of the sacred nature of the external and internal elements.
We call these elements earth, water, fire, air, and space." 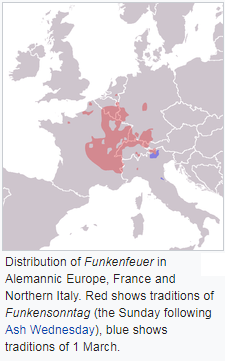 "A bonfire is a large but controlled outdoor fire, used either for informal disposal of burnable waste material or as part of a celebration." 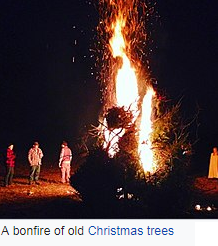 The Year of the Earth Dog is really off to an eerie start in China/Tibet with fire elements crashing the party right from the get-go.