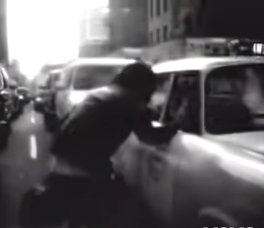 .
Warning: Indigenous Australians are advised that this post includes images and names of people now deceased

"A Melbourne taxi driver has been accused of being racist for refusing to pick up award-winning Indigenous singer Geoffrey Gurrumul Yunupingu.
The blind performer had finished a concert at the Palais Theatre in St Kilda last night and was guided to a taxi waiting at the side stage door.
Mr Yunupingu's manager, Mark Grose, says the driver looked at the singer, said "no", then locked his car and drove off.
"I'm not kidding. I was absolutely gobsmacked," Mr Grose told ABC local radio.
"He refused to take the fare for whatever reason. It's a mystery, but there's only one reason I can think of.

Audio: Mark Grose explains what happened with the taxi (ABC News)
"Well he just looked at the colour of his skin and said 'that's it, I'm not taking him'. There's no other explanation."
Mr Grose says he was doubly shocked when he realised the driver was either Indian or Pakistani.
He says it is not the first time this type of thing has happened ".
I wrote about seeing Gurrumul play at Byron Bay Bluesfest here -
”But Dylan’s Not Dead” ”Oh ... Isn’t He?”
Posted by Brizdaz (Darren) at 12/05/2012 07:36:00 PM