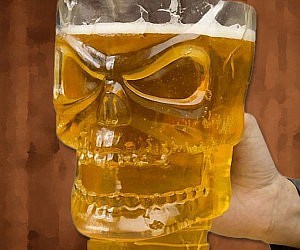 "Despite different spellings, scull and skull can express the same meaning when – as verbs – they take a beer or two as their grammatical object.

They are variants of skol, the Scandinavian toast used by English-speaking drinkers everywhere who indulge in skolling.
Only in Australia does skol become a transitive verb (as in skol a beer) with its pronunciation adjusted so that it sounds more like scull/skull, though neither of those is related to the meaning of skol.
The use of scull is explained by reference to student drinking rituals that challenge participants to down a bottle or can of beer in one draught, like the long stroke used in sculling a boat.
A different explanation is given by the Minnesota Vikings, an American football team, which uses skol as its battle cry – supposedly like their eponymous heroes – to signify they hope to drink from the skulls of their victims at the end of the day.
But the most likely source can be found in a Scottish homonym of skull (“cranium”) that refers to a drinking bowl, which found its way into early modern English.
Since the Scandinavian skol also meant “a drinking bowl”
(= skål in modern Swedish), there’s no need to invoke badass drinking customs to account for the spelling.
But then, why waste a good story?"
TAXIS: A Divinely Ordained Sense of Order That Would Infuse the World With Light, Harmony and Holiness? 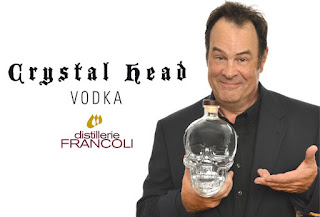 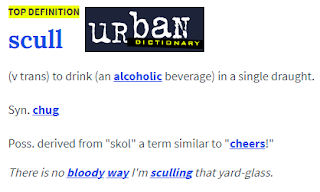 And if you are travelling in Australia and you would like a vodka, just say to the bar-person, "Give me Head, please".
And make sure you have taken out medical insurance before departing for Australia, if you are going to take my advice on that last one, because you may need it:-)
And my advice would be not to skull a bottle of Head. 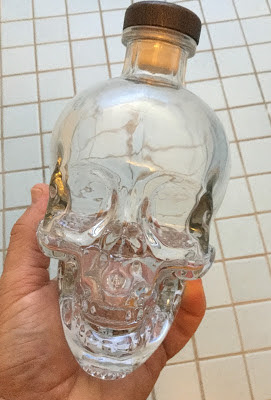