Continued on from -
Year of the Synchromystic Dragon
(Part Three)
Before I get started on part 4 of this movie post, I just wanted to say "key" symbols have been hitting my consciousness from every direction lately.
I've just started reading Whitley Strieber's book The Key and while at the Woodford Folkfest I was attracted to buying an antique looking Tibetan lock and key. 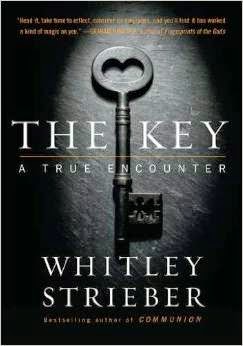 So, the key symbol on the menu of the Dragon DVD I found to be quite intriguing to me personally.
Then researching The Green Hornet TV show I found that Gold Key comics had the rights to publish the TV show into comic book form. 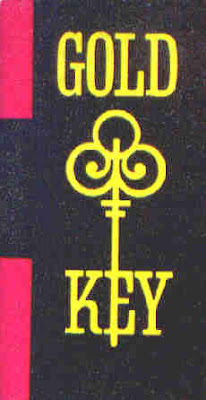 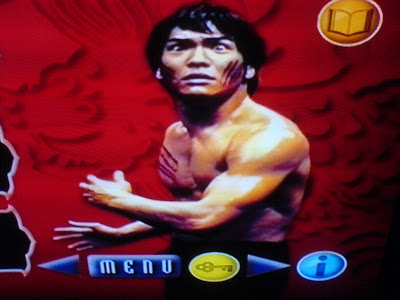 So, maybe the key symbol in the DVD menu is a reference to the comic books Bruce appeared in as Kato?
Anyway, back to part 4 of the movie post.
The last full movie Bruce would make was Enter the Dragon for Warner Bros.Pictures.
The last part of Dragon focuses on the filming of Enter the Dragon and Bruce's nightmare visions of his battles with the demon.
The above photo is the actor Jason Scott Lee wearing Bruce's real leather jacket, which was lent to the makers of Dragon by Bruce's wife Linda.
It reminds me of Micheal Jackson's red leather jacket from the Thriller days. 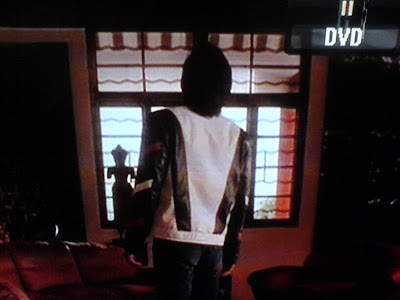 Which reminds me of Micheal's song Man in the Mirror, as well as the Mirror scene in Enter the Dragon, where Bruce is the man in the mirror.
Rob Cohen did produce The Wiz, so there is a connection between Jackson, Cohen and the Lee's.
According to Rob Cohen, on the 32nd (Bruce died at 32 years of age) day of filming Enter the Dragon, a monsoon hit the set of the film.
There are rumours that the winds that day blew away Bruce's protective mirrors letting the demon in to Bruce's world...or so Bruce thought.
How true this is I don't know?
Rob Cohen admits in the commentary on the DVD that Brandon's death soon after this film was completed really spooked him, because he made up the final fight scene between Bruce and the demon with the demon going after Brandon, who can be seen behind Bruce in the cemetery, in the very top photo in this post.
The demon in the movie Dragon wasn't the demon Bruce was seeing in his visions.
This demon is the invention of Rob's, so he could pit Bruce in battle with this demon on screen.
Rob said he used a Siberian Bear Hunter's mask in the photo above, but I think he was really trying to combine the characters of Darth Vader and Pinhead from the Hell-raiser films to give his demon a more main-stream cinema approach to a demonic entity?-) 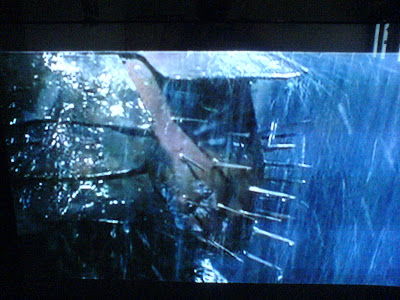 What used to spook me when I first saw this film, was where the demon grabs Bruce and shows him his headstone. 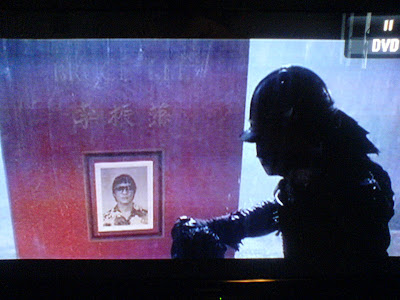 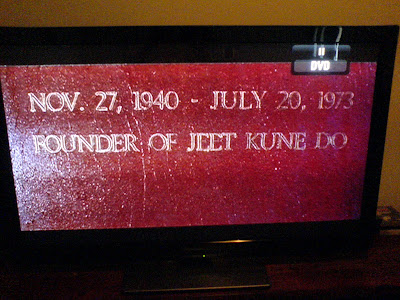 Rob says they reproduced Bruce's actual grave for this scene above.
The photo on the grave must have since been changed, because if you Google up an image of Bruce's current headstone, he isn't wearing the sunglasses.
In fact, it is a totally different photo altogether.
When I saw the shot above I couldn't help but think the demon is showing Bruce not only his grave but the Monolith from 2001.
I couldn't help thinking of this same demon showing someone like Douglas Adams (author of The Hitch-Hikers Guide to the Galaxy) his grave, since Adams died tragically young in the year 2001.

"In the film 2001: A Space Odyssey, one of the opening scenes show a group of cavemen shrieking and yelling at a black stone monolith that also appears at the end of the film, appearing to a man on his deathbed.
When I first saw this film, at the time I never looked for any deeper meaning behind symbols in popular media, and I found the appearance of the monolith to be strange and out of place. Later I came to understand that the monoliths appear just before a great revelation to or jump in the evolution of mankind.


The movie was made in 1968. On a quick side note, a monolith showed up in a park in Seattle on New Year’s Day 2001, only to mysteriously disappear three days later.


Years before this mysterious event (1992), the Millennium Hilton Hotel was opened.
It faced adjacent to the WTC, and anyone who followed synchromysticism at the time would be inclined to think it would bear witness to a revelation in the year 2001.


The year 2001 will forever be remembered for the attacks of 911.
The television brought us horrible images of falling towers and people running from debris."
Taken from Synchromysticism. 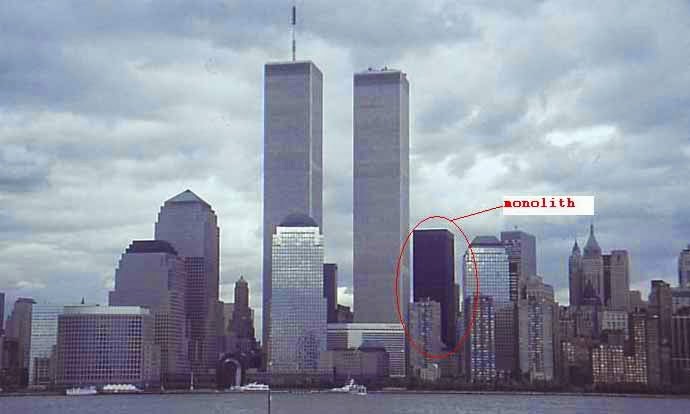 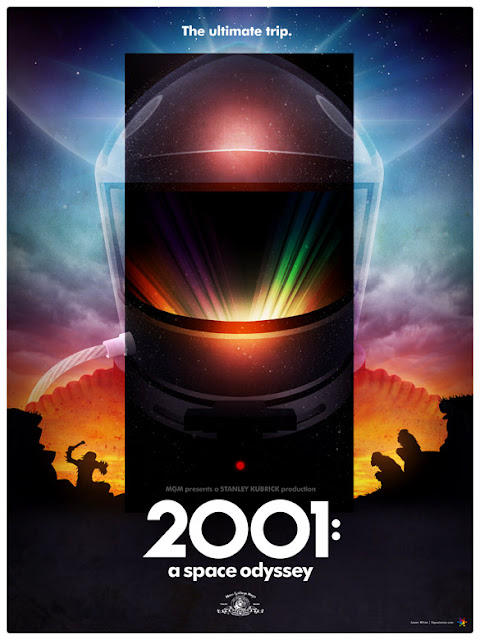 It's pretty well agreed upon that Kubrick made the Monolith the dimensions of the cinema screens of 1968 that the film would be shown on.
That's why the film starts with the music playing for ages, while the audience stare at a black screen...or Monolith?
Just a thought to all the Synchromystics out there, that maybe the cinema screen is the modern scrying tool after all?- )
Here's one for the conspiracy theorists out there.
In the above scene Rob explains that they had to use tempered glass, and as the stunt man is about to hit the glass they had to blow it with little explosive squibs to make it look like the stunt-man's impact breaks the glass.
Hmm...where have I heard something like that before?
Rob also says they had to hide the camera in a mirrored box, so it wouldn't be picked up in the other mirrors as they were filming.
On the DVD scene selection chapter 32 is titled "Game of Death" this is the final battle between Bruce and the demon.
Bruce would die at 32 and in this chapter he is shown the date of his death.
He ends up defeating the demon with his favorite weapon "nunchucks".
Which interestingly when you go to Wikipedia;
http://en.wikipedia.org/wiki/Nunchaku
We are told that,"nunchaku were originally a short Southeast Asian flail used to thresh rice or soybeans (that is, separate the grain from the husk).
It is possible that it was developed in response to the moratorium on edged weaponry under the Satsuma daimyo after invading Okinawa in the 17th century, and that the weapon was most likely conceived and used exclusively for that end, as the configuration of actual flails and bits are unwieldy for use as a weapon.
Also, peasant farmers were forbidden conventional weaponry such as arrows or blades so they improvised using only what they had available say, farm tools such as the sickle."
Sickle?
So, the grim reaper is seemingly defeated by his own weapon in a roundabout way.

In this scene Rob says they had two days to shoot in this part of Hong Kong, but their lives were threatened by the Triads, so they had to shot around the clock and then leave as fast as they could. 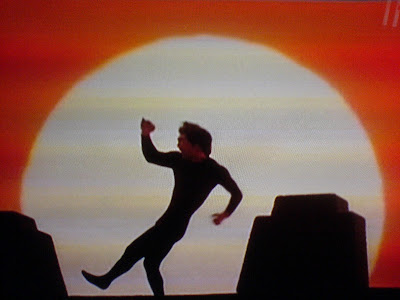 The film finishes with Bruce climbing the "Stairway to Heaven"
on the set of "Enter the Dragon" and then shadow boxing with in the sun.
And with this dedication to Brandon;

DEDICATED TO THE MEMORY OF
BRANDON BRUCE LEE.
FEB 1ST 1965 - MARCH 31ST 1993
"The key to immortality is first living a life worth remembering"
who would die on the set of The Crow in a freak accident, after this film was all put together and ready for cinema release.
And since I mentioned the key symbol at the top of this post, along with mention of Whitley Strieber's book The Key.
I thought it was interesting that Mike Clelland should direct me through his blog to this link:
An Interview with Whitley Strieber
Where Whitley talks about Bruce Lee's encounter an nonhuman presence in a bookshop on page 2 of the above document.
Posted by Brizdaz (Darren) at 1/30/2012 12:22:00 AM

Respect for your Synchromystic Dragon posts. Great dedication to write such detail.

Wasn't aware that "monoliths appear just before a great revelation to or jump in the evolution of mankind" must find out more about this.