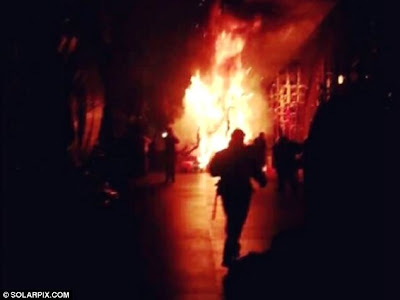 "An aspiring carnival Queen has been severely burned after fireworks set her costume on fire during a parade in Santa Cruz de Tenerife.
Saida Maria Prieto, 25, was just minutes away from going on stage when the horrific accident happened.
It is thought her costume turned into a giant fireball after coming into contact with pyrotechnics on another competitor's outfit.
Miss Prieto was rushed to hospital suffering first and second degree burns to 40 percent of her body.Maxim Huerta, presenter of the show told Spanish website hechosdehoy the situation was 'terrifying' and said the competitor was desperately trying to 'escape the suit.'
Four other people were also treated for burns during the incident, including the designers who helped to extinguish the fire and free Miss Prieto from her burning costume."
Carnival Queen engulfed in giant fireball as her lavish costume goes up in flames minutes before she goes on stage in Tenerife

"Five crew members have died after a lifeboat they were in fell from a cruise ship docked in the port of Santa Cruz de la Palma in the Canary Islands.
The accident happened on the Majesty, operated by UK-based Thomson Cruises, during a routine safety drill.
Those killed include three Indonesians, a Filipino and a Ghanaian. Three people were also hurt as the boat reportedly fell more than 20m into the sea.
The MS Thomson Majesty is believed to sail under a Maltese flag.
An estimated 1,400 people were on board the cruise ship when the accident occurred around 12:00 GMT on Sunday."
Five dead on Canary Islands cruise ship "A powerful earthquake off the Solomon Islands generated a tsunami up to 1.5 metres (5ft) high that damaged dozens of homes and left several people missing, presumed dead.
Authorities cancelled tsunami warnings on more distant coasts in the Pacific.
Officials on the chain of islands reported two 1.5-metre waves hitting the western side of
Santa Cruz island on Wednesday, damaging 70 to 80 properties, said George Herming, a spokesman for the prime minister of the Solomon Islands.
Many villagers had headed to higher ground as a precaution. "
Solomon Islands earthquake triggers tsunami
Posted by Brizdaz (Darren) at 2/12/2013 10:09:00 PM